"Starship Troopers," by Robert A. Heinlein 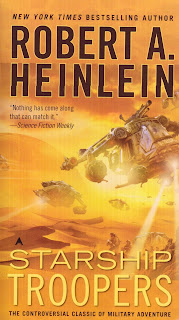 Starship Troopers is my dad's absolute favourite book of all time by one of his favourite authors of all time. So of course I had to read it for my self-imposed Parental Book Club.

But I was worried. Yes, Heinlein was part of the Golden Age of Science Fiction, but this novel was released in 1959 and I thought it would be dated. I'd overheard discussions about his allegedly stilted language and stiff characters  (especially the female ones). It certainly didn't help that certain rabidly conservative groups in the sci-fi community revered this novel for being "simple" sci-fi that focused on action rather than "agenda."

I opened this book with such lowered expectations, it shouldn't be a surprise that Starship Troopers overcame each one of them easily.

This book was nothing but surprises - the vast majority of them pleasant.

The novel follows the military career of Juan "Johnnie" Rico from the point when he joins the Terran Federation's Mobile Infantry (MI) in the 22nd century. Johnnie joins the army on little more than a whim and discovers the military is far tougher than he gave it credit for - especially once war breaks out with the Bugs, a race of super intelligent insects operating under a hive mind. However, over the course of the book, Johnnie not only falls in love with the job, but the man it's turned him into.

My first busted preconception about this book was that it would be simple and apolitical. WRONG. This book is all about politics. In the future, only Citizens (people who have successfully completed a term of military service) are allowed to vote or participate in politics. You can volunteer for the military whenever you want, and the military has to accept you (regardless of sex, age, race, religion, or ability), but then it's up to you to sweat and toil and earn your franchise. If you wash out or resign, you don't get another chance. Ever.

Sure, Heinlein is conservative, and this set-up would do nicely as the dystopia for one of today's YA novels, but you can definitely understand his reasoning - the only people who have the right to vote for society are the ones who've volunteered to put society's needs ahead of their own. The contrast between Johnnie's lifestyle before joining the military with his life after neatly outlines the novel's definition of power: Johnnie was born to a wealthy, privileged Filipino family but had no voting rights and a father who'd already picked out a career for him. He gains his power after joining the military - by choosing his own path and rising on his own merits. In this case, the power to vote is a symbol of Johnnie's autonomy.

I was also pleasantly surprised by the novel's diversity - at least comparatively, for the time period it was published in - with a Filipino hero and a cast that includes hispanic, African-American, and Japanese characters. That being said - while women are apparently "superior pilots" in the future, we only see, like, two of them, and then very briefly.

Did I agree with all the politics? Um, nope. There's a cringe-inducing chapter devoted almost entirely to the Usefulness of Corporal Punishment and how Psychology is Ruining Kids Today that made me want to shout at the teenagers to get off my lawn. And this novel takes a very cynical view of human existence that suggests that morality is a disguised survival instinct and that humans are innately savage, violent monsters.

Preconception number two: this would be an action book. Wrong again - you can blame this one on the terrrrrrrible film adaptation. There's maybe a handful of action scenes, and they're all brief. Heinlein's preferred style is to introduce the reader to a fight and then skip ahead to focus on who won, because the action isn't what's really important. Most of the novel is dedicated to military life in between combat - the training, the technology, the relationships and the social structure. Heinlein's take on the military is an extremely positive and compassionate one. The novel toes a fine line between being pro-military and being pro-war, but it manages that balance pretty well.

I went in expecting a stilted, vaguely-out-of-touch story and wound up sucked into a compulsively-readable, thought-provoking political sci-fi work. I should have known better - they don't give labels like "Golden Age of Sci-Fi" to chimps.
A-
Posted by AnimeJune at Thursday, October 08, 2015 1 comment: 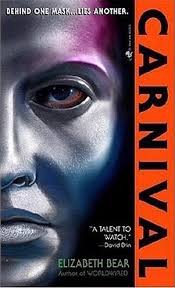 Carnival isn't perfect (it can be incredibly difficult to keep up with all the double-triple-quadruple crossing and double blinds going on), but it uses unique settings, nuanced characters, and fantastical set-pieces to ask deeper questions of the reader.
A-
Posted by AnimeJune at Thursday, October 01, 2015 3 comments: