"The Care and Feeding of Unmarried Men," By Christie Ridgway 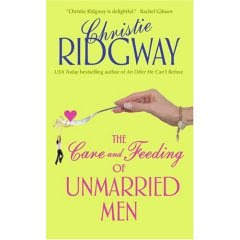 The Chick: Eve Caruso, the sexually-aggressive Party Girl who keeps the Palm Springs gossip mills running with her spicy society columns. She's sexy, she knows it, and she's also the granddaughter of a mob boss. Unfortunately, now she's also broke and being investigated by the SEC for taking an illegal insider trading tip from a vindictive ex-boyfriend.
Shady Past: She's the product of the mob boss' son and his mistress - but spent her formative years being raised by his wife. Was abused by a former boyfriend (also with Mob connections) and retains a terrifying claustrophobia from a traumatic encounter with the FBI in her childhood.


The Dude: Nash Cargill, a monster truck driver (for reals) who comes to Eve's Palm Springs resort to keep an eye on his movie-star sister when a former stalker disappears from the radar. His nickname is "The Preacher," after his admirable moral restraint. Has a soft spot for damsels in distress that he repeatedly tries to ignore.
Shady Past: His father hit him as a child, and after one of his white-knighting antics lands a man in the hospital, he's terrified that he'll turn out to be a violent man, too.


Various Evil, Scheming Men: Hey, Eve, watch as we act on the expectation that since you're hot, you're a slut!


Nash: Now I want to hit something just like my mean ol' dad!


First of all, this is the second book in a series, which I didn't know -- and it doesn't really matter. The characters from the first book appear here (as their wedding is being planned), and they're given their due, but they're still totally scenery which is just what they should be in a story that isn't theirs.


Secondly - I loved the characters. Flat-out, well-drawn, three-dimensional characters. Especially Eve - she's got so many skeletons in her closet it could double as a Tim Burton movie set. On paper it sounds like she has so many personal problems that it seems impossible she isn't a raving nutjob, but somehow Ridgway pulls it all together. Eve's a pretty interesting woman -- she responds to her relationship insecurities by being very sexually aggressive, by taking up the traditional man's role in a relationship. She's not afraid to use her smokin' body to get control of a situation (which involves some outlandishly seductive situations, some of which are hilarious), and she's always the one to break off the relationship before it threatens anything resembling intimacy. She responds to requests for intimacy with sexual temptation - a "if-he's-looking-at-my-breasts-he's-not-looking-at-my-heart" kinda deal.

She has several problems all going on at once that she has to juggle but she can't ask anyone for help - she has a wonderful, loving family with her father's wife and her half-sisters, but she can never forget that she's the daughter of her father's mistress. She's the illegitimate brat that the wife had to raise and she figures she's brought enough shame into the family without bothering them with her petty problems.


Nash, as well, is intriguing -- a white knight who's tired of being a white knight. He's had too many girlfriends who just used him as a means to fend off a nasty ex or help their kids or pay their Visa bills (all of which could fuel a romantic novel of their own), that he just wants a "normal" woman, one who's not a total basketcase, which I feel is a funny quirk on a lot of romantic cliches. He's also, you know, "The Preacher," so is a little disturbed by Eve's "sex first, probing questions later, or better yet, never" approach.
Given Eve's phobias and problems you'd think Nash would be the absolute worst person for her, but the way they finally come together and find areas that complement each other, I felt was very insightful and entertaining. The only thing I had trouble figuring out about this novel was the title, which really has no bearing on the characters or the plot of this story at all. A-.
Posted by AnimeJune at Friday, February 15, 2008