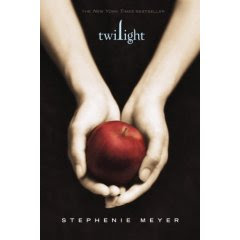 The main reason Edward ends up falling for her is because he's can't read her mind like he can everyone else's, so she has that air of mystery. But she has nothing else. I like a good hero as much as the next romance gal, but the heroine has to be worth loving too, and Bella gave very little back to the relationship, in my opinion. So, while the vampire characters were well-written and most of the book relatively pleasant, this isn't a keeper by any means, and nor will I read any of the sequels. Unless Bella finally decides to get her head out of her ass and treat people like people. B-.
Posted by AnimeJune at Thursday, April 24, 2008