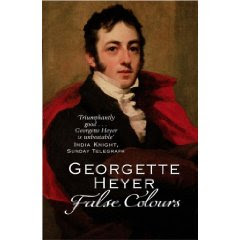 Alternate Title: Wonder Twin Powers, Activate!
The Chick: Cressida "Cressy" Stavely. Used to running her father's household, she discovers three's a crowd after Daddy marries a girl her own age, so when Evelyn Fancot proposes a marriage of convenience, she accepts.
The Rub: However, by the time she has to introduce him to her family, she's having second thoughts, so it comes as a delightful surprise when Evelyn turns out to be much more charming, funny, and insightful than she thought! But is he really Evelyn?
Dream Casting: Wives and Daughters' Justine Waddell.

The Dude: Christopher "Kit" Fancot. He returns from a diplomatic assignment in Vienna to find his twin brother got engaged in order to pay off their mother's monstrous debts and then vanished without a trace. He agrees to take Evelyn's place for one night (thinking Evelyn might show up later).
The Rub: Trouble is, Evelyn doesn't show up, and no one knows where he is. Worse - Kit finds himself falling for the witty and endearing Cressida.
Dream Casting: Topher Grace.

Kit's Mum: Deeply in debt and your brother's missing. You?

Kit: ... would pretending to be Evelyn make you feel better?

Cressy: You're not fooling anyone, Kit.

Cressy's Grandma: What do you want to do about it, Cressy?

The Word: Christopher "Kit" Fancot returns from Vienna to check on his twin brother, Evelyn, after getting a weird feeling that his more reckless and mercurial sibling might be in trouble, and falls head-first into a sticky situation.

The boys adore their mother, Lady Denville, a woman who is generous and kind-hearted but incredibly ditzy, short-sighted, and extravagent. A compulsive shopper and gambler, her expenses (and also her failed attempts to hide her expenses from her sons) have landed the family deeply in debt. Kit arrives just in time to discover that Evelyn has gone to some rather drastic measures to try and pay off their mother's costs. Their father, the deceased Earl of Denville, was afraid that his heir Evelyn might turn out to be as financially irresponsible as his wife and thus tied up Evelyn's inheritance in a Trust to be governed by his prudish brother Henry until Evelyn either a) turned thirty or b) convinced Henry he was responsible enough to be allowed his inheritance early.

Evelyn, at twenty-four, and burdened by a (not unearned) devil-may-care reputation, thought that a marriage to a perfectly proper, unexceptional girl, might be just the thing to obtain his inheritance from his uncle. He proposed to a lady named Cressida Stavely, who accepted his engagement knowing full well it would be a marriage of convenience.

Kit hears all this from his mother, as well as the hitch in Evelyn's plans: Evelyn is due at a party to be introduced to (and gain the approval of) Cressida's relations, but he's nowhere to be found. Kit is encouraged by his mother to take Evelyn's place at the party, and agrees. Innately aware that Evelyn isn't in serious trouble and should arrive soon, Kit figures he'll only have to play the part for one night to spare his (and Cressida's) reputation before Evelyn returns to fix up the mess.

At the party, Kit decides to learn a little more about this Cressida girl, because he feels loath to help his brother shackle himself in loveless marriage. He discovers a girl who is witty, plain-spoken, intelligent, and fully aware of the convenience of her and Evelyn's arrangement. Cressida governed her father's household for years after her mother died, but she knows her reign is at an end now that her father has married a vapid woman only a few years older than herself. Her new stepmother has made it more than plain that Cressy is no longer welcome, and so she accepted when Evelyn proposed.

While Kit's pretence at the party goes smoothly, the rest of the plan does not. First of all, Evelyn does not return at all, and no one seems to know where he is. Secondly, Cressida's formidable grandmother, Lady Stavely, intimidates Kit's mother into inviting them to Evelyn's country manor in order to learn more about the prospective groom. Kit, forced into close quarters with Cressy and Lady Stavely, must now maintain his facade 24/7. On top of that, he finds himself quickly falling for the winsome Cressy, but can't figure out a way to break the truth of his circumstances to her without jeopardizing everything.

This was my first Georgette Heyer novel. She's known as the Grand Poobah of the Regency Romance genre, renowned for her fantastic research and word-usage as well as her wonderful plots. The back cover blurb compared her to Jane Austen, and in many ways, it's not an unjust comparison.

For instance, Heyer's language (which I'm assuming is spot-on because I can only understand 3 out of the five expressions she uses in her dialogue and description) matches the conversational, witty, and wry tone of Austen which gives the story a fluffy, bouncy feel that hides a secret edge. Kit, Evelyn, and their mother share a loving bond expressed through amusing banter, but as the book progresses their conversations and interactions reveal a bond born out of an unspoken alliance against a cold and often dictatorial patriarch.

Lady Denville, for example, is an intensely annoying character for much of the novel - she's a reckless spender, is ridiculously stupid about how finances work, and is directly responsible for the majority of the Fancot family's immediate problems. She's driven the family tens of thousands of pounds into debt - and that's only the debt that Kit and Evelyn know about. She developed a habit over the years of hiding and obscuring her financial dealings to "spare" her family the stress of her expenditures, to the point where even she can't remember how much she owes. However, for much of the book, the other characters wrap her in cotton wool, pinch her cheek for being just so darn cute, and do their best to hide from her the true enormity of her thoughtless behaviour. For much of the book, I just barely tolerated her, and couldn't understand why everyone was so determined to protect her from the reality of her actions.

However, slowly, the book reveals the harsh reality of Lady Denville's marriage that explains a great deal of her behaviour, as well as her sons' unwavering devotion to her and Evelyn's attitude. She married an older man when she was very young, a man whose initial attraction to her whimsical and carefree nature rapidly chilled when he re-identified it as flightiness and stupidity. Lonely and unhappy thanks to her husband's distance, she looked for comfort elsewhere - in clothing, gaming, fashionable parties, and her sons, but, equally terrified of her husband's disapproval, she started attempting to cover up her financial blunders, which further entangled her situation. Her sons, upon whom she lavished the most of her affection, grew up thinking themselves her protectors from their censorious father.

And the Trust only strained the familial relations further. The Earl of Denville, judging Evelyn to be as frivolous as his wife, gave his fortune and estates into the hands of his brother Henry upon his death, to be turned over to Evelyn before he turned thirty only at Henry's discretion. Essentially, Evelyn is an Earl who has no true power over his lands or his money, and while he only appears at the end of the novel, the hints of his feelings of impotence are sprinkled throughout the novel by the testimonies of his servants and friends. Subsequently, his powerless situation only increased his desire to misbehave and act rakishly.

Other than that, the characters were refreshingly angst-free. Kit, despite his rather desperate circumstances, is a remarkably cheery and smart-tongued fellow, and it's great fun to read his banter with Cressy, who's not nearly as hoodwinked as he thinks she is. The story is told almost entirely from his perspective, but Heyer still gives us an entertaining picture of Cressy, a self-assured, confident woman untroubled by the crippling self-esteem problems that adorn so many other romance heroines. The story was complicated enough, so I was thankful for the uncomplicated character backgrounds.

That being said, the language kept me somewhat at a distance from the novel, making it a book easy to put down but hard to pick up again. I didn't find myself as emotionally involved with the characters as I am with my favourite romances. As this is my first Heyer novel, I don't know if this is because I just personally can't connect with her style, or whether this was just a Heyer dud. Overall, however, this was a very pleasant book to read - I loved the detail she lent to the setting, I liked the language. The pacing left a bit to be a desired and the ending was a little anticlimatic, but I'll definitely be trying another Georgette Heyer novel. Any suggestions? B.
Posted by AnimeJune at Monday, December 15, 2008