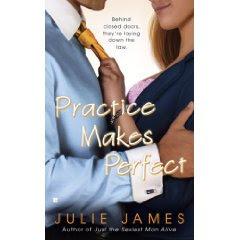 The Chick: Payton Kendall. A super-smart lawyer boasting a radical-feminist upbringing, She always feels she has to work twice as hard to impress because she's a woman, and she hates her coworker JD Jameson, whom she feels has all the easy advantages of being male, rich, and blue-blooded.
The Rub: When her firm tells her they'll only be making one of their star lawyers partner (the other star lawyer being JD), she knows all bets are off. Too bad she only belatedly discovers that, with JD, the line between hateful and hawt is surprisingly thin.
Dream Casting: Fringe's Anna Torv.

The Dude: JD Jameson. For eight years, he's continued a secret feud with Payton Kendall, a woman who insists on thinking the worst of him. Thanks to the firm's public devotion to "encouraging diversity" and political correctness, JD believes Payton gets special treatment because she's a female lawyer and thinks that's grossly unfair.
The Rub: When he learns he'll have to armwrestle with Payton over the one partner position, he wants to grind her into dust, but is hampered by his reluctant respect for her abilities ... and his secret attraction to her.
Dream Casting: Ryan Reynolds.

The Plot:
Payton: You're rich and a man, and therefore automatically evil! I hate you! ... you're still hawt, though. And a good lawyer.

JD: You're a shrew and a feminazi! I hate you! ... you're an awesome litigator, though. With a delicious ass.

The Firm: Too bad only one of you will be made partner!

Payton: It's so unfair! JD has money and a penis - a golden ticket to success!

JD: You're so sexy when you're delusional and self-righteous!

Payton: What was that?

Payton: Wow, you're hot when you're stymied!

JD: What was that?

The Firm: Wanna know who we made partner?

The Firm: Curses! Foiled by their collective hawtness!

1 Use of Jane Austen For Seduction Purposes

The Word: I first caught on to Julie James when I received a free copy of her debut novel, Just the Sexiest Man Alive, and I loved it. Her realistic, successful characters who cared about their jobs - and were allowed to care about their jobs while at the same time pursuing a romantic relationship - were a pleasure to read. Naturally, I was totally stoked to read her second novel, Practice Makes Perfect, but I held off so that I could buy the novel from Julie James in person at the RWA National Conference's Literacy Signing.

Our protagonists, Payton Kendall and JD Jameson, are both workaholic rising-star lawyers at their Chicago firm. For the eight years they've been working in the same building, they've hated each other - and both for similar reasons. Payton thinks JD has an unfair advantage because being male, white, and rich already gives him an all-access pass to the Good Ol' Boys club. JD thinks Payton has an unfair advantage because promoting and encouraging a successful female lawyer gives the firm a politically correct edge and allows them to hawk their "diversity" to the public.

Of course, because they are mature adults who grudgingly respect each other's legal prowess, they've managed to keep their ongoing feud private. They both look forward to the time when they make partner and can deal with each other less (as well as take the occasional vacation), but they get thrown for a loop when the leaders at their firm tell them that this year, there's only one open partner position available.

How this changes the story is that it makes their private, nasty battle an open, nastier battle as each has only a few weeks to prove they are the better lawyer. Thanks to the firm's unspoken "up or out" policy, the lawyer who doesn't make partner is expected to find work elsewhere. This increased pressure on their work relationship produces three interesting effects: first, both Payton and JD come to realize how childish their antagonism really is; second, both hero and heroine learn the true depths of the other's awesomeness under pressure; and third, they discover the source of much of their emnity lies in an unspoken attraction both are afraid of acknowledging.

The development of their relationship is a bit like the Cold War - both are afraid to be the first to drop their guard and be vulnerable because there's always a chance the other will exploit that weakness to their career advantage. There's also eight years' worth of grudges, mistaken assumptions, and insults to overcome - as well as the looming fact that, regardless of how their romance turns out, one of them will have to leave the firm while the other becomes partner. Because of this, the romance proceeds very slowly - our protagonists spend much of the first half of this novel simply learning how to be civil to each other, then friendly, and finally romantic. I have to admit I was a bit nonplussed by the slowness of the romance, even though it was realistic.

However, once they do get the romance underway, our protagonists move fast, and that made sense, too. Even for all their dislike, both are aware of the others' strengths. Payton always knew that JD was dedicated, determined, charming, and efficient. JD always realized Payton was persuasive, passionate, and quick-thinking. Once romance blossoms, it's easy for both characters to go from resenting their opponent's strengths to truly appreciating them.

As for the characters, I really liked JD. While more sophisticated than Just the Sexiest Man Alive's Jason, he still has a lot of man-boy flaws. While born to old money, he rejected his roots to pay his own way so that he could live guilt-free on the wealth he earned himself. I felt his concerns about Payton's advantage were legitimate, if not politically correct, and liked that his response was to work harder rather than stand around whining. He's also the more romantic of the protagonists - the first to realize that the burning sensation in his chest might not be rage, he lobs the first pitch to see if Payton returns the attraction. And as we learn by reading further into the novel, JD has liked Payton from the start but has had to hide it thanks to Payton's insults.

Payton, I have to admit, was a lot harder to like, mainly because she's a bigot. Yes, I'm serious. A lot of her resentment for JD springs from assumptions she's made about him that are blatantly untrue, based on the flimiest of evidence, and should have been destroyed the moment she had a pointed conversation with him. Eight years ago, Payton heard: "JD comes from old money" and became immediately convinced that:

1) JD is a spoiled brat who shits in a gold toilet next to the President and the Queen, and rides polo ponies to his country club on the weekends,

2) JD relies on his Daddy's support to further himself in the firm, and

Readers who've encountered JD's POV quickly discover the opposite - that JD cut himself off from his family and his trust fund so that he could live on his own salary (which, while considerable, is the same amount Payton gets). JD's actually rather proud for going off to live on his own terms, which made it doubly frustrating whenever Payton spewed her jealous, resentful bullshit about how charmed JD's life is when it's obvious she doesn't know him at all and hasn't made any effort to. One of my biggest disappointments with this novel is that I felt Payton never really confronts the complete and utter wrongness of her assumptions about JD. I would have liked to have her discover his rejection of his family connections and have to deal with the fact that her prejudices were completely unfounded.

My annoyance with Payton eased somewhat after the midway point, where I was struck in the head with a Pride & Prejudice reference, thrown by the author. Aaaaah, so Payton is Elizabeth Bennett, the one who put the Prejudice in Pride & Prejudice. Okay, I get it. Sorta. However, didn't Elizabeth's assumptions about Darcy take up all of, what, a year? Six months? With Darcy living in London for a good chunk of that time? Payton believed the worst of JD for eight years while working at the same firm. While some of her assumptions about rich people are partially explained by her hippy-radical-feminist upbringing, and a realistic grasp of the Good Ol' Boy club-ness that still exists in law firms, I just never bought that after eight years, she'd still retain such blatantly incorrect assumptions about a man she's been fixated on (for good or bad).

However, all bigotry aside, Payton is still a strong, efficient character, capable of looking out for herself and making her own choices. And she doesn't remain bigotted forever - she eventually (and thoroughly!) learns the extent of JD's charms, and romantically gives as good as she gets. There's a hilarious scene near the midpoint of the book where JD, after sawing through one of Payton's high heels to retaliate for when she dumped coffee on his suit, gets second thoughts and rushes off to Payton's trial to warn her, only to arrive too late. However, Payton recovers from the (hilariously disastrous) consequences with such confidence and aplomb that she wins her case, and JD's admiration.

Ultimately, I enjoyed this book - the dialogue was snappy, the characters interacted with each other well, and the obstacles to their romance were dauntingly real. However, while I liked it - it didn't top Just the Sexiest Man Alive. I felt the mental pacing of the romance (i.e. how the characters, in their heads, wrapped their brains around their feelings for each other) developped too sluggishly, with a lot of repetitive "Not that I notice what JD/Payton does" denials. And, as much as I grew to enjoy Payton in the later chapters, her behaviour and thought processes at the beginning of the novel just didn't make sense. Otherwise, though, it's a pleasant read with a strong heroine.
B+
Posted by AnimeJune at Saturday, August 15, 2009