"Something Wonderful." by Judith McNaught 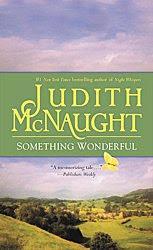 The Chick: Alexandra Lawrence. A booksmart but naive country girl, she marries the dashing Duke of Hawthorne when he accidentally compromises her. Four days after their wedding, he tragically dies at sea.
The Rub: Turns out her saintly dead husband isn't as saintly - or as dead - as she thought.
Dream Casting: An Education's Carey Mulligan.

The Dude: Jordan Addison Matthew Townsende, Duke of Hawthorne. While he's willing to marry Alexandra to restore her honour, he secretly thinks all women are scheming whores. Except that Alexandra seems so innocent...
Dream Casting: ...that is, until he returns from being tortured to discover her trying to marry his cousin! That WHORE!
Dream Casting: Zachary Quinto.

Jordan: Wow, you're kinda hot for a thirteen-year-old boy.

Alexandra: Oh, you're so manly and heroic!

Jordan: Oh, you're so innocent and alluring! Not like all the other whores--I mean, women.

Alexandra: Jordan! You lied to me and slept around and were going to lock me away in a situation that conveniently mirrors my secret daddy issues! How dare you!

Jordan: Alexandra! You got prettier and sexier and actually got a life and enjoyed yourself instead of properly martyring yourself to a ragged husk of your previous self in grief over me! How dare you!

Alexandra: You're a moron.

Jordan: You're a whore!

Jordan: I'm so sorry! I totally love you again! Stay with me?

Jordan: I'll take that as a yes! Hooray!

The Word: I was pretty excited to read this book, since my first shot at McNaught, Almost Heaven, was quite delightful. However, while the plot of Something Wonderful shares some plot similarities, and McNaught's writing was engaging enough to keep me reading, the story itself as well as the characters fell below the mark.

Our hero, using the definition very loosely, is Jordan, Duke of Hawthorne, who apparently popped out of the womb ruggedly chiseled, cynical, and deeply mistrustful of women. He's about to receive an injection of Vitamin Lead from some bandits with guns when a figure in a dilapidated suit of armour blunders in and accidentally saves his life. Jordan thinks his saviour is a pre-teen boy and takes him to his inn to recuperate. He's a little shocked to discover his hero is Alexandra, a pre-teen girl, but isn't repulsed by her like he is by other women because apparently Inherent Female Evilness occurs during puberty.

Alexandra, unfortunately, is not a pre-teen girl, but one of those oh-so-precious chestnut-haired, big-eyed, late-blooming, book-learnin' moppets that are the magical Tylenol to the Alpha Male Headache. And now her reputation is totally compromised. While Jordan isn't over the moon about being forced to marry, he finds Alexandra somewhat charming. She's so innocent, you see, and pure and unconventional - not like all dem other womens who are all mindless, shallow whores. Of course, he plans to pack his little Hannah Montana away at his cozy estate while he parties hardy with red-haired ballerinas. Yeah, all other women are evil, ice-hearted sluts, but they're more fun to bang, right?

The novel picks up the pace a few days after the wedding when Jordan is kidnapped, press-ganged, and lost at sea. Alexandra is grief-stricken but determined to prove she's worthy of the name of Townsende - however, her "I Heart Jordan" attitude convinces Society (who knew Jordan as the Duke of Slut, Viscount Slutbanger, Baron Wangtangle) that she's a moron. As annoyed as I was by Alexandra, once she figures out the truth, I rather admired her "Screw this crap!" reaction. Alexandra decides to shuck propriety and have fun, and ends up becoming the diamond of the Season.

Ugh, but then Jordan returns. Turns out he was just being tortured by the French for a year and a half and he shows up in England just in time to keep Alexandra and his genial cousin Tony from marrying each other. This is when Jordan goes from being an annoying alpha male to a hateful, certified Grade-A Pig. Despite spending a year and a half surviving on nothing but memories/fantasies of Alexandra, once he sees her he immediately jumps to the absolute worst of conclusions without any evidence and proceeds to spend the rest of the book treating her like a stinky turd.

Much like Almost Heaven, for a good slice of the novel our protagonists hate each other thanks to a misunderstanding, with the hero douchebaggin' it up Kanye-style until an inebriated servant lets the backstory-cat out of the bag and then the hero spends the remaining pages grovelling like the nasty, nasty boy he is. However, I could understand Ian's asshatery from Almost Heaven because he was purposefully tricked by a third party into believing the worst about Elizabeth - and he figured this out before the halfway mark. Jordan's main reason for hating on Alexandra stems from his outrage that his wife still isn't gnashing her teeth in the outer darkness wearing sackcloth and ashes a year and a half after his supposed death.

So yeah, Jordan was expecting to come home to a cocker spaniel of a wife who would drape herself over his legs and slobber at his feet and is miffed when he discovers she had the gall to get a life of her own. What a prince. Oh, and there's a half-assed plot to kill him which gives Jordan even more of an excuse not to tell Alexandra anything so that he can throw shit fits whenever she can't keep up.

Alexandra, however, improves over the course of the novel, and I appreciated she wasn't willing to put up with Jordan's bullshit. I did enjoy how the story involved Alexandra growing up and facing the realities of life and deciding to remain optimistic anyway. It makes her sunny nature much more realistic and powerful when she decides to do it in adversity than when she's obliviously believing the world is all sunshine and rainbows because she's never taken a step out of her hometown. While she does have some daddy issues, she doesn't agonize over them at tedious length, but instead uses them to hone her Bullshit Detector. Her dad left her and her mum to rusticate in the country on a pittance while he lived in luxury with his mistress and their child in town - so Alexandra knows she's not going to put up with that crap from Jordan and she's willing to make his life a living hell if he tries. Gotta admire that in a gal.

On the other hand, she very easily converts back to the "I Heart Jordan" team when she learns he has a sad past that totally explains why he acts like an immature little shit. He swings back and forth between the pendulums of Prince Charming and Asshole, depending on his mood, what he had for breakfast that morning, and which gesture of Alex's he idiotically misunderstood the day before. He is like this up until the very end, to the point where I think the only reason Alex takes him back is because the bullet she took to the head eliminated her ability to say no.

Another reason I'm ticked off at Jordan is that he had the potential to be, if not a huggable teddy bear, than at least a well-written character, but the book never follows through. He did endure 15 months of torture, but does this influence his character once he returns? Does he bear any scars, physical or mental? Does he even ruminate on this dark period and use it to determine how he should be living his life differently? Uh, no. We get one description of how the pain was so bad he almost went crazy and how thinking about Alexandra was the only thing that kept him alive but once he returns this entire experience is completely swept under the rug. One moment he's all "I have a new lease on life and it's going to be with Alexandra and puppies and bunnies and fluffy marshmallow clouds" and the next he's right back to being Mayor of CynicalTown, capital of Misogyny. It's obvious his captivity was just a plot device to keep him out of the picture for a year. I guess amnesia was too unrealistic.

And as for the "suspense plot," don't bother. It's just there to provide another excuse for Jordan to wipe the mud from his boots off on Alexandra's prostrate backside. I should say spoiler alert before I go on because there's no way you could guess who the villain is - not through any ingenuity on the story's part but because we only ever meet the villains once, and their motivations are flimsy to the point of farce. Jordan's aunt claims she and Bertie, her crippled son, wanted to kill Jordan for his money - despite the fact that she could have just asked for money whenever she pleased from the nephew who adored her as a second mother. Bertie's motivation is, uh, I guess that he has a bum leg, and he's angry at people who don't have bum legs. We only get a page of explanation for their repeated attempts to murder the hero, because the whodunnit isn't as important as the excuse their attempts give Jordan to abuse Alexandra even more now that he suspects her of attempted murder - along with general whorishness, disobedience, and feistiness.

On the plus side is the fact that I couldn't really stop reading this book. The pacing and the drama kept the pages flying through my hands, even as I wanted to enter the book and kick Jordan in the face. Something Wonderful was a bit like a soap opera that way - the characters were exaggerated and the writing occasionally florid (Jordan is described as "ruggedly chiseled" no fewer than three times) and the situations unrealistic - but holy crap, WHAT HAPPENS NEXT? For all my harping on the hero, the book was actually enjoyable and quick to read, and the heroine (for all that she gave into the hero too often for my comfort) was entertaining to watch develop, which nudged this book just out of C+ territory.

I have two other of her books on my TBR (the polarizing Whitney, My Love and Until You) to see if Almost Heaven was just a fluke or whether Something Wonderful was just Something Random. Here's hoping for the latter.
B-