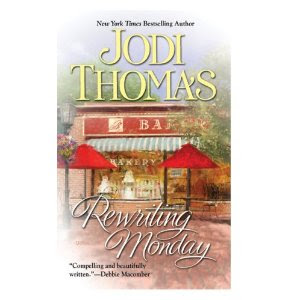 The Chick: Pepper Malone. When an indiscreet mistake causes her big-city journalism career to implode, she takes a dead-end job working at the smalltown Texas paper The Bailee Bugle to give herself some breathing room.
The Rub: Pepper has no intention of growing roots, but as the Bugle comes under attack from a mysterious man with a grudge, she discovers she cares about the town - and especially its reclusive newspaper editor - far more than she thought.
Dream Casting: Liv Tyler.

The Dude: Mike McCulloch. Family duty stuck him in the editor's chair at The Bailee Bugle, but for the last ten years he's only been going through the motions.
The Rub: A hot-shot reporter from Chicago could be just the person to convince him the cards life dealt him aren't as bad as he thought.Dream Casting: Scott Patterson.

Pepper: I need a job, I guess. I don't really care.

Mike: Sure, take this job, I guess. I don't really care.

Pepper: This must be my fault!

Mike: This must be my fault!

Pepper: Why am I caring about people now? It's so uncomfortable and itchy!

Mike: Why do I care about Pepper? She's just going to leave!

The Word: Reading Rewriting Monday, my first book by Jodi Thomas, was an interesting experience. Reviewing it will be even more interesting, since, thanks to my Choir Tour, it's been more than a week since I read it. While it has some good things going for it and it looked like it had the sort of characters I normally love, Rewriting Monday had a number of glaring flaws.

In the book's introduction, our heroine Pepper Malone crawls into the teeny-tiny town of Bailee, Texas, with her former hot-shot-journalist tail between her legs. Back in Chicago, she'd made the incredibly boneheaded mistake of turning her ex-boyfriend's pillowtalk into an embarrassing expose. Her superiors, thinking she'd earned her story on her back, fired her, and her ex's influential family threatened to do even worse.

Disgraced and nearly broke, she decides to hide out in her mother's hometown to lick her wounds and wait out the shitstorm her life's turned into. However, she has no intention of sticking around permanently, or getting to know the people, or establishing any kind of connection.

In order to pay the bills and continue to eat, however, she applies for a job with The Bailee Bugle, a town weekly paper edited by Mike McCulloch. In a town where everyone knows everyone, Mike is an odd duck, a reclusive, anti-social single dad who's content to spend his days in his office and his nights raising his orphaned niece. Mike's not very forthcoming, but with some digging Pepper finds out that Mike grew up in the shadow of his hometown-hero brother Dave, only to have his own independence cut short when his brother died and family tradition dictated that he take over The Bugle as editor as his father, grandfather, and great-grandfather did before him.

"Content" is probably the wrong word for Mike. Emotionally, Mike's running on fumes. In true George Bailey style, he feels like family duty derailed the life he really wanted. He never chose to be editor, he never chose to stick in Bailee, but a hundred years of tradition and his guilt over his brother's sudden death keep his ass in the editor's chair. The only thing in his life that he doesn't regret is his rambunctious 13-year-old niece, the only family he has left.

Normally, even in a town the size of a postage stamp, Mike and Pepper would have no reason to interact beyond work, but all unwittingly, when Pepper becomes a Bugle employee, she becomes involved in a sinister and escalating war between The Bugle and a nefarious individual who wants the newspaper put to bed - for good. Pepper initially fears that whoever is vandalizing the building, leaving phone threats, and injuring the other writers is doing so at her ex's behest, but Mike fears the man may have a personal grudge against him. These two people, who have intentionally isolated themselves, find they have to rely on each other, and a slow-burning, very sweet romance develops. For the most part.

I should like Pepper and Mike's romance. I think. It's pretty unconventional by romance standards - a schlubby, shy, and nerdy hero paired with a promiscuous, commitment-fearing heroine. But it's like both characters sort of crossed the line until their own unconventional characteristics become unpleasant. Pepper avoids emotional ties pathologically, but I never felt she had enough motivation to explain the extent of her commitment-phobia. A+ books Going Too Far and How To Knit a Wild Bikini both have seriously isolated heroines that I loved, because they were more developed so their isolation and enforced apathy is sympathetic. I felt Jodi Thomas' treatment of Pepper's isolation was more shallow, and thus many times Pepper comes across as selfish and careless.

I mean, yes, her dad died and she was dumped in boarding school, but how does that explain absolutely no friends, no trusted colleagues and three broken engagements? The novel explains none of this - and if you're reading this book right now and are holding out for when we find out the details behind this supposedly "embarrassing" story of Pepper's that ruined her career, don't bother. We never really learn what she published and we never hear from her ex again until, in the purest of contrivances, he briefly appears to provide a paltry page-long romantic rivalry before vanishing once again.

Similarly, I have an addiction to sweet, slow-moving and underestimated heroes, so Mike should have been catnip, right? The bookworm little brother to the golden-boy football star who went off to war. The schmuck who ended up doing all of the work, with none of the fame that should have come with it. The thing is, like many aspects of this novel, he just takes it a little too far, crossing the fragile barrier between brooding and sad-sack. Mike is just a little too depressing and empty and dull. I sort of wondered why he'd just sat there for ten years instead of doing something if he was so miserable. The novel sells his trapped existence so well that by the end of the novel I'm not totally convinced of his happiness.

Neither of these characters were terrible, but if they'd just been a tad more subtle and underplayed they might have been great. It's a similar deal with the secondary romance, which plays out in a much more conventional fashion between a sugary-sweet baker who's as flaky and weak as her pastries and her gruff FBI ex-husband who's Too Manly To Make Friends.

There is good to this novel, though. I really enjoyed the portrayal of Bailee - a town that only seems small and insignificant to a big-city gal like Pepper. As Pepper begins to research into the town's history to find something, anything newsworthy, she discovers a wealth of kind and brave acts that built the town up into what it was. The suspense plot (I wouldn't really call in a mystery) was also well done, smoothly integrated into the plot and a constant threat, but still allowing for the characters to develop and actually have some, you know, fun. The supporting cast (at least those that weren't trying to knock boots) were all endearingly portrayed - each possessing enough colour and depth to be memorable without overwhelming the story with quirkiness.

While this was by no means a terrible, or even unentertaining novel, I will have to say I was less than satisfied. While the setting was good and the romantic pairing was unconventional, I wish the main characters had either been downplayed, or provided with enough character development and motivation to justify the extent of their foibles.
B-
Posted by AnimeJune at Tuesday, May 11, 2010