"One Touch of Scandal," by Liz Carlyle 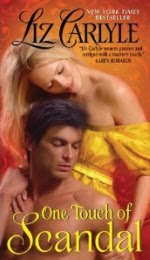 The Chick: Grace Gauthier. An innocent governess, when her employer/fiance is murdered, she's fingered as the number one suspect.
The Rub: She tries to go to a family friend for help, only to discover he's out of town and she has to settle for Angsty McGoo instead.
Dream Casting: Sinead Keenan.
The Dude: Adrian Forsythe, Marquess of Ruthveyn. Vaguely psychic, vaguely antisocial, but completely angsty - Adrian feels a strange urge to help this falsely accused governess - but he has no idea why!
The Rub: His vaguely psychic powers render commitment impossible - because his visions can't help but spoil the ending of every relationship he attempts.
Dream Casting: Richard Armitage.

Grace: Woe is me, my fiance was murdered and this cartoonishly-developed police commissioner thinks I did it!

Commissioner Napier: Woe is me, I'm supposedly a dedicated lawman but I miss totally obvious clues to further the novel's suspense!

Several Other Psychic Dudes: Woe is us, our books will clearly have to wait for later!

Ruthveyn: Hey, how come my powers don't work around Grace?

Mad Scientist Doctor: I like to call it "The Edward-Bella Effect."

Grace: Whatevs. Let's get it on!

Evil Villain: Please excuse me while I try to kill you!

Grace: Huh, despite the fact that this book is FULL of psychic people, NONE of you saw this coming?

Ruthveyn and the Other Psychic Dudes: *stare off into space, whistling*

The Word: Liz Carlyle is a interesting writer for me - some of her books hit (Never Deceive a Duke), others really hit (Tempted All Night), while others are a swing and a miss (Three Little Secrets). It makes it difficult to decide when to buy her books, and it provides me some comfort to know what her latest book, One Touch of Scandal, came as a free ARC from RWA 2010.

If I had to describe this book in one word, it would be underdeveloped. There are a lot of interesting ideas, a lot of good directions this book could have gone in, and some lovely writing, but it rarely follows through on any of them. We get a mishmash of underdeveloped ideas, underdeveloped characters, and hanging plot threads galore. A classic case of an author so preoccupied with setting the groundwork for a series that she doesn't concentrate on making the actual first story cohesive or understandable.

Let's begin, shall we? Our heroine, Grace Gauthier, is still reeling from the shock of losing her fiance, Edward, whose throat was slit by a mysterious assailant. Thanks to the investigation, she's barred from seeing her fiance's stepdaughters (to whom she used to be governess), and since Edward was her boss before becoming her boyfriend, the police (particularly the commissioner, Napier) are tempted by the easy "Blame the Nanny" crime-solving rule.

With no relations willing to help her, Grace is forced to try and find Lord Lazonby, a friend of her father's, to ask for his help. This takes her to the St. James' Club, a.k.a. the Fraternitas Aureae Crucis, a.k.a. The Psychic Dudecave. Unfortunately, Lazonby (a mysteriously hot and sexually ambiguous fellow whose dark past screams, morse-codes, and carrier-pigeons Sequel Bait) is out on an "errand," but his BFF Lord Ruthveyn is willing to help.

Why? Oh, yeah, because Ruthveyn is interested in her - more specifically, in the fact that he can't "read" her the way he can other people. Ruthveyn has a very vaguely-described psychic power where he can read people's emotions and possible futures by touching them or looking them in the eyes. This apparently makes him very angsty, because he screwed up his marriage with his last wife when he saw their marital future in a vision while doing the nasty. This could have been a very interesting problem - if the novel had bothered to develop or explain it, instead of simply repeating, over and over, that it Sometimes Happened, for No Particular Reason, and that When It Happened, It Was Bad.

So yeah, Ruthveyn wants to protect Grace, particularly from Keystone Cop Napier, a sketchily-drawn, easily-baited character who demonstrates no real investigative skill. And of course, the only way Ruthveyn can protect Grace is to hire her as a governess to his nephews and live in his house.

And as for the rest of the plot - there isn't any. The bland mystery is easily solved at the end, isn't paranormal at all, and is really more of an excuse for Grace and Ruthveyn to get together for no reason. Most of the book is Grace trying to find out what Ruthveyn's problem is while Ruthveyn (rather impressively) manages to shove in pages and pages of exposition about the Psychic DudeClub and their origins and genetics and mad science that nevertheless explains absolutely nothing about his own power and how it works. It reminded me really, really strongly of Amanda Quinn's Arcane Society series.

This novel is just so chock full of narrative holes it's impossible to read it without falling in one. Like why the deceased Edward wanted to marry his governess in the first place, considering she had no money, is half-foreign, and neither of them loved the other. Or what, exactly, Ruthveyn did for the Crown to have the grateful Queen keep him first on her speed-dial? Or, most importantly, WHAT are the perimeters of Ruthveyn's power and the exact mechanics of it that make it work in certain situations? He barely uses his power and yet it consumes his entire mindset. These are all valid questions that could have spun off into interesting and engaging paranormal stories but instead are blandly settled with half-assed conclusions.

Look, I understand about needing to maintain some narrative mystery to encourage people to keep reading a series but one needs to remember that even the first story in a series requires a conclusion that satisfactorily closes the door on something. This is Ruthveyn's story - therefore, an explanation about Ruthveyn's past and powers should be resolved in this book.

Even worse are the characters. Grace isn't bad, but is from Standard Heroine Casting - blond, wistful, no living family worth mentioning, wuvs children, yawn.

As for the secondary characters, they're bland and easily skippable - with the creeeeeepy creepy exception of Ruthveyn's sister, who's dubiously memorable for her insistence on making lewd suggestions to Grace - about sleeping with her own brother. Um, ick.

This book could have been good - Carlyle has a beautiful writing style, and she drops hundreds of hints about Ruthveyn's past and the Psychic Dude Society's possible purpose, but she fails to pick them up again or resolve any of them. By the end of the novel, I was entirely dissatisfied - the romance wasn't wholly developed because too much time was spent on the psychic worldbuilding - and yet the psychic worldbuilding didn't satisfy because it explained nothing and was entirely irrelevant to the murder mystery that starts off the plot in the first place.

My suggestion? Protect your reading future. Skip this book.
C-
Posted by AnimeJune at Thursday, November 04, 2010