"The Dovekeepers," by Alice Hoffman 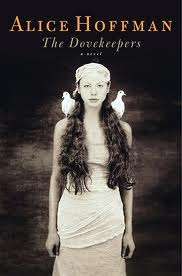 Yael: When her mother died in childbirth, her father raised her to believe she is cursed, already a murderess. When the destruction of the Temple forces them into the desert, she discovers how strong a person she really is.

Revka: With her husband and daughter murdered by the Romans, she arrived at Masada with her life in tatters, trailing two mute grandsons and a maddened son-in-law who lives only for pain. Believing her life is already over, she is astounded to learn there still is hope, even in the bleakest of times.

Aziza: Born a girl, she was taught by her mother Shirah to assume a boy's life in order to protect herself and her family. Here in Masada, she finds her woman's duties clash with her boy's warrior instincts.

Shirah: Raised in the ways of a now-outlawed Jewish cult, she is distrusted and despised as a witch, and yet will still provide aid and assistance to those who ask. While her spells can bring about fantastic change, she's also seen her fate (and the fate of her children) and knows that escaping it will be next to impossible.

Amram: Yael's brother and Aziza's lover. He is a warrior for the Zealot cause, but even he can be led astray by love.

The Man from the Valley: Revka's scholarly son-in-law. When his wife was brutally violated and murdered, he dedicated himself to a life of violence and self-inflicted pain, running into battle heedless of injury or death.

The Man from the North: A Welsh soldier forcibly conscripted by the Romans and then enslaved by the warriors of Masada, he befriends the women of the dove cote - Yael in particular.

Eleazar Ben Ya'ir: The leader of the rebels of Masada - he spurs and leads them on to victory with his persuasive speeches. But he is still only a man beneath all that glory.

The Word: Really, there are both too many and too few words I could use to describe Alice Hoffman and the effect her writing has on me. Her magnificent use of setting, and character, and magical realism can make every story come alive in a different way. She's one of the few authors whose books I can become fully-immersed in. I haven't reviewed too many of her books (or at least, as a whole review), because even a year ago I was still determined to be a "romance" blog. Now, I'm more of a book blog that leans strongly towards romance and YA but I'll still read just about anything and review it, too.

I went into this book with equal parts eagerness and curiosity - curiosity mainly because this is an historical novel, whereas all the other books of hers I've read have been set in modern times - well, her novels anyway. She's had a story collection or two where it started in an historical period, but never as far back as this. I wondered how she would incorporate her magical grasp of setting and description into an environment as distant and exotic as this one (Judea, circa 70 A.D.).

The Dovekeepers is a story about Masada - the fortress that protected Jewish rebels and their families from invading Roman forces for four years after the fall of the Temple in Jerusalem - told through the eyes of four women who helped cared for the doves whose leavings kept the fortress' gardens and orchards fertile. These four women detail how life brought each of them to the fortress in the desert and how life in that confined, arid place changed them, for better or worse.

The novel is divided into quarters, each told from a different woman's viewpoint, a tactic I enjoyed. Yael's story begins first - as she spends the most time wandering around in the desert with her father before finding the fortress. Yael was raised to believe she was worthless, but she discovers her true worth once she and her father are left to fend for themselves, and she brings that strength with her to the fortress, where in the presence of other women she blossoms even more.

Revka's portion comes next. Her story deals in themes of hope and renewal, just as when all seems lost. She lost nearly everything she cared about in her journey to Masada, but it's with the other women in the dove cote that she learns to cherish and find joy in what little she has left.

Aziza's portion of the book examines gender. As Roman forces begin to gather in earnest as Masada becomes the last holdout against total occupation, Aziza struggles with both her feminine and her masculine identities. She is a sister and a daughter and a lover, but despite a law that forbids it, she is also a warrior and cannot stand idly by with the women while their brothers and cousins and husbands are dying.

Shirah's part comes last, which is fitting. She's the most mysterious character, and the one who offers the most opportunities for Alice Hoffman's lovely is-or-isn't-it-real magical thinking. Women with supernatural abilities are a prominent theme in a lot of Hoffman's books (Practical Magic, The Probable Future, The Ice Queen) and this comes across more potently in this particular setting, when religion and superstition had far more influence. Shirah is definitely a descendent (or, ha ha, in this particular instance, an ancestor) of the aunts from Practical Magic - distrusted by other women for being the Witch of Moab, she is still approached by them in their times of need for her cures and spells. But even as she helps women (and she performs special favours for all three of the other protagonists), she's also a woman with fears and desires and flaws of her own.

As each protagonist gets her point of view, we also get to see the other three through a new lens, and the result is a multi-layered portrayal of female friendship and support during a time of crisis. While male characters do wander in and out, and a few lay claim to our heroines' hearts, the changing viewpoints keeps the focus on the women. The men often find themselves struggling to find space in the heroines' stories, rather than the other way around and I found that highly refreshing.

As I mentioned earlier in my review, Alice Hoffman's fantastic description gives life at Masada heat and smoke and smell. The woman who described different types of rain in The Probable Future, here gives us a world dictated by heat and water, and the overabundance and scarcity of both. Her use of imagery and symbolism is marvelous - the very nature of the protagonists' job creates a fantastic contrast of themes. Masada, a stronghold of warriors and rebels, is mainly sustained by the contributions of gentle, beautiful birds that are symbols of peace. If not for these birds, the orchards would die and the warriors and all their talk of blood and freedom would waste away.

The Dovekeepers is fantastic book - with a strong feminine focus, memorable characters, gorgeous description, and lyrical writing that produces hope and light even in the face of an inevitably tragic event.
A+
Posted by AnimeJune at Saturday, February 25, 2012