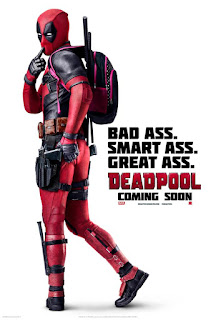 I used to think of Ryan Reynolds as the Sriracha of comedic actors.

A small amount of hot sauce can improve and even save a meal, but you wouldn't want to eat an entire bowl of Sriracha. To me, the distinctive rapid-fire silliness that made Reynolds so utterly delicious in supportive roles (Blade: Trinity, The Proposal, Adventureland), rendered him nigh-unbearable as a leading man (Green Lantern, Van Wilder, Just Friends).

Deadpool has proven me wrong. Instead of trying to cram Reynolds' sarcastically-edged peg into a hole rounded smooth by G-rated studio conventions and merchandising, the filmmakers carved out their own jagged, self-referential, unrepentantly crude film to fit Reynold's talent.

Reynolds was born to play Deadpool. His indefatigable energy, rat-a-tat delivery, and pure maniacal glee radiate from the screen. He's remarkably light-footed for a man carrying an entire movie on his shoulders. Don't get me wrong, the film rocks a solid supporting cast (except Ajax, a villain so cookie cutter I'm beginning to wonder if his blandness was intentional), but you would have no movie without Reynolds.

The plot is refreshingly simple compared to the superhero films that came before - there's no time travel, no alien invasions, no magical hot tubs of electrical prophesy. Just a merc with a mouth on a mission. Reynolds plays Wade Wilson, an impulsive, violent, vulgar soldier for hire who finds himself diagnosed with terminal cancer. A shady agency offers him a miraculous cure, but the process mutates him and messes up his face, so the impulsive, violent, vulgar supersoldier calls himself Deadpool and vows to track down the villains responsible.

The revenge-and-rescue plot is as old as time itself, but it's effective - instead of wearing itself out trying to convince a jaded audience that the entire universe is (once again) in danger, Deadpool relies on a relentless barrage of expertly-delivered and utterly inappropriate humour, interesting characters, and relatable stakes.

Even better - despite supporting appearances from a couple of third-string X-men characters, Deadpool works excellently as a stand alone film. I walked into this movie with little to no knowledge of the character and I understood the film perfectly. As much as I admire the work and planning that goes into the consistency of Disney's Marvel universe, the later films rely on so much pre-existing narrative that few of them are enjoyable on their own anymore.

Labels: A Plus Reviews, Movies