"If You Could See Me Now" by Cecelia Ahern 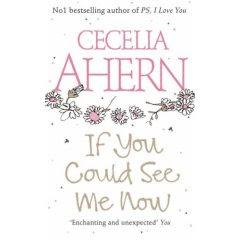 Yes, ladies and gentleman, this is the book I got at a bargain book store for the sole reason that I'd heard Hugh Jackman was going to be in a film adaptation of it. I hadn't read Cecelia Ahern before, but the idea behind the book appeared cool at first glance: a woman caring for her sister's child ends up falling in love with his imaginary friend (to be played by Jackman in the movie, I'm guessing).

Our protagonist, Elizabeth Egan, is a severely repressed control freak interior designer who specializes in calm, unthreatening colours and designs. Oh, and who obsessively cleans when she's bothered, which is a lot. Her rampant personal problems are related mostly to a series of over-familiar fiction tropes: 1) She wasn't loved enough as a child, 2) she's been secretly repressing a dark family secret, and 3) she's basically sacrificed any hope of a social life in her small Irish town due to her abusively selfish, alcoholic (and most likely mentally ill) sister Saoirse (pronounced Sear-sha).

Our other protagonist, Ivan (who bears a striking resemblance to Hugh Jackman...) is a professional imaginary friend. Yup - he has a boss and coworkers and meetings and everything. His last best friendship has recently ended (as most of his friendships are bound to), and he finds himself attached to a cute six-year-old named Luke. Luke's a pretty well-adjusted kid, considering that his mother Saoirse barely acknowledges his existance and his aunt Elizabeth (his legal guardian) has a pretty low tolerance for the chaos of childhood and child-raising in her rigidly ordered life.

At first, Ivan thinks this is just another case of play-with-kid, give-kid-tips-on-life, kid-stops-seeing-him kind of deal -- but that stops Elizabeth, an adult, starts detecting his presence. As Elizabeth eventually starts to see him, as well, Ivan realizes his assignment may not be to help Luke, but Elizabeth, overcome personal problems and learn how to adjust to life.

As a novel, If You Could See Me Now is a quick, easy read, but it's the kind of book where I think a movie adaptation might actually be a better fit for the story than the original novel. For one thing, there is a lot of redundant introspection in this book on Elizabeth's part, most of it dealing with her feelings of failure with her crazy-ass mess of a sister, her fears that she might fail Luke in the same way, and her unanswered questions about why her mother could never stay and take care of her for more than three weeks at a time. Her actions and reactions to events around her demonstrate these feelings and needs perfectly well, and a visual narrative would tidily eliminate the navel-gazing narrative that gets repetitive pretty quickly.

It might also make Elizabeth and Ivan's romance a little easier to believe. According to the description, Ivan's an unusual imaginary friend in that he looks like a slightly unshaven, adult man (most of his coworkers look like kids or pets) - but his narration reads like he has the mindset of a seven-year-old. It makes sense to his character, as he relates to kids very easily this way, and it's his job to be, psychologically, at their level, but this makes his suddenly adult yearnings for Elizabeth a little bizarre, especially as he describes his feelings for Elizabeth in his characteristic childish fashion ("Elizabeth is my most favourite," etc.).

The story's also painted with a fair number of broad strokes, and the narrative is hampered by a total dependence on unrealistic coincidences. There's a scene where Luke shows Elizabeth a picture he drew of his imaginary friend, and she's surprised that Luke's friend doesn't appear to be a child like himself, but a six-foot-tall man. She sees this as an odd fact, and then promptly forgets it, which seems uncharacteristic. Elizabeth is (repeatedly) described as someone who renounces all magic and imagination (as her own dreams never came true, *tear, tear*) so if I were in her shoes and found out my kid had a "secret friendship" with a strange adult, I'd have been at the police station asking for descriptions of nearby sex offenders faster than you can blink.

Especially once Elizabeth starts seeing Ivan for real. The book leans her obliviousness on the shaky excuse that Elizabeth has rendered herself deaf and blind to fantasy, but the fact that it takes so long for her to put two and two together (Luke's imaginary friend = six-foot-tall Ivan --> Mysterious stranger = also named Ivan, also six feet tall and buff) strained my disbelief to the limit. She spends almost the entire novel convinced that Ivan is the concerned father of one of Luke's school friends, despite the fact that Ivan makes several attempts to correct her and that no one else in town seems to see him. Elizabeth just conveeeeeniently misunderstands everything Ivan and her friends and coworkers say about her conversations with apparently empty air. And those same coworkers and friends just as conveeeeniently misinterpret her one-sided conversations, so that she conveeeeeniently isn't ordered to endure psychiatric counselling.

It eventuallys gets to be too beyond belief. It's redeemed a little by the end, which keeps the novel from falling completely into the fairy-tale abyss, but it's Ivan who actually keeps the story going. Yes, his narration sounds a little youngish, but his observations are cute and his interactions and reactions to Elizabeth are quite entertaining. While I enjoyed the concept of a woman falling in love with an imaginary friend, the redundant description, poorly-explained dark secret, broad characters, and unrealistic happenstance kept me from enjoying the book completely.
Crush du Jour Rating: