"A Princess of Roumania" by Paul Park 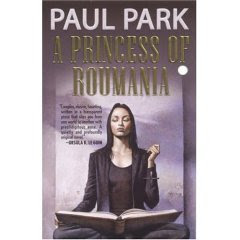 It's been a time-honoured tradition for little girls and boys in doorstop-thick fantasy novels to turn out to be princes and princesses in exile. They may have believed their lives were meant to be lived as orphans, pigkeepers, valley girls, or beggars, but whisk them off to a magical land, and they're suddenly royalty. Such fantasy tropes, like any other aspect of fantasy, can contribute to an excellent story when done well -- but they are done so often that the tedious, uninspired stories always outnumber the truly good ones.

Well, thank goodness for Paul Park, then. His A Princess of Roumania seems rote when described on paper. Miranda, an orphaned girl adopted by American parents from an orphanage in Romania, is whisked off to an alternate world, where she is really Princess Miranda Popescu, the one shining hope for alternate Roumania's uncertain future.

However, the punch of the story comes from the details that follow after the logline: Miranda, with her friends Peter (a troubled one-armed kid from school) and Andromeda (her outrageously popular, blond, BFF) are whisked into said alternate world only to discover that the supposedly "real world" of shopping malls, colonized American states, and a thriving United Kingdom was actually a fictional creation written by Miranda's aunt Aegypta and ninety of her best scholars to protect Miranda from her enemies. Romania's Communist despot Nicolae Ceaucescu, in a quirky bit of metahumour, turns out to have been named after Aegypta's enemy the Baroness Nicola Ceaucescu. The real world, it seems, is still sunk in a hellish 19th-century rut, the Germans are gaining power, and the British Empire has been all but annihilated by a tidal wave.

Meanwhile, the Baroness Nicola Ceaucescu, partially responsible for how Miranda and her friends were pulled out of the book Aegypta put her in, finds her problems mounting when Miranda does not magically materialize in Roumania (as Nicola planned), but instead arrives in a Massachusetts populated by savage British refugees. The impoverished and debt-ridden Baroness was set on selling Miranda to the Germans currently threatening Roumania, and with that avenue closed to her, tries to manipulate the Germans to disastrous effect.

So yes, Miranda is a princess -- one important enough to merit a host of baddies intent on her death or capture, as well as a covert league of allies loyal to her family. But Park adds so many bizarre, subtle details and plot twists (a murder mystery, a stolen gem, a boy who grows an extra arm that isn't his) that I have no idea what direction this trilogy is going in, only that it stands to be a good one, if this beautifully written introductory book is any indication.

Thoughtful Adam
("Deceptively simple, original use of a tattered fantasy stereotype. A-.")
Posted by AnimeJune at Wednesday, June 27, 2007