"The Raven Prince" by Elizabeth Hoyt 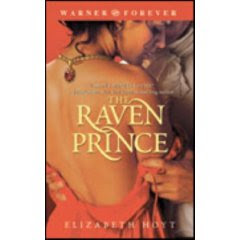 The Chick: Anna Wren, a mousy widow who hires herself out as a secretary to keep herself, her kindly mother-in-law, and her maid in stockings and sewing needles. As hard as she tries to keep herself as proper as a widow should be, she's frankly tired of seeing men frequent whorehouses and remain blameless.
Shady Past: Her late husband cheated on her with the village belle, and Anna blames her barrenness for his infidelity.


The Dude: Edward de Raaf, the Earl of Swartingham, a brooding, temperamental, pox-scarred nobleman who returns to his ancestral home to spruce it up for his intentions to find a bride. Despite his attractions for Anna, he's afraid his scars repulse normal women and turns to whores instead.
Shady Past: He lost his entire family to the smallpox that scarred him, and his first wife died in childbirth cursing his ugliness.


The Plot:
Edward: I need a secretary!


Edward: You're hired! Wait - you're a woman? I'll just use my patented remedy for unwanted attractions to proper widows - one visit to a whorehouse, on the double!


Anna: Here are those papers you asked for.


Edward: I'm ugly and you're lustful!


Anna: You're sexy and I'm in love with you!


Edward: Yeah, I like your version better. Marry me!


The Word: I actually enjoyed this, for the most part. I particularly emphathetized with Anna. While yes, she did go beyond the social strictures for Georgian widows, she was aware she was doing so, and she had believable and relatable reasons to be exhasperated with social norms. Edward managed to be the stereotypical overbearing, arrogant, dark, broody, beast hero and still seem completely new and layered. The sex scenes I skimmed- I do with most romances I find, nowadays. Graphic sex scenes make me uncomfortable and bored so I skim to make sure I'm not missing any crucial character development and go on to the parts that matter - the dialogue and description. Whoo damn, great dialogue! I loved Anna and Edward's repartee. Edward's first lines - muttering obscenities at a horse - grabbed me and really clued me in to his character. I found the epilogue to be a little convenient - *kinda spoiler* I mean, it's nice Anna found out she could have kids but this development was just out of the blue and seemed too easy. Other than that, though, a great story. A - (yeah, I'm getting rid of the Crush du Jour Rating - I was tired of uploading images all the time. So sue me.)