"Sins of Midnight," by Kimberly Logan 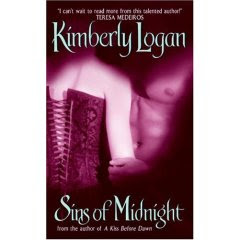 The Chick: Lady Jillian Daventry, the curvy, ebony-haired, scandal-courting eldest daughter of a Marquis. Of course, her scandals have nothing to do with actual scandal, but instead in her secret investigative partnership with the Bow Street Runners.
Shady Past: Four years prior, her mother was murdered and her killer apparently committed suicide - but Jillian believes the real criminal is still out there.

The Dude: Connor Monroe - a wealthy trademan, who sports auburn hair, "aqua eyes," and a sculpted bod, natch. Someone out there with an insane grudge is murdering his closest friends and confidantes, and he'd like to find out who.
Shady Past: Grew up in the London Streets with an evil stepfather while protecting his vulnerable brother Brennan.

The Plot (in dialogue):
Connor: My friends are dying! I need a Bow Street Runner!

Jillian: But we have to keep our partnership a secret!

Connor: I see. Well, how 'bout I reminisce about my past and blame myself for everything that's ever gone wrong, ever, while you proceed to do all the work and disobey everything I say, ever, while remaining obsessed over your dead mom?

Jillian: As long as we can squeeze some kissyface humpysex in somewhere.

The Word: M'eh. The mystery's kinda obvious - cat's outta the bag once Connor says, "Oh, I should tell Jillian everything - except anything to do with Brennan. Yeah. Cause he's dead. Totally dead. Didn't find his body, but he's got to be dead." Jillian and Connor are alright - but neither has any defining characteristics that I could root for or empathize with. As for the romance - they spent more time telling themselves why they couldn't do it, than actually doing anything. While I think a certain amount of internal monologue is necessary - the story should take place more out of the characters' heads than in.