"Devil in Winter," by Lisa Kleypas 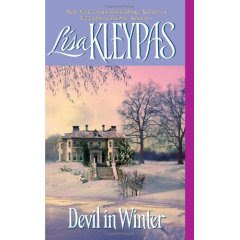 The Chick: Evangeline Jenner, a voluptuous redhead whose beauty is buried underneath terrible-fitting clothing, awful maternal relatives, and an almost complete lack of self-esteem. Kept under lock and key by her deceased mother's family, the only thing she has going for her is the enormous fortune she stands to inherit from her dying gaming-magnate father. However, she decides that if she wants to be free of her relatives' clutches once and for all in time for her to see her father before he dies, she proposes to the only man powerful enough and yet desperately poor enough to consider marriage to her at a moment's notice -- Viscount St. Vincent.
Shady Past: Um, how about neary twenty-five years spent locked up in a house with relatives willing to beat her, insult her, marry her off to her own morbidly obese cousin, and very possibly murder her for her inheritance? Shady enough for you?

The Dude: Sebastian St. Vincent -- after making an abysmal hash out of his attempting to kidnap and forcibly marry Lillian Bowman in It Happened One Autumn, he's not only cut off from his spendthrift Duke of a father -- now he's broke and friendless, because, well, the Earl of Westcliff has a weird thing against people who try to steal his girlfriends. So when Evie shows up, willing to trade control of her soon-to-be-inherited gambling fortune in return for the husbandly protection of his Viscountcy, how can he say no?
Shady Past: A lifetime of debauchery. Oh, and "lady issues" stemming from the deaths of his mother and four sisters during his childhood to spice up the mix.

Evie: I'll trade you One Inheritance in return for a Quickie Marriage, please.


Evie's Evil Relatives: You can't have her!


Westcliff: The cure for bullet wounds - a renewable of friendship!


1 Romantic Use of Protagonist as Human Shield


The Word: Aaah, I've heard so many raves about Devil in Winter. At first I thought I would enjoy this even more than It Happened One Autumn. One of my reasons for loving Autumn was because it was an especially well-written example of the complete-opposites attract combo, and so I assumed Winter would be even more so. I mean, St. Vincent actually threatened to rape Lillian in the last book (although in this novel he and Evie conveniently come to realize that his character would never have allowed him to do such a thing) -- now, imagine him being paired up with the almost pathologically-shy and abused Evie? Shouldn't this be awesome?


Don't get me wrong - for the most part, the novel is wonderful. As usual, I love Lisa Kleyas' dialogue and description, but there were parts of the plot and characterization that seemed a little...easy, if you know what I mean. Evie shows a little spunk in the earlier novels, but for the most part she was kind of the weak link sandwiched as she was between the fiery Bowman sisters and the can-do Annabelle. However, she recovered a lot of spunk very VERY quickly for this novel that seemed a bit at odds with her supposed history of near-constant abuse. I don't doubt that with the gumption borrowed from her fellow Wallflower friends, she would have proposed marriage to St. Vincent, but I kind of doubt that after that she would keep calling the shots as confidently as she did and was so ready to trust a man so obviously sexually threatening.


The book also picks up plot points only to discard them rather quickly -- there's the ill-fated attempt St. Vincent makes to convince Evie of the dangers of germs that's quickly abandoned, her evil relatives vanish after only one attempt to get her back which seemed kinda lame considering the lengths they'd gone to to break her spirit and steal her money, and Evie's whole "no sex after marriage cause you're a mean libertine who's not gonna break my heart, oh no, oh no" deal is pretty easily (and very willingly) set aside after a very short amount of time.


That's not to say this book didn't contain its own charms - Evie in many ways is the perfect match for St. Vincent - her moments of fragility throughout the novel serve as potent reminders of just how much of an ass he's been with women his whole life, and his humour serves to keep her from falling into a pit of despair. Also, the fact that St. Vincent isn't just redeemed, but finds a job that he does well and enjoys doing well, also contributes mightily to his character development. Plus, the reaction of the fellow Wallflowers to Evie's quickie marriage is almost worth the price of the book itself. B.
Posted by AnimeJune at Monday, March 24, 2008