Re-Review: "An Offer from a Gentleman," by Julia Quinn 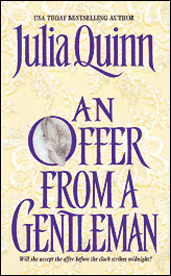 The Chick: Sophie Beckett. Turned into an unpaid servant by her evil stepmother after her father dies, Sophie takes a huge risk by crashing a masquerade in a mask and borrowed gown. She falls for Benedict Bridgerton, but when the clock strikes midnight, she's forced to flee.
The Rub: Two years later, when Sophie and Benedict's paths cross again, he doesn't recognize her, and Sophie doesn't remind him.
Dream Casting: Scarlett Johansson.

The Dude: Benedict Bridgerton. At a masquerade hosted by his marriage-minded mother, Benedict runs into (and swiftly falls for) an unknown masked woman. For months (and years!) after she mysteriously vanishes, he still can't get her off his mind.
The Rub: Two years later, he finds himself attracted to Sophie, a simple housemaid, but feels as if he's somehow "cheating" on his masked paramour.
Dream Casting: Alex O'Loughlin.

The Plot: (borrowed from last review)
Benedict: Marry me!
Sophie-in-Cinderella-disguise: No.
Benedict: Be my mistress!
Sophie-years-later-as-servant: HELL no!
Benedict: NOW marry me!
Sophie-returned-to-solvency: Okay.

The Word: I'm not going to be doing re-reviews of all the romance novels I've read in the last couple of years, but I feel it my duty to do so with this one, primarily because a) I'm only just now reading it within the context of the Bridgerton series as a whole, b) I didn't read it this time while writhing in a hospital waiting-room for six hours waiting for the doctors to tell me I didn't have appendicitis and c) I enjoyed (and understood) it so much more this time around!

If The Viscount Who Loved Me was thematically centered around fear, than An Offer from a Gentleman is focused on identity. Sophie, right from the start, is a woman with an uncertain identity. A bastard, although her father never officially acknowledged her, he provided her with the upbringing and education of a gentlewoman. However, he dies unexpectedly, leaving the two daughters of his new wife dowries and Sophie nothing (apparently). However, he does stipulate in his will that if his Countess (i.e. the evil stepmother) wants to receive three times her allotted allowance, she has to keep Sophie under her roof until she turns twenty. This spiteful, evil woman does exactly what we expect her to do: she quickly turns Sophie into an unpaid maid-of-all-work, and Sophie, an illegitimate child with no other living relatives, complies because she knows she has nowhere else to go.

Sophie's upper-class education and upbringing prevent her from being satisfied with the hard, thankless life of a servant and keep her from truly connecting with other people of the servant class. On the other hand, her bastard status bars her from the gentry, so from the very beginning, she is a woman stuck between two worlds, ultimately belonging to neither.

Benedict Bridgerton, meanwhile, has identity issues of his own: on paper, he sounds downright bland. He's not a rake, he doesn't have his brother Anthony's Daddy Issues, he doesn't have a dark or secret past, he hasn't been shaped by a tumultuous childhood or bad relationships. While he appears briefly in the previous Bridgerton Books (The Duke and I and The Viscount Who Loved Me), his presence was more identified by who he wasn't - Benedict was the one who Wasn't the Viscount (Anthony), Wasn't the Rake (Colin) and Wasn't the Child (Gregory).

Instead, Benedict's identity is, like Sophie's, suspended in the middle, albeit in a more low-key way. He's the quintessential Middle Brother. Raised in a family of eight chidlren, as the second-born son he doesn't have the responsibilities that eldest Anthony has, but he's also too old for the rascally ways of Colin (little Gregory's still at Eton in this novel).

While never neglected or passed over, he's never been in a position to assert his own identity - unlike, say, Anthony, whose cautious, controlling personality necessarily came to the fore when he assumed the title of Viscount upon their father's death. For his entire life, Benedict has been surrounded by loud, talkative, supportive, and loving brothers and sisters, so he's never really been on his own long enough to really find out how his identity extends beyond the labels of Brother and Son.

And at the beginning of the novel, he's sick of it. Attending his family's masquerade ball in a black mask, he's chased around the room by Society misses and their mamas, who, tellingly, pursue him for his simplistic identity as a popular, wealthy Bridgerton, rather than his personal identity as Benedict (they refer to him as the "Number Two" Bridgerton).

Just then, Sophie sneaks into the party in an antique borrowed dress and a demimask. Her fairy godparents (the late Earl's loyal servants who resent serving the Countess and her daughters while the Earl's biological child slaves for no pay) have arranged for her to have one magical night off, provided she return by midnight so that her stepmother and -sisters (who are also attending the ball) won't find out.

It is a testament to Julia Quinn's superb use of theme and symbolism that Benedict and Sophie's first meeting occurs during a masquerade, when the identities Society gives them can be hidden while their true identities shine through. The honest fiction of the event allows Sophie and Benedict to meet and share an hour of pure connection untainted by the influence of class barriers. However, the clock strikes twelve all too soon, and Sophie flees.

Two years pass, and fate brings Sophie and Benedict together again. Sophie found work as a housemaid in the country after Evil Stepmother (who discovered her Cinderella act) gave her the boot. Benedict searched for the mysterious woman in the silver dress for months, and even though he's now given up on the idea of ever finding her, he still carries a torch for their one moment of blissful understanding. Unbeknownst to him, so has Sophie.

When Benedict saves Sophie from being raped by her employers' drunken son and offers to find her a position in his mother's household, Sophie is sure that he'll recognize her - and is honestly disappointed when he doesn't. However, as much as she would love to tell him the truth about that one glorious night, she keeps it to herself, convinced that nothing could ever come of it. After all, Benedict is a wealthy gentleman, adored by the ton, and Sophie is simply a bastard housemaid. Best-case scenario, he would ask her to be his mistress, and Sophie's endured the sting of bastardy too long to even consider inflicting that taint upon a child of her own.

Even while these two characters try to hide their true hearts from each other, their souls' compatability can't be denied - and the rest of the book details how incredibly difficult it is for both Benedict and Sophie to remove the masks that Society has given them.

I've heard other fans of JQ say they love her books precisely because they DON'T need pirates, or vampires, or bands of gypsies, or ridiculous wagers to fuel valid, realistic conflict. This has never been more true than with An Offer From a Gentleman, which has just been bumped up ahead of Duke and Viscount as my favourite book in the series (granted, I haven't read the other five yet, but I'm getting on it, don't worry!). Here, the characters maintain the conflict, and they do so believably because they are realistic, well-written characters.

Benedict in particular - Sophie's a more understandable character because her problems are firmly established in the prologue, but with Benedict, we aren't clued in to his precise character by the backcover blurb ("This soulful, damaged Duke..." "The dastardly spy with a dark secret...." etc. etc.), and only through reading the novel do we discover who he is, piece by piece. He's also realistically influenced by his environment and upbringing - that is, he is a Rich Boy, through and through. Not that he's a bad Rich Boy, by any means, but a lot of the conflict between him and Sophie (particularly once they realize their feelings for each other), springs from his sheltered idealism that prevents him from truly understanding what Sophie's been through. I loved this - I've encountered too many interclass romances where the Noble, Wealthy Hero is just so Understanding, Tolerant, and Uncaring of Society's Rules and understands the Valiant, Poor Heroine completely.

Not so in An Offer from a Gentleman. Benedict's never known a day of true hardship in his life, bless him, and he sees no reason why Sophie can't be his mistress (but not wife - he still has some standards) and live happily with rainbows and puppies with him. Sophie is more of a pragmatist, and I couldn't help but cheer for her every step of the way, even when she refuses Benedict (which she does often). This heroine's got some serious common sense, y'all. Some Romance Heroines think they can break Society's frivolous barriers by stomping their feet and tossing their tempestuous (often red) hair. And on the other end of this wide spectrum, we also have Heroines who dig in their heels when faced with a HEA for completely arbitrary, contrived, and silly reasons (see: my hatred of the "he never says he loves me" cliche in my recent Corny Cliche Roundup).

Sophie occupies the blessed middle ground - she has a realistic understanding of how Society works, and is determined to squeeze the best life she can into the tiny square of existence she is permitted. And as the book progressed, even I was screaming "Hang society! Just get together you two, damn it all! Have lots of sex and babies already!", but I never once doubted Sophie's reasons or considered her irresponsible or selfish. I believed her reasons and actions, even if I didn't agree with them.

There are very few flaws to be found in this book, but I'll note the only one that currently stands out to me: Violet, Benedict's marriage-minded mother, states early on in the novel that she wouldn't mind if her children married paupers (albeit of staunch moral character and impeccable breeding), so long as they married. But when Sophie is placed in her household by Benedict (who wants to keep her close so he can eventually wear her down into agreeing to be his mistress), the perceptive Violet seems to figure out the relationship between the two quite quickly. However, she seems curiously amused about it, which seemed out of character. I don't know, but if I was a Regency-era mama who found out my son got me to hire his potential mistress as a ladies' maid for my daughters, I wouldn't chuckle over it, I'd be pissed!

But this is only a minor quibble. An Offer from a Gentleman is an intricate, subtle, and refreshingly character-driven romance that only improved upon a second read. It had a lovely overarching theme, well-drawn, sensible, but romantic characters, and Julia Quinn's characteristically witty dialogue, not to mention a great fairy-tale premise. I recommend this wholeheartedly. Hell, I recommend the series wholeheartedly (at least the first three books I've read), if you haven't tried it already. A.
Posted by AnimeJune at Wednesday, November 19, 2008