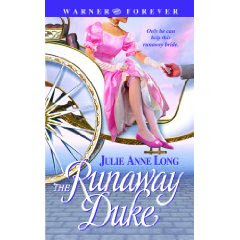 The Chick: Rebecca Tremaine. In an attempt to catch her older, prettier, more proper sister in the middle of a tryst with a dissolute nobleman, she is caught with him instead, and to save her honour she's forced into an engagement with him.
The Rub: She's far too Fiesty and Redheaded for her foppish fiance - and she'd much rather read scientific journals and practice medicine than embroider cushions for the rest of her life.
Dream Casting: I'm running out of redheaded actresses! I went for Bryce Dallas Howard again.

The Dude: Roarke Blackburn, Duke of Dunbrooke - a.k.a. "Connor Riordan." To rebel against his abusive nobleman father, Roarke joined the army - and used the Battle of Waterloo to fake his own death. Now working as a groom for the Tremaine family, he can't bear the thought of Fiesty, Redheaded Rebecca being forced into an unhappy marriage.
The Rub: The dukedom he abandoned isn't doing too well in his absence - especially now that it's managed by a former mistress of his who managed to con her way into the position of Duchess of Dunbrooke.
Dream Casting: Jonathan Rhys Meyers.

The Plot:
Rebecca: Caught you!

Edelston, Dissolute Nobleman: No, caught you!

Rebecca's Parents: No, caught YOU!

Connor: *fake Irish accent* So, you don't want to get married, then?

Rebecca: Oh no, I'd much rather be a doctor, seeing as how it's such a successful career choice for a woman in 1820s England!

Edelston: Waaah, my fiancee ran away!

Edelston: Ahem, waaah, my fiancee ran away with the incriminating piece of evidence I was blackmailing you with that proves you're really a Secret Ho!

Connor: I love you Rebecca Tremaine, because you're Fiesty and Redheaded.

Rebecca: I love you Connor, because you're awesome and true....

Rebecca: ... scratch that. I never want to see you again.

Rebecca: Who am I kidding? I love you, because you're a Duke with a Sad Past.

Edelston and Cordelia, Awesome Villains: What about us?

Connor, now Roarke: I'll pay you a thousand pounds if you ship off the States, and we'll be even.

1 Tortured Hero with a Daaaark Past

The Word: At the beginning of the novel, we are introduced to our heroine, who is Spirited, Independent, and Improper, as evidenced by her Red Hair - Rebecca Tremaine. She also has a sister, Lorelei, who is everything that she is not - blond, conventionally beautiful, and proper. In an attempt to one-up Lorelei, Rebecca tries to catch her in the act of holding a secret tryst with Anthony Edelston, a local baron. Unfortunately, Lorelei is late, so when Edelston shows up he mistakes Rebecca for Lorelei in the dark and shoves his tongue down her throat. The two are caught in a compromising position and forced into an engagement.

But Rebecca cannot stand being shackled in marriage - her Fiesty, Redheaded Spirit rebels against it utterly. An avid reader of her father's scientific journals, she would much rather be a doctor.

Yes. A doctor. I very nearly carted this book off to the secondhand store right then. I've come across my fair share of anachronistically feminist characters in historicals, but Rebecca Tremaine tops the whole lot. She likes reading about science - that's fine. Her daddy lets her play with his guns - less fine, but not quite a dealbreaker. But when she demonstrates her secret heart's desire to be a doctor, my responses were, in this order - 1) "Ahahahahahahahahahahaha." 2) "Oh shit, she's serious." 3) "Bitch, please."4) "Dammit, not another one of these twits again," and 5) "This cannot end well."

The setting of this story is 1820s England. If this were, say, in Laura Lee Gurhke's preferred time period (1890s), I might find this slightly more believable. But in the 1820s? What the hell kind of Fiesty Redheaded dreamworld is Rebecca living in? Men wouldn't let her practice on them. Other women wouldn't let her practice on them. She'd never be allowed into the colleges to train properly. Besides - which one would she prefer to be? A physician (diagnosis and theory) or a surgeon (actual physical contact)? The doctor who worked both in theory and on patients never came into being until later on in the century. Rebecca ends up mending a bullet wound later on in the novel - which would make her a surgeon (physicians in the early 19th century kept their gentleman status by not touching their patients) - and surgeons were tradespeople.

The first chapter of this novel was so hard to read because my mind kept screaming: "No no no no NO NO NO THAT'S WRONG AND WOULD NEVER HAPPEN!" Eventually, for the integrity of this review, I forced myself to continue reading even though it became obvious that Rebecca was clearly a mentally deranged individual with no concept of how the world around her worked.

Anyway, her fiance Edelston is a cad - he's up to his eyeballs in debt, and is so casually evil it's rather hilarious. Upon the announcement of the engagement, the first thing Edelston does is conjure up ideas of the many ways in which a wife can "accidentally" die and leave her husband her fortune. He also drops a few words expressing his interest in wife-beating during a regular conversation.

Rebecca turns to Connor, her loyal groom (who secretly pines for her, natch), and expresses her fears about the upcoming nuptials. Connor, entranced by her Fiesty Redheaded Spirit and horrified at the idea of it being trampled beneath the emotionless wheels of holy matrimony, agrees to help smuggle her out of the country - maybe even to America. Connor (who gave up his constricting title as the Duke of Dunbrooke by faking his death during the Napoleonic wars) wants to go because it's the place where a man may earn his own way off the sweat of his back, instead of being born into privilege. Rebecca wants to go because she's heard magical fairy tales about a country wild and disorganized "Where they might tolerate female doctors," she hopes. Honey, 19th-century Americans were rebellious. They weren't retarded.

The fiery Titian heroine with outlandish ideas and the uber-villain in the first chapters were very difficult to read - but thankfully, the novel picks up a bit after Connor and Rebecca get the hell out of Dodge. Edelston, it turns out, isn't really an uber-villain - but rather a stupid and generally harmless young man with a bad taste in jokes who needs Rebecca's dowry to fend off his creditors. When the engagement is announced, he sends a letter to a noblewoman he's been blackmailing to tell her that it's all cool, he's not going to need to milk her for cash anymore, and he's willing to hand over the incriminating evidence he's been holding against her.

The woman shows up at the Tremaine estate with remarkable promptness - Cordelia, the Duchess of Dunbrooke. True to his word, Edelston tries to produce his evidence - a gold locket with Cordelia's portrait inside that reveals details about her background that don't correspond with the story she's been telling the ton. Unfortunately, unbeknownst to Edelston, Rebecca swiped the bauble on her way out the door with Connor, not knowing what it was but thinking it could be pawned for cash to fund her escape.

Cordelia's determination to recover the locket and protect its secrets far exceeds Edelston's desire to retrieve his fiancee, and she sends paid ruffians after the fleeing couple. When certain circumstances reveal to Cordelia that her locket is not only in the hands of another, but in the hands of the one man who, were his true identity known, could unseat her from her place of power in Society, her plans to thwart Connor and Rebecca's flight become decidedly more serious.

Cordelia went a long way towards saving this novel from an F grade. She is easily one of the best-written villains I've read in a romance novel - a woman of grey morals and subtle nuance, her character is embroidered with realistic motivation and inner turmoil. Lots of cheesy romance villains seem to be bad just for the sake of being bad - but Cordelia experiences moral doubt and (gasp!) actual emotions. I've always thought the best villains experience moral quandaries because their ultimate choice to do the wrong thing is much more frightening and sad to read about than a villain who only thinks "me me me, mine mine mine."

Edelston was also a uniquely written character - hapless, thoughtless, and gutless, he's a ninny, but a ninny with character and, yes, a capacity for good as well as evil.

As well, Julie Anne Long possesses a truly beautiful and original writing style that was a joy to read - I particularly loved her descriptions and her observations on society. So I loved her style and I loved her villains - so why didn't I like this book?

Because I hated the protagonists and couldn't believe their relationship for a moment. Not only is there a physical age gap between Connor (29) and Rebecca (18), the emotional age gap is even wider. I've always been fairly creeped out by romances in which, at one point, the hero as an adult knew the heroine as a child. While I can tolerate it sometimes, in The Runaway Duke this aspect of the relationship only enhanced the ick factor between them both. Connor and Rebecca have known each other since Rebecca was twelve, and Connor refers to her throughout the entire novel as "wee Becca" - her childhood nickname. Even after their relationship becomes sexual, he continually treats her like a child - he controls nearly every aspect of their trip, he lies to and omits the truth from her "for her own good" (a fairly common romantic Hero trait, sadly) and dumps her to be babysat by a band of Gypsies while he gallops off to solve his problems alone ("to protect her").

To be fair, Rebecca contributes by acting like a child. Yes, readers, she's not only an anachronistic feminist, she's an infantalized anachronistic feminist - a book-smart street-dumb nitwit who has no idea how the world operates around her and stares and pokes and touches things with an eternal gaze of slack-jawed, wide-eyed wonder. She does a number of cutesy and very silly things "in the name of science!" that only enhance her ineptitude, and I continually questioned her relationship with Connor - he always seemed more of a parent to her than a lover, and I never bought their sexual relationship.

Anyway, on top of all of those problems, count a climax that deflates far too quickly (and ultimately gives neither protagonist what they were looking for) and an important character who inexplicably disappears, and you have a generally unpleasant read. However, I'm not going to give up on Julie Anne Long just yet. This was her first novel, after all, and despite the hackneyed plot and loathsome protagonists, she produced some exceptionally fine writing and demonstrated she could write vivid, three-dimensional, motivated characters - even if they were the villains who were forced to cede pride of place to Miss Doctor Horrible and Captain Hammer-Headed. C-.
Posted by AnimeJune at Saturday, November 15, 2008