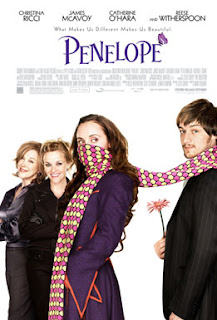 The Chick: Penelope Wilhern. Born under a curse that left her with the face of a pig, Penelope has lived an isolated life in her family's elaborate mansion, waiting for the time when her curse could be cured by marriage to one of her own kind (that is, a blueblood).
The Rub: She's spent so much time waiting to be married and free of the curse, all the while keeping herself hidden away so as not to embarrass her lauded family, she hasn't had the chance to live a life of her own.
Casting: Christina Ricci.

The Dude: Max Campion. A down-on-his-luck gambling addict, he's hired by an ambitious reporter who wants Max, the blue-blooded scion of the once-esteemed Campion family, to offer himself as Penelope's suitor in order to snap a picture of her and prove her existence to the tabloids.
The Rub: Max doesn't intend to fall in love with Penelope, but he can't marry her because he has a secret past that makes him unworthy of her.
Casting: James McAvoy.

The Plot:
Penelope: Hey! Anyone want to marry me and break the curse?

Max/Johnny: Sorry I couldn't marry you, but I couldn't have fixed your curse.

1 If not Totally Bad, Than At Least Morally Dark Grey Parent

The Word: Oh, how I loved this film. I'm a fan of fairy-tales, you see, in nearly all their forms and versions, and Penelope is a movie that unabashedly bases itself on fairy tales while keeping to rules of its own. The story is thus:

Once upon a time, there was a girl named Penelope Wilhern. Penelope was born under a curse cast on the Wilhern family centuries ago - she was born with the face of a pig, and only by uniting herself with one of her own kind could the curse be broken. Her parents, members of the kingly Wilhern family, figured this meant that if a young man as blue-blooded and aristocratic as Penelope herself would agree to marry her, despite her looks, then Penelope would be free and the Wilhern name would no longer be disgraced.

Penelope grew up alone in her parents' mansion, waiting for the day a handsome prince would agree to marry her. Once Penelope came of age, her parents hired a matchmaker and suitor after impeccably-bred suitor was brought before her. Despite Penelope's charm, intellect, and enormous dowry, suitor after suitor fled in terror.

One of those suitors, a slimy prince named Edward Vanderman (Simon Woods), tried to go public about the Wilhern's "pigfaced monster" but was denounced as a fool and a lunatic. To recover his good name, he and an intrepid reporter named Lemon (Peter Dinklage) hired Max Campion, an impoverished gambling addict who was nevertheless as indigo-blooded as they come, to offer himself as a potential suitor in order to take a picture of Penelope with a hidden camera and prove her existence to the world.

However, once the luckless prince met the ugly princess, love bloomed quickly and unexpectedly. Even more unexpectedly, once Penelope stepped out from behind the one-way glass and revealed hereself, Max didn't run away. However, Max refused to take her hand in marriage, and fled - albeit not before smashing the hidden camera and destroying all evidence. Penelope was heartbroken.

However - despite her heartbreak, Penelope has an epiphany. Her conversations with Max revealed a whole world she'd never seen, a whole world she'd been missing because she'd been too busy hiding in her mansion and waiting for someone else to come and decide her fate. Wrapping a scarf around her remarkable nose, she escapes her mansion for the first time to live her own life.

This delightful, gorgeously-shot, and romantic movie asks the question: what if Cinderella put down her mop? What if Rapunzel climbed down out of her tower? What if the fairy tale princess wanted to discover what life was like without a prince or a cure or a spell to help her?

This movie answers all those questions with style and flair. Penelope, as played by Christina Ricci, is an engaging character. While she's honest about herself and how she looks, she knows she deserves better reactions than the ones she normally gets - and she's also not above doing whatever it takes to survive on her own (even if it involves selling photos of herself to the press to make ends meet) and away from her parents.

And her parents - her father (played wonderfully by Richard E Grant) is loving and supportive, but her mother ... Well, let's just say that if anyone is this movie's villain, it would be her. Played with nice comedic timing by Catherine O'Hara, while Jessica Wilhern loves her daughter Penelope and ultimately means well, to her, it's all about appearances. It becomes clear in the movie that she cares more about her daughter's face (and how it reflects on the Wilhern family name), than her daughter herself. It gets to the point where she would rather marry Penelope off to a slimeball blueblood who hates her so long as Jessica finally gets the perfect daughter she can show off in public.

And James McAvoy - well, let's just say he makes a (dare I say it?) perfectly charming prince. The film does a good job of indicating his gambling addiction and his self-loathing before his encounter with Penelope inspires him to change his ways. He takes the job the reporter offers because he needs the money to gamble, but when he's offered the girl he loves, coupled with her enormous fortune, he still has the strength of mind to do the right thing and say no. One of the main "twists" of the movie (SPOILERS) is that it turns out he isn't Max Campion. Mistaken for his gambling partner, our hero is really Johnny Martin - the son of a humble plumber. He knows (or thinks he knows) that Penelope needs to marry a blueblood in order to break the curse and he can't bear the thought of letting his selfish feelings for Penelope destroy her dream.

The set design and direction of the movie all contribute to give the film a trippy, colourful and absurdist tone that suits the fairy-tale aspect of the story perfectly. It's a bit like the late and lamented Pushing Daisies that way. Colours are big and bright, reactions are exaggerated, situations are amplified - and all without losing emotional weight and resonance. Visually speaking, Penelope is pure eye-candy. Writing-wise, it's brain-candy. Romance-wise, it's heart-candy.