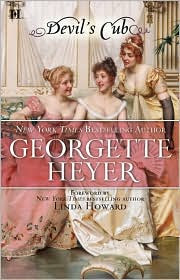 The Chick: Mary Challoner. Her spoiled sister Sophie is infatuated with the rakish Marquis of Vidal, and plans to trap him into marriage, but Mary knows a duke's son would never stoop to marry a common bourgeois. When Mary intercepts a note for a secret rendesvouz meant for her sister, she goes in Sophie's place to prevent her sister from ruin.
The Rub: Unfortunately, Mary fails to plan for Vidal's boiling fury when he discovers her deception - and is abducted to France against her will.
Dream Casting: Sense and Sensibility's Hattie Morahan.

The Dude: Dominic Alistair, Marquis Vidal, a.k.a. the "Devil's Cub." Dominic's reckless and provoking antics have always estranged him from his father, the Duke of Avon, but when he shoots a man in the chest in a gaming hell during a drunkenly-arranged duel, that's the last straw. Dominic's ordered to flee to the Continent to wait out the scandal - but it doesn't mean he can't spirit off some lightskirt to entertain him on the way.
The Rub: He's outraged to find he's absconded with the wrong sister, but, assuming Mary must be as skanky as her sis, he whisks her off to France, certain a few pretty dresses and baubles will shut her up. However, he rethinks his assumptions of Mary's willingness when she shoots him in the arm.
Dream Casting: Brandon Routh.

Duke of Avon: Son, you shot a man in a duel! Go to your Continent RIGHT NOW, young man!

Mary as "Sophie": This terrible yet inexplicably attractive rake thinks he can ruin my sister, well, he can think again!

Mary: *unmasked* Ha ha! Got you! That's your cue to say "I would have gotten away with it too, if it weren't for you meddling..."

Vidal: GET ON MY BOAT BEFORE I MURDER YOU.

Vidal: It's business time, baby. If you're quiet, there's a diamond necklace in it for you...

Mary: How about not? *flees*

Vidal: Why don't you want me?

Mary: Because I'm not good enough for you and your parents hate me.

The Word: My first experience with Georgette Heyer, False Colours (not to be confused with the homosexual romance by Alex Beecroft of the same name), was a "m'eh," but a pleasant "m'eh." While the language was lovely and the period details spot-on, the story was a bit light for my tastes. Despite the "terrible" predicament the protagonists were in, everyone was just so constantly genial. Still, Heyer's style and reputation were enough to make me give her another try - so I went with Devil's Cub, which from what I'm heard is to Heyer the way Lord of Scoundrels is to Loretta Chase and Bet Me (my first romance novel ever read and reviewed on this site) is to Jennifer Crusie.

The result: So much better than False Colours.

Dominic Alistair, Marquis of Vidal, is known as the Devil's Cub thanks to his outrageous behaviour in public and Society's remembrance of his father's equally infamous exploits. However, Vidal and his father (the Duke of Avon) often find themselves at odds - Avon apparently reformed after marrying Vidal's mother (the events that took place in Heyer's These Old Shades), and he strongly disapproves of his son's scandals, but his own wicked past prevents his son from taking his reproachful lectures too seriously.

Mary Challoner, however, takes Vidal's reputation all too seriously when he starts flirting with her shallow but beautiful ditz of a sister, Sophie. Their ambitious mamma Mrs Challoner sees this as an excellent opportunity to rope a duke's heir into marriage, but Mary knows better. The Challoners, despite their noble surname, are middle-class (Sophie and Mary's father was gentry, but was disowned on account of his ignoble marriage to a commoner). While Vidal might readily partake of Sophie's physical charms, Mary realizes all too well he has no regard for her lower-class reputation and certainly no desire for marriage.

When Vidal's temper gets the best of him and he shoots a man in a gambling hell, his father orders him to leave for the Continent. Before doing so, Vidal seduces Sophie, convinces her to be his mistress in Paris, and arranges to deliver a note with the time and place they should meet. However, the note is mistakenly sent to Mary instead. Determined to save her oblivious, selfish, and spoiled sister from ruin, Mary disguises herself and meets Vidal in Sophie's place, intending to unmask herself after a few miles and convince him the trick was Sophie's idea. Surely, she thinks, this will disgust Vidal enough to leave Sophie alone and Mary will return home a few hours later with no one the wiser.

Vidal, from his experiences with Sophie and Sophie's mother, arrogantly assumes that Mary is just as loose, frivolous and vulgar as they are. He assumes her story is a front for her own ambition to ensnare a duke's heir, and figures once they're in Paris and he can buy her a few dresses and jewels she'll shut up and let him have his way with her. However, he underestimates Mary's practicality and common sense.

While the inciting incident that starts the action may be Mary's abduction, the romance doesn't really get going until Mary, with a stolen pistol, shoots Vidal in the arm when he tries to approach her. Vidal reacts with amazed admiration and slowly dawning horror - admiration that Mary actually had the balls to pull the trigger on him, and horror that her story might be true and that he actually did abduct a virtuous woman against her will, instead of a scheming minx who was playing hard to get.

I'll admit it was difficult to like Vidal in the first couple of chapters (Mary and Vidal don't meet right away - there's quite a bit of preliminary set up). He's spoiled, arrogant, and callous - in the first chapter alone, he murders a highwayman, leaves his corpse on the road, and continues on to his party without feeling any remorse. He has a reputation for being a master marksmen, and has apparently killed many men in duels without any compuction. He's used to getting what he wants, when he wants it, and gets very, very angry when he doesn't.

However, after Mary shoots him, Vidal gets his first heaping spoonful of shame and personal responsibility. When the only people he hung out with were degenerate drunks and gamblers and wastrels like himself, Vidal never really understood the human consequences of his actions - only when he realizes how virtuous, practical, caring, and intelligent a woman Mary is, does he realize that someone inevitably always pays for his crimes, even if he doesn't. He actually unbends enough to propose marriage to Mary, and nothing surprises him more when she politely refuses.

Mary has grown used to being the practical one, and a bit in her sister's shadow. "Cursed" with too much common-sense, she never received as many suitors as the beautiful Sophie. Since her social-climbing mother considers marriage prospects to be above all else, Mary was treated as the lesser sister and was never expected to amount to very much. Mary, therefore, does not expect very much from life, and is used to dealing with less without being a martyr or very angst-ridden. This subtle characterization helps explain her refusal to marry Vidal. She does love Vidal for his passionate nature and disregard for what others think of him, but her own experience with her parents' interclass marriage (and the ostracisization her father underwent after marrying beneath himself) convinces her a marriage would only ruin them both. But that doesn't mean she gives up on a life for herself - if she can become a governess or a milliner and works hard enough, surely she can work her way up to something respectable.

With all of this dark broodiness and self-realization, there's also a lot of light madcap fun and humour, mostly from the secondary characters like Vidal's delightfully kooky mother and his friends and relatives as they react to Vidal's alleged elopement with Mary and chase after the pair to either support them, separate them, or lessen the scandal - all the while trying to keep the strict Duke of Avon from finding out.

And nothing beats Georgette Heyer's characterization. Even the secondary characters are well-described, and their motivations understandable. My favourite character- and romance-establishing scene emerges thus: along with the main romance, Vidal's high-strung and spoiled cousin Juliana leads the secondary romance with her lower-born paramour Frederick Comyn. When the two have a horrendous falling out, the heartbroken Comyn proposes marriage to Mary to get her out of her predicament with Vidal. Mary agrees, and they flee to find a priest.

Vidal finds out, and leaps into a carriage with a repentent Juliana to give chase and prevent the nuptials. The chase is not nearly as important as the misery both pairs of mismatched lovers experience together. Comyn and Mary are both the calmer, more practical members of their respective relationships, just as Vidal and Juliana are the more passionate and high-spirited. Trapped in a rambling carriage together, Comyn and Mary bore each other to tears, while Vidal and Juliana constantly snipe and bitch at each other. In this one hilarious passage, Heyer demonstrates without ever explicitly saying so how much Mary's life is enlivened by Vidal's presence, and how Vidal's temper is soothed by Mary's practicality (the same can be said of Comyn and Juliana).

Many have called Georgette Heyer the Grandmother of the Regency Romance (Jane Austen's the Great-Grandmother, don't worry), and now I finally know why. She takes tropes that are now so common and commonly misused in Regencies (reformed rakes, virtuous less-pretty sisters, stern aristocratic fathers) but backs them up with good storytelling, a well-rounded cast of developed secondary characters, and beautiful settings and details. I believed in Vidal and Mary as independent characters, just as I believed in their romance and why it worked. I was going to give this book an A- because the end got a little exasperating with the amount of interruptions and needless conversation and last-minute chases, but reviewing how much I purely enjoyed this book regardless, I settled on a full:
A