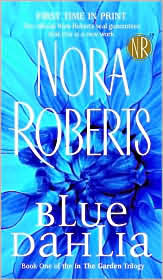 The Chick: Stella Rothchild. A widow with two young boys, she moves to Tennessee to take over as manager of In the Garden, a plant and landscaping nursery run by wealthy Rosalind "Roz" Harper. She's eager to start alphabetizing and organizing invoices and creating spreadsheets...
The Rub: If only the devastatingly studly landscaping designer Logan would just toe the line with her new way of organizing things! Oh, and a crazy-ass ghost might be haunting her kids.
Dream Casting: Amy Adams.

The Dude: Logan Kitridge. As landscaping designer for the successful In the Garden, he's always done things his way, and he can't figure out why his boss Roz wants to mess with that success by hiring a snooty Yankee woman to mess around with his ordered chaos.
The Rub: It's really a damn shame when he starts to fall in love with that snooty Yankee woman, because she's very determined to keep everything in rank and file, and Logan knows that love is anything but obedient and quiet.
Dream Casting: Men in Trees' James Tupper.

Stella: I'm here for the position of manager --

Logan: This woman works with *shudder* computers and actually *gag* files things! Why do I find her so hot?

Stella: Everything else in life is perfectly ordered and categorized, so why do I find a chaotic manbeast like Logan so attractive?

Stella: STAY AWAY FROM MY KIDS, YOU BITCH!

Logan: You were saying?

The Word: This is my first try with the legendary Nora Roberts, she of the Bottomless Backlist, the Fecund Fountain of Fiction, and I have a not-so-legendary confession: after getting about 230 pages in, I just gave up and skimmed.

Yes, I skimmed all the way to the end in about 20 minutes, and found that, after all, I wasn't really missing anything. Sorry, Nora. I don't think I've really skimmed through a book before. I try to give every book my all, but I just couldn't do it with Nora Roberts' Blue Dahlia.

Oddly enough, it wasn't because the book was horrible. It wasn't. It was because it was boring. I can read all the way through a heinous book like The Last Heiress because there's a masochistic part of my brain that's eager to see how much worse it can possibly get. With Blue Dahlia, the storyline was so predictable and the characters so bland that I just flew through to the end and discovered, to my utter lack of surprise, that it turned out just as I thought it would.

But let's go into details, shall we?

In September of 2001, Stella Rothchild loses her husband in a plane crash (oddly enough, not the plane crash I was expecting one to die in during that period of history) and finds herself a single parent to two rambunctious boys. Flash forward two and a half years later, and Stella's moved her family to Tennessee - partly to reconnect the boys with their grandfather and stepgrandmother and partly to win a job as a manager of a gardening centre run by Rosalind Harper.

Stella immediately starts re-arranging things and butts heads with Logan Kitridge, the landscape designer, and the two get into a stereotypical order-vs.-chaos rivalry. Stella bitches about everything that's not colour coded and lined up ruler-straight, and Logan mopes about being forced to use new new-fangled technology like computers and spreadsheets. It's all a little exaggerated and cliched, with Stella quickly labelled as a Control Freak while Logan is the Old-Fashioned Southerner meant to loosen her screws.

As annoyed as I sound with these characters now, they never really progressed beyond the point of mild irritation as I was reading the book. Why? Because the conflict in this story is very low. I guess Nora Roberts was trying to make the story realistic and shy away from some of the plot contrivances that other romances have to raise the tension, but the result was that there was very little tension, at all, in this novel - and there still were a few plot contrivances.

Everything just progresses a little too easily in this book. Stella is swiftly hired by Roz and immediately they're the best of friends and Stella befriends everyone else in short order (barring the occasional snipe at her being a Yankee). Stella has a bitchy mum, but as we meet her once and then never see her again, she doesn't have enough of an impact on the narrative. Logan is divorced, but he discusses it in very vague, bland terms - he has no bitchy ex-wife, he has no heartbreak. The relationship just faded and he felt a bit bad and then he moved back to Tennessee and felt better. As much as angst-ridden heroes can sometimes bother me, Logan needed a bit more angst, because then he might at least have had more depth as a character. I don't even know why Roberts bothered to mention he was divorced if it had so little bearing on how his character turned out.

Even the bickering between Stella and Logan feels tired and half-hearted. There's no witty repartee - it's just the same old "Why do I love your chaotic wildness/Why do I love your tight-assed organizedness" discussions. Nora Roberts' writing style doesn't help. It's certainly not terrible, but it's definitely ... workmanlike. The kind of plain, blunt, here-you-go, telling-instead-of-showing style that I guess makes sense for someone who churns out something like six books a year.

That's the problem I had with this book - nothing about the novel was strictly bad, but nothing was good either. I needed spice, I needed conflict - and the only thing close to a real conflict we get is with the Crazy-Ass Ghost who haunts the house where Roz and Stella live whose Secret Past is easily deduced even though the author believes she needs a whole trilogy to reveal it. People who have read this series - would I be remiss in guessing (scroll for possible spoilers) the ghost is the mistress of Reginald Harper and that her baby boy was stolen from her and is actually Roz's ancester?

The only character who went above bland annoyance for me was Hayley, a pregnant woman who shows up on Roz's doorstep. Again, her past is conflict-free but here it was just unrealistic and became the very plot contrivance I'm sure Nora Roberts was trying to avoid. Hayley's pregnant, nearly broke and on her own - and why? Because she decided to move away from her home town when she found out her babydaddy (who was a friend and a one night stand) was in love with another girl, and she just didn't want to "bother" him with the news. Yes, that's right, because an infant knowing who her father is and a man knowing that he's fathered a child is such a "bother." It's such a ridiculous bullshit excuse, but I held out, thinking Hayley might mature over the novel and think twice about not telling the father of her child, but nope. Her babydaddy is mentioned exactly once and is never brought up again, even when her baby's born.

I'm sorry, but while I was reading this book I needed a better reason than that to understand why a character like Hayley's would make that sort of decision. Even a cliched past like an abusive or uncaring boyfriend would provide an adequate motivation for Hayley's actions, but her bland, I-didn't-want-to-ruin-my-friend's-life excuse makes her look selfish, irresponsible, and shortsighted - which clearly contradicts all the extensive telling Nora Roberts does to impress upon the reader just how smart, capable, and in-love-with-her-child Hayley is supposed to be.

So yeah, I skimmed. And I didn't miss a whole lot. I did argue with myself about skimming through, about not giving the entire book a chance, but I'd managed 230 pages. Frankly, I have a TBR pile of 182 books and Christmas is coming up. Life's too short to waste on mediocre novels.
C+