Review & Reflection: The Princess and the Frog 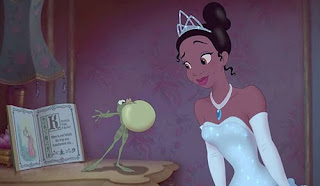 As you may or may not have guessed from reading my earlier (WAY earlier) blog posts, I am a huge Disney fan. I grew up in the decade of the Disney Revival, singing along with Ariel, Belle, and Simba.

As the 90s came to an end, however, Disney started moving away from hand-drawn animation and more into computer animation - creating movies that, for the most part, were either terrible or m'eh.

No more music. No more hand-drawn animation. Thankfully, all that changed thanks to a couple of things: first, Enchanted (a tender but sharp-witted homage/spoof of Disney's 2D animated heyday) kicked royal ass at the box office. The second thing: Disney bought Pixar, and then Pixar's head John Lassiter cleaned house at Disney - basically telling Disney, "See? You own a steakhouse now. No need to keep making dogfood." Essentially: Pixar's here to do computer-animated movies, and we do it well. Go back to doing the animated musicals that people miss and enjoy.

As you can probably bet, I was really excited when they announced The Princess and the Frog. However, watching the trailer I had a few worries:

1) Randy Newman was writing and composing all the songs (yes, I know he did Faust, but lately what's he done?)

2) The hero (Prince Naveen) had a Sidekick Voice. You know, the cheesy overblown accent and "adorable" pseudo-sexual aggression. Really? The male protagonist has that voice? It'd be like a romance with Lumiere, or Pepe LePieux!

But, you know, I'm a slave to the Mouse House, so today I slapped down the money and saw the damn thing. My take? Mixed.

The movie starts with a rather tepid introduction that very obviously hammers home the morals, obstacles, and motivations that will outline the entire film: Tiana, the daughter of a chef and a seamstress, shares her father's dream that one day they'll own a restaurant, barely heeding her parents' warnings that one shouldn't lose sight of one's true priorities in the process of chasing that dream.

The film jumps forward ten years and picks up in tone and energy: Tiana works two jobs, saving up almost enough money to buy that restaurant she and her (now deceased) father dreamed of building. Her friend Charlotte, a wealthy, thoughtless, spoiled, and refreshingly un-evil heiress, tops off Tiana's savings by hiring her to cater their upcoming masquerade ball. The ball's to be held in honour of the arrival of Prince Naveen in New Orleans.

Unbeknownst to either of them, Prince Naveen (fresh from Some Random Country in Europe) is a freeloading, carefree, amorous rake whose royal parents have cut him off thanks to his constant partying. He needs to marry an heiress to make ends meet and thinks Charlotte'll do just fine. However, before he makes it to the ball, he's lured into a trap by a scheming voodoo villain called Dr. Facilier. Dr. Facilier turns poor Naveen into a frog and convinces the Prince's resentful and mistreated servant Lawrence to take his place, all to further his evil plan to conquer New Orleans and feed its souls to the voodoo spirits. Or something.

Meanwhile, back at the ball, as Charlotte dances with Lawrence (transformed into a Naveen doppelganger by Facilier's spell), Tiana learns from her realtors that someone outbid her on the property she's planned to build her restaurant on. The snide realtors comfort her by saying a woman "from her background" wouldn't have been able to handle a busy restaurant anyway. Hope you got that, audience, because that is the only reference to race or racism this movie makes.

The heartbroken Tiana then runs into the froggy Naveen, who mistakes her for a princess. Well versed in fairy-tale logic, Naveen implores Tiana for a kiss, promising to pay for her restaurant as a reward. However (and this is supposed to be the movie's big twist), the liplock ends up changing Tiana into a frog instead. Both protagonists are pissed at the other (Naveen because Tiana's not a princess, and Tiana because Naveen's actually broke), but they must work together in order to reverse the spell. Meanwhile, Dr Facilier sends his shadowy minions to track Naveen down, as it turns out his voodoo magic requires a steady source of the prince's blood in order to fuel the spell that lets Lawrence walk about in Naveen's form.

Let's start with the positive, shall we? Character-wise, the film steers clear of a lot of the worst cliches and manages to add some interesting surprises, chief of which is Prince Naveen - yes, romance fans, we actually have a Disney Prince who is an irresponsible, spoiled rake. Most of the Disney Dudes of the last 20 years have all been either a) upstanding, moral blokes (Shang, Prince Edward, Phoebus, John Smith, Eric) or b) mischievous or bad-tempered, but not overly obsessed with the ladies (Aladdin, Beast). Prince Naveen, however, loves the ladies, and would really rather not settle down with just one if he had the choice. He'd rather tap-dance to jazz music than do anything even resembling work, but he needs matrimony to pay the bills.

From a fairy-tale perspective, it's a character reversal from The Frog Prince - the original story is a reverse-Beauty & the Beast-plot: there, the Frog Prince is a decent bloke cursed thanks to an invitation that got lost in the mail, and it's the beautiful Princess who is the spoiled, pampered beyotch who learns to change her ways.

Thankfully, our Princess, Tiana, is an incredibly likeable and strong female character. In a nice touch for Disney, Tiana is a hard-working, sweat-of-her-brow type who's willing to work herself to the bone to achieve her dream: which isn't wedded bliss, but owning her own business. Her main flaw is that in her single-minded determination to get what she wants, she also misses out on the sweeter, simpler joys in life.

As well, some of the other characters surprised - particularly Lawrence, a comically bumbling servant in the Cogsworth mold who, instead of being a benevolently-downtrodden sidekick, hides a dark streak of resentment against his employer, and his betrayal of Prince Naveen is well-motivated. Charlotte, too, could easily have become an Evil Stepsister, but the movie allows her to be a cheerful and positive character - without sugarcoating the fact that she's spoiled, frivolous, and vain.

As well, as you can tell from my admiration of Tiana, The Princess and the Frog works within a strong feminist framework. Tiana's determination to run her own business isn't what's wrong with her - it's her failure to acknowledge that money and success aren't the only important things in life. Besides - she gets her restaurant in the end!

Interestingly, the whole Prince and Princess aspect of the movie comes off as a shallow concession to the five-year-old tiara-wearing demographic. Tiana doesn't give up her business interests to live in her hubby's castle - instead, they both rush off after their royal wedding to fix up her restaurant. Tiana wears a tiara as she manages her establishment, but that's about it. How refreshing!

Now, the bad - first off, the songs are completely forgettable. I can somewhat understand the choice of Randy Newman for the soundtrack - the setting is 1920s New Orleans and thus jazz-flavoured music would be preferable to the showtunes of yore. However, Newman's music, while not unpleasant, is little more than jazzy background noise - all the songs are a little too similar in tone, and the lyrics were bland and unimaginative. I came out of that theatre with nothing to hum, and no lyrics worth repeating. Take it from me: I watched The Little Mermaid once when I was three and had the whole soundtrack memorized. I really wished Alan Menken had done the music for this.

The second issue I wanted to discuss about The Princess and the Frog was the issue of race. Why shouldn't I bring it up? The movie sure doesn't. I found that odd - Disney's marketing turned Tiana's race into such a Big Fucking Deal ("our first African American Princess!"), but the movie completely ignores the issue of race, except for a single line - the one made by the realtors that a woman "of [Tiana's] background" wouldn't be able to handle a busy restaurant. When I first heard that line, I thought it was vague, but understood that in a kids movie, the issue of race needed to be handled gently.

But except for this one line, race is never brought up again - by anyone. None of the black characters mention race or treat people differently because of race, and neither do the white characters. I suppose the setting helps establish the difference, but it relies more on socio-economic class differences - for instance, the scene where Tiana goes home from her rich friend Charlotte's house on the trolley. The fancy houses of Charlotte's (presumably white) neighbours whiz by the windows, eventually replaced by the tiny houses in Tiana's neighbourhood. However, this would be the same in any rich-girl-poor-girl story.

The film's decision to turn race into a complete nonissue rang false, especially considering the real-life historical setting (1920s New Orleans) and Tiana's romantic interest, Naveen (who is white). Ironically, the one reference to race compromised my belief in the story - if the rest of the movie was meant to be a revisionist history where race isn't an issue, why bring up the issue of race even once?

I mean, Naveen mistakes Tiana for a princess - why? Just because she's wearing a fancy dress? Maybe the balcony was poorly-lit so he didn't notice. Also, Naveen, the Crown Prince of a white European country in the 1920s, marries an African American woman, and somehow his royal parents are fucking thrilled. Riiiiight. I like to imagine the unspoken reason why Naveen ends the movie working in Tiana's restaurant instead of going off to Maldonia to do, like, Princely stuff is because his parents have permanently disinherited him in a rage.

It might even have been funny to have race be an issue between Tiana and Naveen - since they spend the majority of the movie as frogs, and actually fall in love as frogs, their discovery that race is irrelevant to love once they're both green would have been pretty cool.

I also might have tolerated the ending more if they'd chosen a fictional, rather than an historical setting. To choose to put your story about a black woman falling in love with a white man in the American South, particularly the early 20th-century American South before the Civil Rights movement, and then completely ignore the issue of race beyond a vague remark, boggles the mind.

Beyond that, however, the movie wasn't terrible. The visuals were lovely and the characters well-drawn, but I personally don't consider it a Disney Classic.
B
Posted by AnimeJune at Friday, December 18, 2009