"These Old Shades," by Georgette Heyer 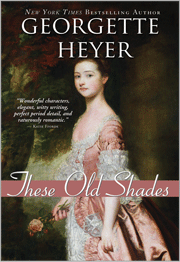 The Chick: Leonie de Saint-Vire, a.k.a. "Leonie Bonnard," a.k.a. "Leon." After the handsome Duke of Avon rescues her off the streets, she remains passionately devoted to him.
The Rub: She's a mere peasant girl - who is she to aspire to the affections of a peer? However, she suspects Avon might not be telling her everything...
Dream Casting: Claire Danes.

The Dude: Justin Alistair, Duke of Avon. When he discovers an urchin on the streets who bears a remarkable resemblance to his worst enemy, he believes he just might have found the key to his revenge.
The Rub: "Leon" cleans up surprisingly well.
Dream Casting: Eric Bana.

The Plot:
"Leon": Au secours! Help!
Justin: One diamond for the urchin, please!

Justin: Try this dress on, will you?

Justin's Friends: What the EFF is going on?

Justin: All in good time.

Justin's Friends: What a tragedy!

Rupert: Um, aren't you in love with her?

Justin: Huh...I suppose I am. How quaint.

Justin: Shall we wed, Leonie?

Leonie: REALLY? OMG! THIS IS THE HAPPIEST MOMENT OF MY LIFE!

The Word: Before anything else, I would like to thank the lovely folks at Sourcebooks, who provided me with this edition of These Old Shades. It has a very lovely cover - you'd think I was reading LIT-ra-chur instead of my regular degrading feminine smut! Huzzah!

Ahem. On to the review: There's a reason I don't read reviews of books that are already on my TBR. I know I'm going to read them anyway, so I don't want the pressure of another person's opinion to affect how I read them.

I also don't like reading reviews of books that I've read but haven't reviewed yet - for the same reason. While updating my reading status on the Visual Bookshelf application on Facebook, I saw the blurb that These Old Shades was essentially the book that made Georgette Heyer's career and inside, I went, "Ooooooooh crap." Why?

Because I didn't really care for These Old Shades.

Oh, the beginning is interesting enough. Justin Alistair, the cold-as-ice Duke of Avon, is nearly tackled by an urchin fleeing from a beating. Thanks to some emotion to which the we, the readers, are not made privy, he buys the urchin off of his abusive brother and decides to make him his page. Leon, the urchin, is gushingly grateful, and pledges eternal loyalty.

Justin's nicer friend Hugh is a bit appalled to discover the debauched duke has adopted a beautiful and innocent red-headed boy, and demands an explanation. While Justin initially claims a whim inspired him to buy Leon, and that the novelty of Leon's fervent hero-worship convinced the duke to keep him, the wheels in Justin's head are already turning towards a much deeper purpose.

Leon, it seems, bears a striking resemblance to the Comte de Saint-Vire - the Duke's bitterest enemy. Years ago, Justin fell in love with the Comte's sister but his marriage proposal was denied by the arrogant Comte, who threatened to horsewhip him from his presence. Ever since, Justin has planned a slow meticulous revenge.

The Saint-Vires are all known for being red-headed, as well as notorious for their fiery tempers. However, the Comte's only child, his son Henri, is a strangely dark, placid, agriculturally-inclined individual. With a bit of investigating, Justin discovers Leon and Henri were born around the same time at around the same place - he also discovers Leon is really Leonie, a girl forced to pose as a boy in order to slave in her cruel brother's tavern. Justin eventually comes to the conclusion that Leonie is the legitimate daughter of the Comte - switched at birth with a peasant boy so that the Comte could claim an heir and keep his title out of the hands of his despised brother Armand (who's actually quite a nice chap).

Once Justin figures this out, he promotes Leonie from page to ward, and packs her off to his sister Fanny to be re-girl-ified. His ultimate plan is to turn this red-headed tomboy into a cultured lady, the better to help the Comte de Saint-Vire lose his everlovin' shit when his dirty little ginger secret starts dancing and flirting beneath his very nose.

My friend Janet Webb from Twitter warned me that These Old Shades was stirring up controversy this year, and I can see where that could come from. First of all, there is a twenty-year age gap between Justin (40) and Leonie (20). There's also the pseudo-incestuousness of the relationship - Justin calls Leonie "my infant." And one can't forget the rather large fact that Leonie is balls-out batshit insane for Justin to the point where she'll go into blade-wielding-berserker-mode and try to stab people who warn her about the Duke of Avon's nasty ways.

These Old Shades works as literary fiction - the historical setting and style of writing are convincing enough that I found myself excusing things like the age gap and the hero-worship the same way I excuse the politically-incorrect contemporary attitudes expressed in actual 18th-century literature.

These Old Shades also works as a character study of Leonie. Okay, so she's perpetually one jello-shot away from carving Justin's name on her forehead, but I enjoyed how she reacted to her changing circumstances. Heyer manages the very delicate task of making Leonie worshipful of Justin without being submissive. Leonie is a very fluid character, in a sense - she's able to adapt to what people expect of her without really changing who she is. While at first she wails about being made to wear hoops and petticoats instead of breeches, she doesn't spend the entire novel finding excuses to wear breeches. Eventually she discovers she rather likes wearing skirts - but she still adds her own unique touches to what she wears and never ceases to voice her opinion.

What ultimately kept me from connecting with this romance, however, was Justin. To me, he's a non-character. One of the elements of Georgette Heyer's writing style is the very, very sparing use of internalizing. We very rarely get a view inside the characters' heads, and essentially have to rely solely on what they do and say externally. Leonie is a very open character - in fact, most of the novel's characters say precisely what they think - so I never had a problem connecting her actions and words to her thoughts and motivations. Justin, however, remains a riddle throughout the book, and not in the good way.

Justin never really changes or moves forward as a character. Every single thing he says is drenched in bored, affected sarcasm, which conveys exactly nothing about what he's thinking. He doesn't emotionally engage with any of the secondary characters and all of his plans are performed alone. I think we're supposed to get the idea that he's some sort of brilliant mastermind but I really objected to how he continued to leave every single character in the dark about what he ultimately plans to do. His BFF Hugh, his sister Fanny, his brother Rupert - they're all so much furniture to Justin.

Because of this, I honestly didn't buy the romance. At all. Justin's always foisting Leonie off on other people and then when they meet again, Justin communicates with the same neutral cynicism. Not only does this make Justin unromantic, but it makes him boring. Nothing really gets a bigger reaction out of him then, "his eyes became as hard as agates." Nothing affects him, nothing changes him, he confides in no one, he expresses no emotion - can someone please explain to me why he's the freakin' main character? Or why he's supposed to be so darn interesting? I mean, there's mysterious, and then there's just absent. The whole point of having hidden depths is that eventually we get to plumb those depths!

I think the part of this novel that clinched this for me was the end - y'know, when Justin's ultimate Master Plan comes to fruition and he runs off to tell Leonie and reveal his feelings. Over the course of one scene, he shows more emotion than the entire novel - he clutches his snuff-box very tightly, his tone becomes harsh, etc. This is all stuff that should be have been shown way, way earlier, in a classic case of too little, too late. I never got the impression that Justin was emotionally invested in anything other than revenge - even when Leonie runs away, he just coolly thinks, "Huh. Well, at least she's out of the way. I'll pick her up later after I'm done."

I really wish I could have liked These Old Shades. I adored Devil's Cub (in which our protagonist is Justin's son Dominic), because I got the feeling that both hero and heroine were emotionally invested in the relationship. Mary meant enough to Dominic to get him to change how he treated other people. Justin sets out to do exactly one thing - and, regardless of Leonie, his friends, or his relatives - he goes out and does it, precisely as he planned it. Um ... yay? So Leonie means what to him, exactly? Okay, okay, there is some explanation that his motives for his revenge have changed (instead of punishing Saint-Vire for the botched marriage proposal, he's now punishing Saint-Vire for condemning his own daughter to abuse and poverty), but he still remains resolutely alone - involving no one in his plans, asking no one for help, and certainly not telling Leonie a damn thing about her parentage, his plans, or his vengeance.

I liked the historical detail. I liked the setting. I admired Heyer's grasp of the language and expressions of 18th century England and France. However, the main character of the novel had all the liveliness and humanity of a frozen salmon filet, which made much of the story drearily boring.
B-