"The Hunger Games," by Suzanne Collins 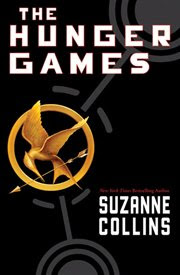 Our Protagonist: Katniss Everdeen. A hardbitten teenage
survivor of impoverished District Twelve, she's gotten by with few resources and fewer emotional entanglements.
The Rub: When her one emotional entanglement (her younger sister Prim) is endangered by the brutal custom of the Hunger Games, Katniss takes her place in the fight-to-the-death tournament.

Gale: Katniss' BFF and Possible Love Interest #1. A fellow hunter and scavenger like herself. Promises to look after Katniss' family while Katniss is gone.

Peeta: District 12's other tribute for the Hunger Games, and Possible Love Interest #2. A lowly baker who's never had to struggle for survival the way Katniss has, he still has a few canny tricks up his sleeve.

Haymitch: Katniss and Peeta's mentor for the Hunger Games, a previous Hunger Games champion who's quite capable and helpful - when he's sober. Which isn't often.

Cato: A ferociously violent boy from a wealthy district who is the odds-on favourite to win the Games.

1 Fake Relationship that Evolves Into More (?)

The Word: Katniss Everdeen is a survivor. An inhabitant of the impoverished District 12, her days are consumed by endless hours of searching, hunting, scavenging, trading, and stealing to make sure her family has food on the table. She wastes nothing - not time, not food, and certainly not emotion. Her father is dead, and her mother can't be trusted - at least in Katniss' eyes.

There are only two people in the world she spares feelings for - her innocent kid sister, Prim; and Gale, her friend and partner in food acquisition. Nothing and nobody else matters - not the privileged (few) rich folk, not the other eleven districts, and not the Capital.

Until the annual Hunger Games roll around - a barbaric tradition where two teenage "tributes" are selected from each district to participate in a brutal fight-to-the-death tournament for the nation's entertainment. The Games' lone winner goes home set for life - and the winner's District is showered with wealth and support for an entire year. The other twenty-three kids come home in boxes.

Katniss worries that her name might be selected (the tributes are chosen by drawing names, but teenagers who put in their names more than once are rewarded with extra food), but something far worse happens - sweet 12-year-old Prim's name is drawn instead, so Katniss volunteers to go in her place. The other tribute is Peeta, the son of the local baker whom Katniss recognizes but barely knows.

Now, at least for the first few chapters, The Hunger Games sounds a lot like the Japanese manga/film series Battle Royale, since they both involve corrupt societies forcing teenagers to kill each other until only one remains. But The Hunger Games goes further than that, showing us the media and societal aspect of the Games themselves.

Once Katniss and Peeta are chosen and taken to the Capital, they are given over to a professional team that involves their "mentor" Haymitch (a canny drunkard who is the last person from District 12 to win the Hunger Games), a prissie PR expert named Effie Trinket, and a stylist named Cinna. While Katniss and Peeta also receive some weapons training, they also get training in attitude, personality, and how to perform well in interviews. Because the Hunger Games, it seems, aren't just for the tributes - they're also the nation's entertainment. Enormous amounts of money change hands during the Games as people bet and place odds, and wealthy people can even "sponsor" a tribute who stands out from the pack by sending them hints and even supplies during the Games themselves.

It's the social aspect of the Hunger Games that fascinated me the most while reading this book - the fact that even once the Games have started and Katniss has to fight for her life, she still has to consider the millions of people who are watching her every move from hidden cameras. The more audience sympathy she has, the more sponsors she can get, and the more secret advantages she'll be given. However, if she appears too rebellious or starts openly questioning the Powers That Be, those same Powers can manipulate the Games to make them that much harder for her.

This plays especially well into the complicated relationship she develops with Peeta, her fellow tribute. At the beginning of the book, Peeta surprises them all by declaring to the media that he and Katniss are in a romantic relationship. The "tragic romance" angle gains them so much audience interest that Katniss plays along with the ruse in order to survive - even as she increasingly starts to question how much of it Peeta's actually faking.

Katniss is the central character of The Hunger Games and she doesn't disappoint. She's a girl who has had to fight for all the she has and she refuses to deal with deadweight - such as her mother, whom she rejected after the woman's depression nearly caused their family to starve. She's unaccustomed to trifling with people who can't keep up with her, so having to slow down and help Peeta (in order to support their cover story of being tragic lovers) goes against all of her stronger (if not necessarily better) instincts. Their interactions are fascinating, and I look forward to reading how they continue their relationship (along with Gale) in the following books.

As a book, The Hunger Games is excellently paced. The language is precise while still evocative. The worldbuilding - well, that's a shakier subject. The novel's focus is more on the story and less on where it happens, so a lot of the sci-fi, the technology, the history, and the dystopian aspects of the world itself seem a bit vague or convenient. But maybe I will learn more when I read the following books. As it is, The Hunger Games was thought provoking and entertaining with a strong female protagonist. Thumbs up!
A-
Posted by AnimeJune at Monday, July 25, 2011