"Talk of the Town," by Karen Hawkins 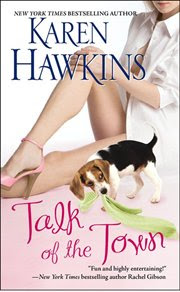 The Chick: Roxie Treymayne. Newly divorced from her cheating husband, she's all set to change her life, change her hair, and become the bad girl she never got to be.
The Rub: Until her mother suffers a heart attack, and she now has to drag herself (and her new hair, piercing, and tramp stamp) back to her hometown of Glory, North Carolina, where she was the perfectly-perfect Prom Queen.
Dream Casting: Rebecca Romijn.

The Dude: Nick Sheppard. Formerly the town troublemaker, he left
Glory to become a straight-arrow cop. Now he's back in Glory as the sheriff, just in time to see his first love, Roxie, roll back into town with a whole new look and a taste for trouble he no longer shares.
The Rub: He left his big-city cop job after his supervisor let a pretty young thing lead him into police corruption, so he's determined that no woman will let him stray from the straight and narrow.
Dream Casting: Harry Connick Jr.

Roxie: Hey now that my husband's run off with a dude I'm going to be all hawt and free-wheeling and tattooed and stuff! I'm going to see the world!

Nick: Hey now that I'm a sheriff after having to leave the big city when I ratted out my cop buddies, I'm going to have to stay completely clear of troublesome women in order to maintain my integrity!

Roxie: Hey y'all! I got a tattoo! Close to my BUTT!

Random Old People: Let's solve crimes! And be nosy busybodies and make snap judgements! We're old and sick and going to die soon, so that makes it funny and okay!

Roxie and Nick: *have sex*

Roxie: Hey, remember when we were hot teenagers whose love burned out really fast for no reason?

Nick: I only heard the first half of that sentence.

1 Comic Relief Maid Who Is In Reality Incredibly Annoying

The Plot: Roxie Treymayne has had it up to here with her charmed life. After years of being the perfect daughter, student, Prom Queen and wife, Roxie finds herself set adrift (albeit with a huge monetary settlement) after she discovers her husband in bed with another man (a development that is played, rather uncomfortably, for laughs).

So Roxie decides to HELL with being the Good Girl. She dyes her hair blond, changes her wardrobe, gets herself pierced and tattooed and is all set to jet off to Venice or Paris to live the high life she never allowed herself to - just in time for her overbearing mother to have a heart attack, necessitating Roxie's return to her hometown of Glory, North Carolina, to help care for her.

On the way into town, she runs into none other than Nick Sheppard - the former town bad boy, whose teenage fling with her was the only rebellious move Roxie'd ever made under her mother's roof. He's cleaned up into the town sheriff, and he's more than a little surprised by Roxie's new attitude on life.

Their attraction flares back to life almost instantly, now with the added spice of having their moral standpoints reversed - now Nick is on the straight and narrow while Roxie is determined to cause trouble. However, neither is willing to renew their relationship. Roxie wants nothing more than to settle her mother's affairs (one of which involves babysitting a senior citizen's club and their birdbrained attempts to solve a mysterious death) as quickly as possible so she can resume her plan to travel the world and have an adventure.

Meanwhile Nick's viewpoint on women has been tarnished by his past as a big-city cop who was forced to rat out a beloved mentor who turned corrupt thanks to the wiles of a Troublemaking Woman, and he's afraid that succumbing to his renewed lust for Roxie will lead him down a similar path.

First of all, for this book, I liked the protagonists and I really enjoyed the idea of the novel - that of the Bad Boy and Good Girl who reunite years later with their standpoints reversed. While I found the hyuk-hyuk Roxie's Husband Loves a Transvestite! plotline trite, unnecessary, offensive, and even a little nonsensical (Roxie feels she wasn't feminine enough for her husband - um, he's gay, femininity was the problem), I loved her new attitude and how she moved on from it. Similarly Nick Sheppard manages the toe the fine line between Distrusting Himself Around Women and Distrusting Women, so his romantic reservations come across as a little paranoid but not misogynist.

I also enjoyed the mystery element - the bad guy was not who I thought it would be, surprise, surprise.

But at the same time, I wasn't totally engaged. The two protagonists are generally reasonable but they also aren't very interesting beyond their initial problems. As well, the humour is pretty hit or miss. Madcap humour is especially difficult - there is a thin line between crazy-hilarious and crazy-annoying, and I felt most of the characters and their depictions fell into the latter category, particularly Roxie's housekeeper Tundy who seems to be there mainly to spurt anecdotes and wacky words of wisdom.

I'm also not a fan of mystery romances where the heroine, who is not in law enforcement and has no law enforcement training, gets butthurt when the cop hero won't let her ride along on a case or handle or keep crucial evidence. I'm sorry, but the reason he won't let you do that is because it's the law, not because he doesn't trust you. Calm your tits.

As it is, Talk of the Town was a pleasant but not very memorable read.
B-
Posted by AnimeJune at Friday, July 22, 2011