"The American Heiress," by Daisy Goodwin 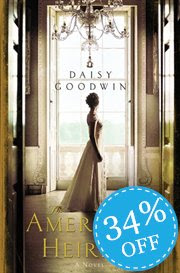 The Protagonist: Cora Cash. A spirited and insanely wealthy heiress to a flour fortune, despite her mother's machinations and the gossips from two nations, she nevertheless manages to marry for love.
The Rub: ... or does she? As she wades deeper into British society as a newly-minted Duchess, she discovers secrets and lies surrounding her aristocratic husband and his circle of friends.

Ivo, the Duke of Maltravers: An impoverished aristocrat who inherited the title when his beloved brother suddenly died, he guiltily devotes himself to his estates and holdings - longing to bring them up to the standard to which they used to exist. And this fetching, lovely, and besotted flour heiress could very well be the answer to all of his life's problems.

Teddy Van Der Leyden: When Cora wanted to elope with him, he held back, self-conscious about how her vast wealth would affect their relationship. Now that she's married to a Duke, he's kicking himself for his hesitation.

The Double Duchess: Ivo's mother, who scandalized society by marrying the Duke of Buckingham right after her previous husband, the Duke of Maltravers, died. Likes sex. Dislikes American daughters-in-law.

Mrs. Nancy Cash: Cora's social-climbing mother. Suffers from severe burns on the right side of her face from an electrical-dress accident. Yes, you read that correctly.

Lady Charlotte Beauchamp: Cora's "friend" and Ivo's former mistress who is willing to do just about anything to get back into Ivo's good graces - if she isn't already.

The Word: When I first picked up this novel, I was expecting a good story, some interesting history, and a heaping spoonful of well-written scandal. What I got was, more or less, an historical romance novel.

Not that there's anything wrong with that - as you can clearly see by the content of my blog! I love romance, historical romance especially. It's just that when I pick up a novel marked as fiction, my expectations are slightly different, story-wise. I expected a different sort of narrative focus, and while there is some of that, it's mostly a highly romantic tale - which makes me wonder, why wasn't this published and marketed as a romance?

A lot of times, these sorts of situations make me think of the Romance Novel Catch 22 - There are no good romance novels because when a novel is truly "good," it's no longer marketed as a romance - because there are no good romance novels. That's why my local Chapters considers Jennifer Crusie's novels to be "Women's Fiction," which is ridiculous.

Anyway, American Heiress has a basic concept quite familiar to readers of historical romance (Lisa Kleypas' books in particular) - Cora Cash is a fashionable, spoilt, free-spirited and unbelievably wealthy heiress who is taken abroad by her mother in order to land an impoverished British aristocrat to marry, essentially "purchasing" his title and the cachet that comes with it.

Cora agrees to the scheme mainly out of guilt. Back in New York, she thought she was in love with Teddy Van Der Leyden, the scion of a less-wealthy but incredibly old-school New York family, but when her mother's head literally caught fire at the sight of them kissing (I'm not kidding, you have to read it to believe it), Cora assuages her guilt by crossing the Atlantic.

And, entirely by accident, she succeeds at her plan - by falling off her horse in a wood belonging to Ivo, Duke of Maltravers, a handsome, duty-bound aristocrat with a mountain of debts and a crumbling estate. After a brief, sudden courtship, they are betrothed, and after a money-drenched spectacle of a wedding, Cora finds that adjusting to traditional English life is not as simple as she assumed.

Again, romance readers will know exactly where this is going. Culture shocks abound - Cora realizes she cannot buy tradition and history, something her husband and his friends value highly. Ivo has a Dark Past that would do any Alpha Romance Hero proud - he's got a Bitchy Whore Mother, a Bitchy Whore Ex-Mistress, and a Mysteriously-Dead-In-An-Accident Older Brother. And nobody's really sure, least of all Cora, if Ivo's Bitchy Whore Ex-Mistress is really an Ex at all.

It's a delightful book if you love opulent detail, high-society shenanigans, and ssssecretsss. Since this book is almost-but-not-quite a romance, the story has the liberty to explore a larger circle of characters instead of entirely focusing on the main two. The points of view gracefully bounce around most of the main characters, allowing the reader a peek into everyone's particular story. There are lots of secrets and angst, so believe me, even though the book begins with Cora paying her maid $75 to make out with her and a woman in a dress made out of lightbulbs spontaneously bursting into flame, it's not all downhill from there.

It's also written quite well, with a reliable balance between wordplay, detail and story-telling. There are some historically-questionable moments (like death duties and the fact that Bertha somehow believes that interracial marriages would be tolerated in 1890s London) but oh! The descriptions of clothes! The high society parties! The barely-veiled bitchy one-liners!

However, if you are a romance reader and read this book with the same expectations, you are going to be disappointed, because the character who receives the least explanation and development is Ivo. True, he is the novel's central mystery, as Cora has to wade through suspicions and self-doubt to discover whether she was married for love or money. However, their relationship isn't particularly well handled, his character is often crude and inconsistent, and the conclusion to their story was surprisingly, unbelievably abrupt, with little payoff. Just for all the hoity-toity "romance is trash" types - a romance novel would typically have handled the ending way more gracefully than this book did.

Nevertheless, this was a fun book. Not necessarily realistic and not necessarily consistent, it was still well-paced, well-written, and just plain entertaining (barring the sudden conclusion).B+
Posted by AnimeJune at Wednesday, October 19, 2011