"A Summer to Remember," by Mary Balogh 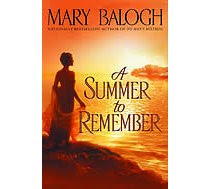 The Chick: Lauren Edgeworth. After being humiliatingly abandoned at the altar, this well-bred lady has no intention of entering into marriage ever again.
The Rub: While marriage is out of the question, a bogus engagement to a scoundrel is perfect - and it keeps her well-meaning relatives from meddling.
Dream Casting: Keira Knightley.

The Dude: Christopher "Kit" Butler, Viscount Ravensberg. What's the best way to avoid an unwanted engagement? Fake another engagement - to a different woman.
The Rub: His relationship with Lauren may be false, but his feelings for her are increasingly real. But how will he convince her that the best ending to a fake engagement is a real wedding?
Dream Casting: Hugh Dancy.

Well-Meaning Relatives: Lauren, you should get married again.

Kit's Drunken Friends: Bet you 50 bucks you can't marry Lauren Edgeworth by the end of June!

Kit: *shamed* For pretendsies, then?

Lauren: Let me think about it -

Lauren: NO, THE SEQUEL: NO HARDER.

Kit: Let's have awesome Pity Sex to get me over my Guilt Issues!

Lauren: What is wrong with you?

Freyja Bedwyn: Hey y'all, I'm here to provide romantic tension and also to show off what a fabulous bitch I am. *BITCH GLARE*

Kit: Awesome! Now we can get married now!

The Word: We first met Lauren in One Night For Love, when her world was shattered into a million emotionally unstable pieces when her wedding to the Earl of Kilbourne collapsed when he discovered his previous, thought-dead wife Lily was very much alive. She spent most of that novel wandering around looking ghastly and making everyone feel guilty, but in A Summer to Remember she's regained her poise and is trying to recover and move on.

However, her well-meaning relatives keep trying to match her with suitable gentlemen, and everyone is so kind and pitying towards the poor, rejected spinster, that Lauren is slowly going mad all over again.

Salvation unexpectedly arrives in the form of Kit Butler, Viscount Ravensberg. He's also having matchmaking problems, you see. Formerly the black sheep of the family until an unfortunate death made him the heir, he's discovered his father intends to announce Kit's engagement to the sister of one of their neighbours. Stung by his overbearing father's controlling behaviour but aware of his duty, Kit decides the more mature and responsible way to say, "suck it, Dad!" is to marry someone else before his dad can make anything official.

But because he is still a bit of an irrepressible cad, Kit allows his drunken friends to make a wager out of it. Kit needs a respectable bride, and there's no one more rigidly proper in Society than Lauren Edgeworth - but surely she's far too high in the instep to consider someone with such a rakish reputation.

Kit sets about seducing Lauren Edgeworth with enthusiasm, and he's unwittingly aided by Lauren's friends who are so stuffily opposed to his presence that Lauren finds herself acceding to his outlandish overtures just to spite them. However, to this reader's very great relief, the whole "seduction as wager" plotline quickly dissolves before the end of the first act when a) Kit realizes he likes Lauren in spite of himself and b) Lauren sees right through Kit's facade.

However, given a brief taste of flirtation and romance, Lauren agrees to the arrangement of a false betrothal. While she's accepted her future as one of quiet, staid spinsterhood, she will pretend to be Kit's fiancee to fend off his father's matchmaking antics if, in return, he will provide her with one adventurous, romantic summer before they both part ways.

Of course, part of the arrangement involves Lauren travelling with Kit to his family estate in order to celebrate the birthday of his grandmother, and that's where she discovers that the sunny, charming Kit hides quite a wealth of dark family history beneath his cheerful smile, beginning with a younger brother who followed Kit into the war but returned a maimed cripple, and continuing with the coldly resentful family members of Kit's intended fiancee, Freyja Bedwyn (yes, those Bedwyns). Freyja, it turns out, was once the love of Kit's young life before she spurned him, and she is definitely not pleased to find their positions reversed, and in favour of a milk-and-water-miss like Lauren, no less.

Despite all this history and drama, Mary Balogh never resorts to histrionics. This story is a slow, steady, quiet exploration of English scenery and character development, as most of Balogh's novels are. And, since Lauren and Kit are fascinating characters, generally I enjoyed it - although, and this may just have been due to the mood I was in while reading it, I found myself getting a little impatient with the pacing three-quarters through.

Thanks to life dealing her a Royal Flush of Abandonment Issues (from her parents, her father's family, and eventually the Earl of Kilbourne), Lauren's lived her life striving for approval from others, never putting so much as a toe out of line, desperate to appear perfect and poised and worthy of love and security. At the beginning of the novel, it's hard not to pity her, having endured rejection after rejection.

Her dependence on propriety is so ingrained that it takes quite a bit of effort on Kit's part to shake a few curls loose, and convince her to live for herself. Balogh uses a nice bit of word play on the difference between "lady" and "woman" in regards to Lauren's behaviour - she's spent so much time being the perfect lady that she's had no time to explore the kind of woman she really is. And once she does - again, to Balogh's credit - she doesn't immediately transform into the Secret Hoyden Who Loves Wearing Pants. She's actually pretty normal, just a lot happier.

It's also interesting to compare Lauren to Freyja - as the novel frequently and explicitly does. Freyja does embody the typical wallpaper heroine who Cares Nothing For Society's Strictures (at least in this novel), and these types of heroines regularly do triumph over the proper and well-bred misses - and Freyja would have done just that if this novel had been written by, say, Judith McNaught. Thankfully, Mary Balogh's got this - and it's compelling stuff to watch just how Kit (and Lauren) discover Freyja wouldn't be a perfect match for Kit - this novel is about how Kit grows up and moves on from his reckless past, while Freyja clearly hasn't.

As per the usual, Mary Balogh crafts a solid, enjoyably romantic novel that looks upon stock romance characters from a different perspective.
B+
Posted by AnimeJune at Saturday, October 08, 2011