"The Broken Kingdoms," by N.K. Jemisin 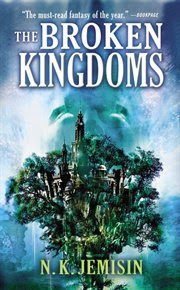 The Protagonist: Oree Shoth. A blind artist with a powerful secret - she can see magic.
The Rub: Her ability to see magic - along with a secret untapped potential locked in her ability to paint - is dragged into the limelight when she rescues and harbours a mysterious man with a very dangerous past.

Shiny: A strange man Oree rescues from a muckbin. He glows at sunrise, and has the power to come back to life after dying - something he does with disturbing frequency. Also, the godlings in the city don't like him one bit.

Madding: Godling of Obligation, and Oree's ex-boyfriend. They share a romantic past rife with awkwardness.

Lil: Godling of Hunger - nasty, crazy, wants to eat you, but occasionally useful in dangerous situations.

Hado: The Master of Initiates for the New Lights, a dangerous heretical cult with eyes on Oree and her magical abilities, but he's hiding a secret card up his sleeve

Dateh: The leader of the New Lights - wants to use Oree's power to restore the world to the monotheistic dictatorship it used to be.

The Word: WARNING - THIS REVIEW WILL CONTAIN MAJOR SPOILERS FOR THE PREVIOUS BOOK, THE HUNDRED THOUSAND KINGDOMS. Please do read that book, because it is awesome. But this review will be spoilery. You have been warned.
So in the first book of N.K. Jemisin's fantasy trilogy, The Hundred Thousand Kingdoms, the author established a world that was formerly ruled by three gods - Itempas (Light/Order/Stasis), Nahadoth (Darkness/Chaos/Progress) and Enefa (Twilight/Balance). However, war erupted among the three, with Itempas killing Enefa and subjecting Nahadoth and their gaggle of godly children (known as godlings) to imprisonment and slavery for two thousand years. During that time, the Arameri (Itempas' chosen people) conquered the rest of the world and enforced the monotheistic worship of Order and Light, and if they met any resistance, well, those enslaved gods and godlings made pretty good weapons of mass destruction.

The heroine of The Hundred Thousand Kingdoms, however, managed to break the gods' bondage, releasing Nahadoth and all the godlings, fracturing the Arameri's stranglehold on the world, and devising a special punishment for Itempas.

On the day that happens, in a little village in a far away country, a blind girl named Oree Shoth discovers she has the ability to see magic - but nothing else. Inspired to abandon her backwater life and search for adventure, she moves to Shadow, the unique and colourful city that built itself around the roots of the World Tree that sprang up at the end of the last book.

Ten years later, the world is a very changed place, at least in Shadow. Itempas' dominion has been broken, and an unpredictable and lively new population of godlings walk the city, gathering new followers and pilgrims. Oree now works as a street artist, selling trinkets and souvenirs to Shadow's now-thriving tourist industry. Thanks to the new proliferation of magic and magical beings, she can see certain things, and it gives her a bit of an advantage over people who think she's completely blind.

Things get complicated when she discovers a dying man in her muckbin and takes him in. He dies several times over the course of his stay, coming back to life shortly thereafter, but otherwise he's as mortal as any man. On top of that, someone has discovered how to murder godlings, and a now-free Nahadoth threatens to obliterate the entire city of Shadow and everyone in it if the killer isn't brought to justice.

At its most basic, unadorned level, The Broken Kingdoms has a similar foundation to the previous novel - the story revolves around an underestimated, whip-smart woman of colour who finds her fate bound (very much against her will and better judgement) to a god who's fallen from grace. But the similarities end there. This novel does a great job of both creating its own story and examining its own themes while building on those established before.

The previous book showed how shallow and colourless a society can be when it abandons chaos and balance and focuses solely on order and light. This is contrasted by the vibrant, yet unpredictable and violent settings shown in this novel, which also examines how religious politics can exist in a world in which the gods are multiple and very present. There were quite a few darkly funny scenes where a god in disguise is forced to listen to the nonsensical blather his followers preach to excuse their heinous behaviour.

But, at the same time, the novel also examines what separates gods from humans. Just as she did in the first novel in this series, N.K. Jemisin nails the characterization of her immortal characters, drawing on myths and folklore. They can be capricious, jealous, vengeful, delighted - yet they have a billion years of experience and layers and ambiguity that render them too complex to define by human standards. Mild Spoilers --- I particularly enjoyed the portrayal of Itempas, especially how he has to deal with the limitations of mortality and just how badly his celestial mistakes have caught up with him. Yes. This is "his" book the way Hundred Thousand was "Nahadoth's" book. Even though BOTH books are ACTUALLY about the two bad-ass women who put up with these idiots.

Simply put, The Broken Kingdoms works on all levels. It's a fantastic book on its own (and could even be read as a standalone, although the first book is too good to recommend doing that), it's an excellent follow-up to the first book, and it provides a wealth of new material and directions to go in for the third novel, Kingdom of Gods (which apparently centers around child-God Sieh, a.k.a. He Who Pulls The Cute Adorable Face While He Kicks You To Death).
A.
Posted by AnimeJune at Saturday, January 21, 2012