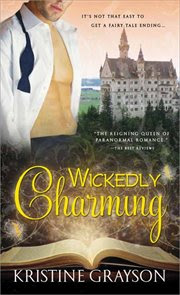 The Chick: Melvina, a.k.a. "Mellie." Unfairly lambasted by the Grimm brothers and popular fiction in general as the Evil Stepmother to Snow White, she's made it her life's work to reveal the truth about how horrible fairy tales really are
The Rub: Trouble is, nobody listens to her because she's loud and annoying and ignorant.
Dream Casting: Lindsay Price.
The Dude: Prince Charming. Cinderella dumped him, his father walks all over him, he gave up custody of his daughters, and he's balding and paunchy. Happily ever after hasn't really happened to him yet.
The Rub: He really, really likes this beautiful stepmother, but can he learn to love again with a glass slipper lodged in his scrotum?
Dream Casting: Adrian Pasdar.

Prince Charming: I find your complete lack of restraint, logic and intelligence so gosh darn pretty!

Mellie: OMG YOU'RE SO HOT, I IMMEDIATELY HATE YOU BECAUSE YOUR LIFE IS BETTER THAN MINE, ARGH ARGH LIFE IS UNFAIR, CRUEL FATE!

Prince Charming: Your constant use of capslock is so gosh darn pretty! You should write a book about your problems!

Mellie: WELL, OKAY, THAT'S A GREAT IDEA. EXCEPT - DO PEOPLE READ ACTUAL READ BOOKS? FOR FUN? EVEN IF THEIR STUPID TEACHERS AREN'T MAKING THEM DO IT FOR SCHOOL?

Mellie: OMG WHY HAVE YOU BEEN AVOIDING ME FOR MONTHS? IT MUST BE BECAUSE I'M A BITTER OLD HAG AND YOU'RE ALREADY TIRED OF ME!

Prince Charming: ... I was writing your book! And everyone loves it!

Prince Charming: Except for my ex-wife Cinderella, who tried to use a spell to annul the existence of my children.

Prince Charming: Oh don't worry - that problem was quickly solved a chapter later and off-screen by a just-introduced secondary character!

1 Bestseller than Rips Off Wicked

The Word: I love fairy tales. This is no secret. I watch Disney. I read the Grimm tales. I like the colour and the magic and the trickery. And I love how the basic enjoyability of these stories can translate so easily into different kinds of retellings and interpretations. So you'd think something like Wickedly Charming would be right up my alley, right? Wrong.

I mean, it has a good concept. At first. Our heroine, Mellie, is a perpetually-outraged woman who's the leader of PETA - the People for the Ethical Treatment of Archetypes (ha ha - it's a tired old joke that only gets older). She's tired of the way those awful brothers Grimm told all these lies that have now become the basis for much of modern literature. And she should know - since she's doomed to go down in history as Snow White's Evil Stepmother.

Now, how did the Grimm brothers find out about the magical world of the Kingdoms all fairy tale characters live in? Why did they tell such obvious lies? Why did they add parts like the magic mirror or the huntsman? These things aren't even discussed.

And Mellie's solution to the centuries of untruths? Holding protests at bookfairs, screaming at bookbuyers, and calling for the banning of books. Because they are full of lies, you see.

The heroine wants to ban books. Yeah. Let that sink in.

Mellie's counterpart is Prince Charming. Well, one of them - Cinderella's Prince Charming. Still smarting from his divorce from Cinderella (and more on her wretched characterization in a minute), he's now working as a bookseller in The Greater World (a.k.a. The Real World), which gives him access to the bookfair. There he meets Mellie and we get the standard unpleasant scene where the Bitter Bitch heroine unloads all of her problems on him and makes a lot of baseless assumptions about how great his life must be.

The heroine is not only a Bitter Bitch, but she's possibly dumber than a box of Rapunzel's hair, since Prince Charming literally has to explain the concept of fiction to her. She doesn't understand how people can just make stuff up on the spot and put that into writing. Isn't that lying?

Prince Charming, despite being a rabid bibliophile, is somehow not repulsed by her clear disdain and ignorance of literature as a whole. Instead, she's the prettiest girl he's ever seen. So he decides to help her. He explains to Mellie that screaming at people like a demented self-righteous howler monkey is not the best way to change hearts and minds. Taking a moment to dump on the entire subgenre of paranormal romance, he shows how ugly nasty vampires changed their PR by getting people to write books where they are the tortured heroes. So perhaps Mellie should write a book that tells the story from her point of view - and he'll be super happy to help her write it.

So, the concept itself is a strong one - the idea that fairy tales oversimplified the complex family dynamics of certain characters - but the novel itself just does not follow through, and instead does the same thing the fairy tales did. It still tells a lazy, underdeveloped, oversimplified story, just with the villain-and-hero roles reversed. Oh, all the stepmothers were just overworked women in tough situations who just made a few mistakes, and all the princesses were spoiled, evil, clawing, envious bitches. How convenient.

There's also the laughable fact that while the protagonist CONSTANTLY RAGES about how older women are made into villains for fairytales, the only recognizable villain in Wickedly Charming IS AN OLDER WOMAN: a middle-aged Cinderella, who is cruelly shoehorned into the Completely Evil Murderous Ex Role. This book, whose heroine complains that fairy tales distort ideas about women, gives us a villain who literally tries to wish her children out of existence because she loves attention, money and the spotlight too much. One small step for Cinderella, one giant leap backwards for womankind.

This story could have had a perfectly decent, nuanced, subtle plot where Prince Charming and Cinderella divorced because they didn't really know each other - they were two dazed teenagers with stars in their eyes who got married after knowing each other for less than a day thanks to some preternaturally tiny footwear. It happens. That would have been a great plot point. But instead, the novel goes the cartoon route and makes Cinderella a monstrously selfish, unambiguously evil sociopath.

How am I supposed to like Mellie, either? She's rude, she's bitter, she's envious, and she's so. Effing. IGNORANT that I just couldn't stand her. She doesn't understand one thing about how the world works and is just so blindly hateful of any woman younger and prettier than her (which, hey, SOUNDS AN AWFUL LOT LIKE HER CHARACTER WAS IN THE ORIGINAL FAIRY TALE, HMMMMM). And nothing about her character is consistent. It turns out she secretly burned out her magic keeping Snow White alive, and kept it a secret from everyone - and yet she's spent centuries stewing in impotent rage about how people misconstrue her actions. You can't tell me that she doesn't care what anyone thinks - and then make her number one motivation to change what people think about her!

And what about Prince Charming? Talk about ruining the Beta model of heroes. He's not a Beta, he's - hmmm, what's the last letter of the Greek Alphabet? There's shy, and then there's just plain spineless. This quivering, flavourless Jell-O mould of a man is frightened of everything and pushed around by everyone and is constantly nervous and insecure (despite being breathtakingly handsome). He scurries to and fro so regularly I wondered if he was one of the mice turned into a footman by mistake. And believe me, if you've read my blog before, you know I have a particular tendre for shy Beta heroes. This hero, however, takes it a step too far. Several times while reading this novel I wanted to shout at him to nut up, take it like a man, and stop (literally!) running away from the heroine.

The story is simplistic, the conflict (where there is any - the greater part of this novel is internal moping/bitching, let's be honest) is contrived, and the protagonists are just completely unlikeable. Ultimately, Wickedly Charming calls the kettle black - it lashes out at all fairy tales for being distorted and misogynist and poorly told, and yet it doesn't try to rise above any of these tropes, either.
D
Posted by AnimeJune at Sunday, January 29, 2012