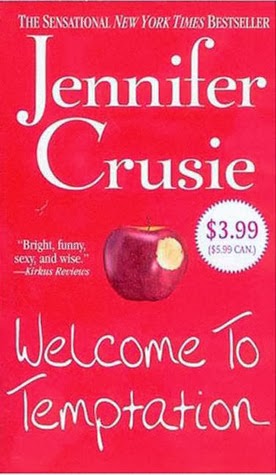 Coming off the disappointment of rereading Sing the Four Quarters, I was overjoyed to discover that time (five years, to be exact) has not dulled my enjoyment of Welcome to Temptation, one of Jennifer Crusie's best novels and one of my favourite contemporary romances ever.

There's not much more I express in this reread review that my original review didn't, although I can reiterate the aspects of this novel that made it one of my absolute favourites.

First of all, I loved the sheer number of subplots packed into one novel. Of course, we have the wonderful romance between Sophie, the sole white sheep in a family of con artists, and Temptation's mayor Phineas T. Tucker. But we also have Sophie's changing relationship with her manipulative sister Amy, the suspicious death of Phin's wife, the murder of a blackmailing TV anchor, the filming of a movie that inexorably turns into porn, the election shenanigans between Phin and his hypocritical opponent Stephen Garvey, and various love triangles, secrets, adulteries, and secondary romances. There is a lot of stuff going on in this novel, and reading it a second time really brought home the amount of skill Jennifer Crusie must have had to organize all these narratives into something cohesive and enjoyable.

Second of all, I loved Phin. I liked Sophie, too, but Phin really is one of the most adorable romance heroes ever. He's confident, he's assertive - but he's also really mellow and laid-back, which is unusual for the heroes in the novels I read. Most of the heroes I've come across in romance lately are perpetually drowning in angst or stressed out by how controlling they are or risking an aneurysm by how hard they have to fight to keep it in their pants.

But Phin? He's mellow. When he wants something, he goes after it, but he's a charmer, not an enforcer. He solves his problems with charisma and dialogue. Really, really good dialogue. Some of the best hero-heroine banter I've ever read comes from this very book.

This is going to be a fairly short review because honestly, my opinion of this novel hasn't changed much from when I first read it five years ago. It's an astoundingly detailed and hilarious small-town romance with great staging, an enormous but well-organized cast of characters, more subplots than you can shake a stick at - and a phenomenal romance between two likeable characters. At no point was I bored, annoyed, or anything less than enjoyably entertained while reading this novel.