"Ask the Passengers," by A.S. King 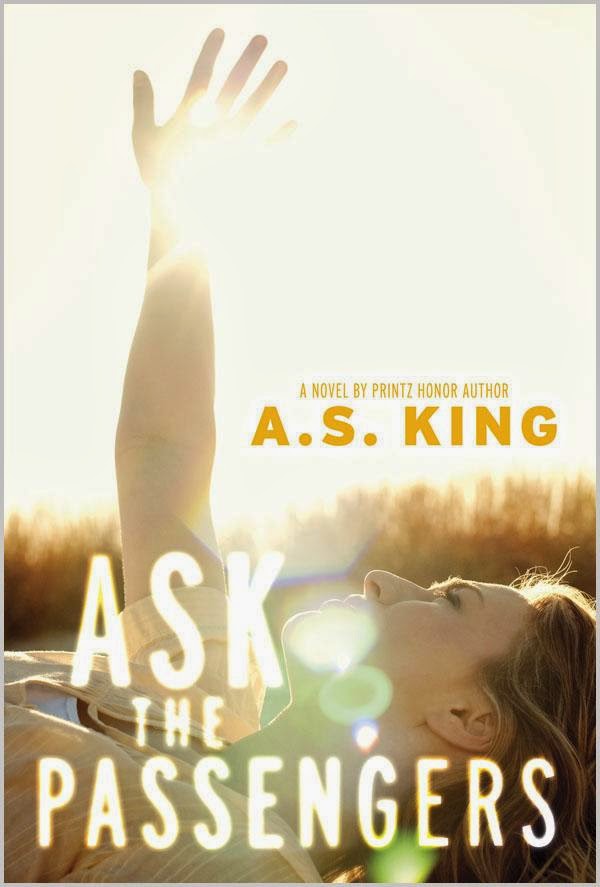 The Protagonist: Astrid Jones. As the outsider in a close-knit small-town, she's never been one of the crowd.
Her Angst: When she realizes she's in love with a girl, she fears becoming even more of an outcast.

Kristina: Astrid's best friend, one of the most popular girls in Unity Valley, and a closet lesbian. While she pushes Astrid to be open about herself, she's more in love with the small-town limelight than she's let on.

Justin: Astrid's other best friend and Kristina's beard boyfriend. He and Kristina try to involve Astrid in more activities.

Dee: An open lesbian from another school district, she works with Astrid at a catering company and is love with her - although she wants to get more physical than Astrid is comfortable with.

Ellis: Astrid's little sister, who has totally glommed on to small-town life - including the bigoted aspects.

Astrid's Mum (because she's not worthy of a first name right now): A vain, superficial, gossip-obsessed agoraphobe who cares more about what other people think than how her daughters feel.

Astrid's Dad (ditto): A loser deadbeat who's decided he'd rather "secretly" smoke pot in the attic than be a parent to his kids.

The Word: Although I'd been asked to read this as the March Book for the Forever Young Adult Book Club, this book had already been on my TBR for a while thanks to the feverishly positive reviews from several bloggers I respect.

When Astrid was nine, she and her her family moved from New York City to Unity Valley - a small town that is small in All Of The Ways - including small-minded. In such a deeply-conservative town glued together by malicious gossip and dusty tradition, Astrid has never truly fit in - even without revealing the secret she's been hiding from everyone.

And her family is useless - her little sister Ellis has firmly embedded herself in townie life and her superficial, unloving mother Claire is too busy attempting (and failing) to do the same thing to involve herself with Astrid's problems. Astrid's father, meanwhile, has decided to check out of being a father and husband by developing a drug habit. The last thing Astrid wants is to trust any of them with her secret - "tolerant" is how they want to be perceived, not how they really are.

You see, Astrid's secret is that she is love with a girl - a feisty hockey player named Dee.

Astrid's not exactly scared of being gay - rather, she's scared of being shoved into the "Gay Box."  She's scared of having other people decide who she is and what that means before she has a chance to, which is why she still hasn't told her best friends Kristina and Justin, even though they've been each other's mutual beards as Unity Valley's Homecoming Couple for years. She's scared that "coming out" will irrevocably label and define her before she's really sure who and what she is. Does being in love with one girl make you gay? What if you don't feel this way forever? What if you change you mind? And shouldn't people care that there's more to you than who you're in love with?

It's a fascinating argument that reminds me strongly of Openly Straight - only I think Ask the Passengers handles the angst of your identity being defined entirely by your sexuality in a much more nuanced way. A.S. King is a master at showing both sides of Astrid's insecurity - on the one hand, she's scared of people making decisions for her. On the other, she's just as terrified of making decisions for herself.

She'd much rather coast along in limbo with her head down and let the cards fall where they may, but that's just a decision to not decide, and it comes with consequences the same as any other choice. So when Dee pressures Astrid to come out - I can see that she's pushing Astrid on something that should be Astrid's choice, but I also understand that Astrid's unwillingness to commit is hurtful.

It's really a testament to A.S. King's characterization that Astrid never comes across as wishy-washy or passive as she slowly grows brave enough to decide to decide. Part of that, I think is Astrid's habit of "asking the passengers." To fight her own feelings of being unloved and judged, her favourite pastime is lying on the picnic table in her backyard and sending love to the passengers in the planes that pass by. Her attempt to fight indifference with intentional feelings of love says so much about her, especially when she silently sends love to her family even after they humiliate or ignore her.

All in all, this was a thoroughly insightful book with an intriguing protagonist.
B+
Posted by AnimeJune at Wednesday, March 19, 2014