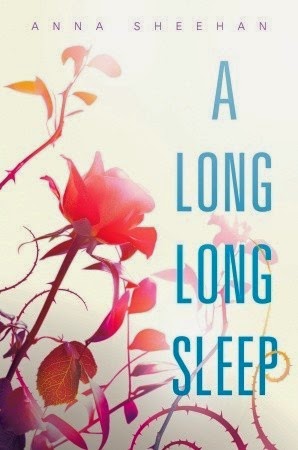 The Protagonist: Rosalinda "Rose" Fitzroy. An heiress who wakes up after spending 62 years in frozen stasis.
Her Angst: Her entire life as she knows it is gone - her parents and friends are dead, and the world has changed in unfathomable ways. Her enemies, however, may still be alive...

Xavier: Rose's childhood friend and first love. Rose met him as an infant, but as her parents put her back into stasis, their ages soon started to match up.

Bren: The boy who accidentally wakes Rose up from her frozen sleep, and one of the few friends she makes in this uncertain future.

Otto: An alien-hybrid boy who attends school with Rose and Bren, he commiserates with Rose on their shared weirdness and outcast status.

Mr. Guillory: The CEO of Rose's parent's company - a shady character who is not happy that this pretty popsicle has stolen his company out from under his nose.

The Word: I checked this book out from the library after reading an effusively positive review of it from the Book Smugglers. However, I found myself supremely annoyed with the novel and its protagonist. And yet - the ending turned the book around for me, and made me question my own reaction to it.

In this futuristic re-telling of Sleeping Beauty, 16-year-old Rosalinda Fitzroy wakes up from stasis to find a strange boy giving her mouth-to-mouth (the CPR kind, not the non-consensual sexytimes kind). To her horror, she discovers she's woken up 62 years in the future. Her wealthy parents bought a state-of-the-art stasis tube for Rose's protection and preservation, but died in a helicopter crash before they could thaw her out or tell anyone about her whereabouts. For six decades, her tube has been mouldering in a forgotten subbasement of her parents' condo.

Now she's awake, with a serious case of freezer-burn, and has unexpectedly inherited her parents' enormously powerful company, UniCorp. As Rose struggles to adjust to a strange future, grieve her deceased parents and boyfriend (a neighbour boy named Xavier), and tentatively develop friendships with the boy who woke her up (Bren) and the classmate who relates to her (Otto) - someone else isn't happy about her reappearance, and would just as soon put her back to sleep. Permanently.

For the majority of this book, I hated Rose. She was a cowering, snivelling, useless, foolish, self-loathing, doormat martyr of a heroine who stumbles around around in tears whining about how worthless she is while the men in the story tell her she's pretty and take care of her. She's ignored by her foster parents, exploited by her guardian Mr. Guillory, and attacked by a corpse-robot (for reals) and she has to be squeezed like a lemon before she'll even tell anyone she's unhappy or, you know, in mortal danger. What a moron. I couldn't stand her.

But then we start getting into her backstory. I suppose it is a kind of a spoiler, but for the purposes of my review I want to address it, so you've been warned.

I initially thought Rose was put into stasis for her own protection, or because her parents were hiding a high-tech secret life from her, but the answer was far more mundane, and saddening, than I'd anticipated: Rose's parents used stasis to abuse her. Wealthy and entitled, her mother and father would bring her out of stasis to play at being parents with birthday parties and champagne breakfasts and shopping trips - then put her back in whenever she acted out, or disobeyed, or parenting actually got hard.

They weren't interested in having actual offspring. They wanted a permanent child to worship and obey them. And when it looked like she was growing up, despite their most dedicated efforts to keep her childlike and cowed, they left her in the toy chest for good.

The ordinariness (in a sense) of this explanation, and the surprisingly clever way it was slowly unravelled throughout the story, saved this novel for me. Even the most melodramatic and portentous science fictional technology can and will be misused by petty, small people to solve their petty, small problems.

And it (finally) explains Rose's behaviour to a tee. Her intense dislike of herself, her tendency to shoulder blame for every bad experience, her refusal to complain about mistreatment or point fingers at people who are hurting her, it all makes sense because she's been raised to believe her life deserves to be put on "Pause." As much as I dislike Rose as a protagonist, she's a realistic reaction to trauma and abuse. It's also more than a little fascinating to watch Rose's painstakingly slow realization that she even was a victim of abuse.

I still didn't like this book. The heroine was just too passive and whiny for me - but, looking back on my experience reading this novel, that was more due to my own reading preferences than a literary failing on the novel's part. Rose's character is well-developed and realistic. The narrative doesn't push her too far or end her story with a too-soon love interest (which is nice, because her entire relationship with Xavier squicked me the fuck out). The science-fictional setting was detailed and rounded out - almost too detailed, with a lot of elements that weren't completely relevant to the story.

As a book about the insidious nature of emotional and parental abuse, A Long, Long, Sleep was clever and detailed. I didn't like it because, frankly, I don't like reading modern/futuristic fairy tale retellings where the heroines are further victimized. But to each their own. Consider your own reading preferences - if yours are anything like mine, I'd steer clear.
B-
Posted by AnimeJune at Friday, April 18, 2014

Labels: B- Reviews, science fiction, YA