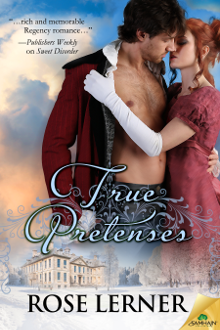 The Chick: Lady Lydia Reeve. A genteel lady whose family has traditionally held a high political interest in the town of Lively St. Lemeston.
The Rub: Now that her father's dead, her skittish younger brother  is content to let that interest lapse in order to pursue his own desires. And Lydia has no money of her own to maintain her family's influence.
Dream Casting: Isla Fischer.

The Dude: Asher Cohen, a.k.a. "Ashton Cahill." A Jewish con artist on the run with his brother and partner in crime, Rafe.
The Rub: Rafe is tired of their life and wants to go straight, so Ash needs to concoct a truly lucrative swindle to give Rafe safer life options than the army.
Dream Casting: Mark Ruffalo.

The Word: You know what time it is? TIME FOR ANOTHER ROSE LERNER NOVEL! To set next to In For a Penny, Lily Among Thorns, and Sweet Disorder, we have True Pretenses.

Our novel opens on two brothers, Ash and Rafe, in the midst of escaping after a successful swindle. Orphaned, impoverished, and Jewish, they've eked out their outcast existence through theft, trickery and clever con artistry. However, Rafe (the younger brother) has tired of the game and wants to go straight. His protective older brother, Ash, reluctantly agrees, with one caveat: they must perform one more swindle, to set Rafe up properly for his new life of law abidance.

Ash travels on ahead to the town of Lively St. Lemeston (the same setting from Sweet Disorder) and discovers low-hanging fruit ripe for the plucking: Lady Lydia Reeve. Her highly political father, Lord Wheatcroft, held a heavy interest in Lively St. Lemeston before his sudden death, but his son Jamie now balks at the idea of continuing the tradition. Lydia's determined to hold onto their family's interest until her brother comes to his senses, but the only funds at her disposal come from a trust that will only be released upon her marriage.

I'll be honest - the set-up to this novel doesn't make a whole lot of sense. It's kind of confusing - at first, the brothers plan to offer Lydia access to her trust through a sham marriage to Rafe (in exchange for 3000 pounds) but then Ash wants Rafe and Lydia to marry for realsies because they're so cute together and it'll keep Rafe out of the army. What?

Thankfully, before that ridiculousness can happen, Rafe and Ash get into an argument that ends with their estrangement, leaving Ash to offer himself to Lydia instead. The plot is probably the weakest part of the novel, and the weakest of all Lerner's novels to date. After the initial set-up, the rest of the book is virtually conflict-free until the too-sudden Black Moment at the end. Ash and Lydia get along famously about 99% of the time, with the other 1% devoted to depressing self-examination.

So why did I keep reading? Despite the fact that there is relatively little drama between Ash and Lydia, their individual characters and habits are fascinating - Lydia's, especially. She is very much a conservative, devoted to maintaining the traditions of the past, suspicious of change, and almost pathologically afraid of showing weakness or negative emotion of any kind. At the beginning of the book, her methods of expression are all but muzzled by her refusal to utter anything that might possibly reflect badly on her father or brother. She has been raised to cater to the needs of others while repressing her own. It becomes a relief to talk to Ash, someone who cannot judge her since his social status is virtually nonexistent.

Ash is a more nebulous character, but perhaps that's intentional. His Jewish identity is important to him (sex with random ladies is a worry because how does one explain the lack of a foreskin?), but otherwise, he's afraid to define himself as anything other than "Rafe's brother." Finding and committing to an identity is a new experience for him. He's a con man without an emotional off-switch. His success at conning developed from his ability to empathize with and draw closer to the rubes he fleeced, leaving him incapable of trusting other people's emotions - and his own, least of all. Does he really enjoy Lydia's company? Or is he just desperate to be liked, because likeable people get what they want? The only emotional stability he's ever preserved is his love for Rafe, and without him, he's adrift.

The enormous status gulf between Lydia and Ash is also entertaining as it allows for a thorough examination of privilege. Ash was no Dickensian urchin - his past involves theft, graverobbing, fencing, and sex work. The contrast between the protagonists is especially potent because their childhoods were superficially similar - both Lydia and Ash were motherless children unfairly thrust into parental roles over their younger siblings. However, the vast difference in their upbringings and environments invites interesting comparisons, most especially in how they've learned to lie to other people.

At the same time, even as Lydia's pampered upbringing is contrasted and compared, her own feelings of dissatisfaction, grief and loneliness are not invalidated just because she's wealthy.

While True Pretenses is not the strongest of Rose Lerner's novels when it comes to plot, it's still a refreshing, pleasantly entertaining read.
B
Posted by AnimeJune at Sunday, March 29, 2015