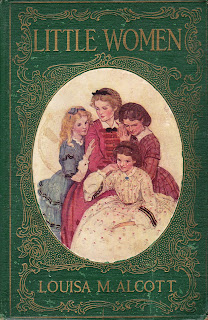 There are three stages to reading Louisa May Alcott's Little Women.

Stage One is when you read it for the first time because your mother bought it for you, usually around the ages of 12-13, and you love it. Because there's Jo - who's awkward and a tomboy and a writer and likes books just like you! And has sisters who love/annoy her, just like you! And has a totally cute next door neighbour who she loves and this is where the comparison ends because you would TOTALLY marry Laurie, what the HELL were you thinking, Jo? He's rich and half-Italian and a musician and looks vaguely like Christian Bale! Instead she marries some random old dude (HE'S FORTY) with a beard that you just KNOW is worse than Laurie's terrible Rejection-Goatee from the movie.

Also, Amy is the worst and Beth is weird.

Stage Two is when you read it as a smart, sophisticated, cynical intellectual (between the ages of 19-23) because you remember loving it as a kid, and are surprised by how much you hate it. Good Lord, did you actually love this novel at one time? Everything is sugary and preachy and condescending, and a March girl is always sewing or darning something in literally every scene ever. That's Beth over there, embroidering a handkerchief as Amy falls through the ice. I'm almost positive Meg managed to tat some lace while she was wearing high heeled shoes and sipping champagne like a godless harlot while Laurie looked on in Righteous Patriarchal Disapproval. This time around, you can only stand about a hundred pages of Marmee's cheesy moralizing, creepy Beth with her broken doll hospital and Foreshadowings of Death, and Amy being The Literal Worst before you slam the book shut and write the novel off as something that just doesn't age well.

Stage Three is when you pick it up again in your late twenties. Partly for nostalgia. Partly to make a few more jokes at its expense (for you haven't completely outgrown your cynical I'm So Clever phase). This is the stage where you stop pausing to point out the things that haven't aged well (it takes place in the 1860s, remember) and rediscover the parts that remain stunningly timeless. When you read it as a girl, you loved and remembered it primarily as a book about girls, and as a Cynical Teen you couldn't even read past the girl part. It's Stage Three when you rediscover what this book has to say about women.

In case you are unfamiliar or would like a reminder, Little Women is about four sisters (Meg, Jo, Beth, and Amy March) who live in genteel poverty in 1860s New England. The first half of the novel deals with the sisters and their mother (Marmee) eking out a living on their own while the March patriarch is off serving as a chaplain in the army. With their male anchor away at war, these five women work tirelessly together - not only to support themselves financially (both Meg and Jo work full-time jobs), but also emotionally.

Poverty is a big issue in this novel, and during Stage Two, I dismissed this first half as a simplistic sermon on how "We Don't Need Money Because We Have Twu Wuv." During Stage Two, I saw the Marches as this judgy family that repeatedly hammered home how much better they were then those Godless Immoral Rich People because they relied on their Pure Christian Love and not filthy, filthy lucre.

Reading in Stage Three gave me a completely different interpretation. It wasn't, "We Don't Need Money Because We Have Twu Wuv." The Marches don't have a choice between poverty and wealth. They're poor, full stop. It's not about how being Poor makes them Better, it's how they struggle and fight to be Better despite being Poor. A good chunk of the novel's first half deals with the girls battling the incursions of envy, greed, despair and bitterness that come from being poor. Especially Meg. One of the details I missed during previous readings was that the March family used to be rich, and Meg, as the eldest sister, has the clearest memories of what their lives used to be like before disaster struck. This informs so much of her character - her conflicted feelings about wealth and status continually influence her life and her eventual marriage, and Alcott portrays these feelings as natural without slighting Meg's ultimately virtuous character.

The second half of the novel deals with the girls growing into women, mustering and altering their lives' ambitions, and learning how to deal with the men in their lives. While I recognize the book is a product of its time, I was nevertheless astounded and delighted by the strong and amazingly relevant themes about feminism and art I took away from this novel. Marmee trains all her girls to be independent - to value hard work, to develop useful skills, to maintain a moral compass, with or without a husband. She'd rather her daughters be happy old maids than unhappy wives.

Meg learns that even a happy marriage has hiccups (hilariously still-relevant hiccups) that need to be resolved with open communication and understanding. My favourite scene is when Meg, a new mother, has to be cajoled into letting her husband John look after the kids because she deserves some personal time. Imagine that.

Jo's storyline remains my favourite, and now that I'm an author, too, it's great fun to recognize how little has changed about being a writer. Jo struggles with the morality of writing immoral garbage (gasp! Genre fiction!) because the pay is good, handles an editor's notes on her manuscript, reacts to conflicting reviews (GoodReads would destroy her), and learns that life has to be lived before it can be written about.

SURPRISE: Laurie's a Bit of an Asshole.

Little Women is all about girls growing up, and Laurie and Jo's bromance perfectly demonstrates the distinction between friendships formed in childhood and adult romantic relationships. Mature romantic relationships require a bit more than simply Liking Someone a Lot, and to say this in a Victorian novel?  This is huge. Jo and Laurie are brilliant friends, but they're both rambunctious and impulsive and bring out the impulsiveness in each other. It's hilarious when they're kids because it gets them into entertaining scrapes, and their siblings and relatives are always close at hand to yank them back when they skirt too close to the cliff's edge. But as adults, anything more than friendship between them would be a hot-ass mess.

One of Jo's most important lessons in her artist's journey comes when the simple story she writes to deal with Beth's illness and death winds up phenomenally more successful than all her sensationalist gothic fantasies put together. Writing something true will ultimately resonate more with readers than writing something that's merely clever. Imagination is important, but the stuff that you write has to have an emotionally honest foundation to stick around long enough in people's minds.

That's what I got from Little Women - when I first read it as a child, I revelled in discovering a young heroine who was so much like me. Reading it now as an adult, I feel the same way - I just relate more to second-half Jo, who struggles with her writing and her sisters' successes and wonders what she's going to do with her life and what choices she needs to make to speed up the process. Once I put down my Horn-Rimmed Glasses of Irony, I rediscovered the emotional truth of Little Women that's made it such a perennial favourite.

If you haven't read Little Women in a while, maybe it's time to pick it up again. The results just might surprise you.
Posted by AnimeJune at Tuesday, June 09, 2015

Labels: A Plus Reviews, classic, Personal