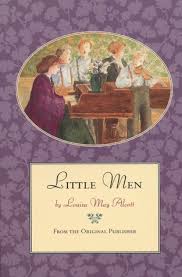 So while Little Men doesn't tell as interesting of a story as Little Women did, it's still a fascinating look into the mind of a 19th century feminist and her idea of what the ideal school would be like. While some of her ideas and themes are problematic when seen in a modern context (especially her depiction of disabled people), the amount of stuff she got right is still encouraging.
B
Posted by AnimeJune at Thursday, July 16, 2015