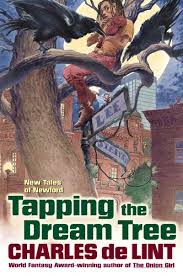 What I enjoyed the most about these stories is that although characters might reference events from other collections or novels, I never felt lost or left out because I was a de Lint newbie. Tapping the Dream Tree is an effective Charles de Lint taster - each story is a satisfying standalone that still drops delicious hints about his pretty impressive backlist. I may have to try one of his novels, next.
B
Posted by AnimeJune at Wednesday, September 30, 2015