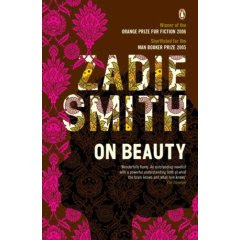 Sorry about this - I'm still fiddling with the perfect format for my reviews. Anyway - wow, I have to say, wow. I wonder how I might have read this book had I not read Howard's End first? I read about a chapter in and my strongest thought was: "I am reading a re-make." That astounded me. I've seen remakes of movies, re-adapations of Shakespeare places, covers of songs - but I didn't think people were, well, allowed to remake books.


Yes, eventually On Beauty meanders off in its own particular direction, but the first few chapters are pretty darn close to those of Howard's End. Howard Belsey, the white, British professor of art history at fictional American university Wellington, flies to London to see his son, Jerome, when his kid e-mails that he's engaged. Just like the previous book, Howard shows up just in time for the two stupid kids to call it off. Again, similar to the previous book the Belseys (multiracial, radically liberal, intellectual) do not get along with Jerome's ex-intended's family, the Kipps (black, viciously conservative, religious), but nevertheless Howard's overweight, African-American wife Kiki quickly befriends the ailing Mrs. Kipps, so much so that when Mrs. Kipps kicks the bucket, she leaves a handwritten note leaving Kiki a priceless painting that outrages her family.

Smith deals with a great many characters, and I guess it's to her credit that they aren't all pretentious, oblivious, spoiled elitists like those in Howard's End. Most of them are, but not all of them. Howard, the de facto protagonist, is a boorish, controlling pig who, while claiming to be trying to get back into his wife's graces after a disastrous affair, continues to do ridiculously idiotic and selfish things. His daughter, Zora, feels unattractive and socially awkward, but is nevertheless willing to scheme and manipulate to get her own way. Youngest son Levi has a few sweet moments, but his overflowing idealism combined with a complete ignorance of the "street" he claims to belong to do not bode well for his fate. And while Forster was more charitable towards the Wilcoxes in Howard's End, Smith does not place very much focus on the Kipps at all, preferring to portray them as hypocritical, homophobic, and cruel bigots. At least Forster gave the rival family a little depth.

Anyway, though, there are a few characters to root for. While I found it hard to believe Margaret and Mrs. Wilcox could ever get along, I found no trouble believing Kiki and Mrs. Kipp's relationship. Kiki is an astonishingly colourful, warm, and well-rounded character, so much so that it only increased my hatred of those characters who treated her badly - that is, nearly every other character. Smith evocatively portrays her humiliation at Howard not only sleeping with another woman, but with a skinny, white woman who also happens to be a family friend.

In many ways, it's more interesting than Howard's End, because most of the theorizing takes place in dialogue that is more or less dynamic, rather than the stifling dull internal exposition that Forster uses. It still isn't enough to save this book - I found myself out of my depth among people who were so interested in discussing the theory of art (is this a painting for painting's sake? Or is this a painting for all paintings? etc.), and the theory of love and the theory of justice, beauty, etc, that they never have time to see or do any of it in practice. I felt detached from all of the characters except Kiki, so in truth I had no interest in seeing how their petty, narrow lives would turn out.

Patrick is sympathetic. (Translation: "Nice try, really, but it still wasn't all that good.")