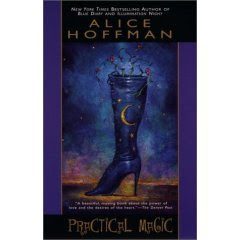 I've read books that have eventually been turned into movies, and I've watched movies and then gone and read the original books (The Hunchback of Notre Dame is actually at the top of my TBR pile now. Seriously.). For the most part, while some of the movies have been fun, the books have been buttloads better, if for nothing else, than because there is more space for the goodness that a two-hour movie just doesn't have time for.

So, let's just say I had some high hopes for Practical Magic. I'd read Alice Hoffman's The Ice Queen and adored it, and I'd seen the film Practical Magic and while on the whole I didn't quite like it, there were certain scenes and themes that were pretty interesting - so I figured the book had to be about a million times better, right?

Well, no. In the book, two orphaned sisters are raised by a crotchety pair of spinster aunts after their parents die in a fire. Sally, the eldest, is determined to be good, sensible, helpful, and logical because she's secretly afraid the aunts will cast her out if they aren't pleased with her. Gillian, the younger, grows up into a gorgeous, devil-may-care wild child who eventually runs away, promising never to come within a hundred feet of the aunts ever again.

Their aunts aren't explicitly labelled as witches until the end of the book, but it's obvious pretty early on that they are considered to have special powers. They (and by extension, the sisters) are ostracized by the superstitious, but women will still come to the aunts' back door begging for love potions. The experience of spying on the aunts' customers scares the two girls about love - the customers are portrayed as pathetic, selfish, troubled women who have no idea what they're asking for and are ultimately betrayed by their own wishes. Both girls decide never to be cornered that way.

However, both sisters end up, against all odds, trapped and severely hurt by love. Sally falls in love with a hardware salesclerk named Michael, but after he's killed in a fated accident she has a nervous breakdown for about a year, and spends all her time thereafter devoting her life to her own daughters instead of serving herself. Gillain, meanwhile, flits about with a number of men, but unwisely falls for an abusive drug-dealer named Jimmy. After he inadvertantly dies, Gillian returns to stay with Sally, and the reunited sisters, along with Sally's daughters Kylie and Antonia, eventually rediscover all the good things that come with the heartbreak of true love.

Practical Magic is one of Alice Hoffman's earlier books, and while I'm glad to say her style improved by the time she wrote The Ice Queen, the storytelling in this book left a lot to be desired. Here, Hoffman does an enormous amount of telling over showing. We're told that Sally is the responsible, logical one who refuses to believe in fate and magic and love, and we're told that Gillian is the insecure wild one who thinks she's isn't worthy of true love. How we are told is through rather blunt internal musing and a large number of lists. Hoffman lists things like a madwoman in this book. To evoke a bizarre childhood, instead of focusing descriptively on a few special scenes, she creates a grocery list of barely-described, mundane actions - and she does it all the time. Lists of Sally's accomplishments, Kylie's insecurities, the sisters' cherished memories, common superstitions, chores, fears, recipes -- on and on and on. It is such a frequent narrative habit that it becomes quickly tiresome, and gives the details a shallow quality.

The pacing of this book also has a disturbingly random, out-of-the-blue element to it. Every single person - I am not making this up - every single man who falls in love with Gillian, Sally, or her daughters does so instantaneously, with one glance followed by flash-of-lightning-certainty that renders them virtual slaves to the girls' will. This leaves us with an uncomfortable lack of romantic build-up, which in turn explains very little about why Sally and Gillian are so attractive. I can imagine it happening once, but four times? Also, each character seems confined to a set amount of emotional triggers, where if one is accidently tripped, it can send the character over the deep end or provoke a certain unexpected action, which is convenient for the narrative but appears pretty sudden and unrealistic to me.

However, like The Ice Queen, the magical elements of the book are restrained and subtle. For all her telling and her lists, Hoffman never comes out and says: "Hey, the aunts are WITCHES - so maybe THE GIRLS ARE TOO." Instead, she uses descriptions, scenery, and setting to demonstrate the aunts' otherworldliness, letting the magical occurances build up slowly so that by the time a Big Magic happens (somewhere near the middle, concerning Gillian's dead boyfriend), it fits in smoothly with the tone of the novel and gives it a consistency while easing the suspension of disbelief.

In many ways, the novel has a fairy-tale quality to it, probably intentional. It explains the frequent hairpin turns in character and narrative development, the frequency of love-at-first-sight, and the intense and sudden changes that occur around Sally and her family. While I love fairy-tales, Practical Magic demonstrates how some elements of folktales and myth just aren't suited to a long-format story. The ritualization of the formula, that fits a shorter tale, is repetitive when stretched over more than three hundred pages.

This might have explained why I found the movie more enjoyable - except that the movie uses very little of the material from the book. In the movie, for instance, there is a curse that is supposed to kill the true love of every woman in the aunts' family, the aunts are more present (they're little more than bookends in the novel), Sally's girls remain children (they're teenagers at the end of the book), and Sally ends up moving back into the aunts' house when her husband dies - which does not happen in the novel, in which Sally makes a point of leaving the aunts' house when she's widowed, in order for her kids to have what she believes is a "normal" life.

In the movie, I particularly liked that the Gary Hallet (Aidan Quinn) character turns out to be the "perfect man" that Sally wished for as a child - with one blue eye and one green eye, who can flip perfect pancakes, and ride a horse backwards and forwards - but that particular cute tidbit was invented, apparently, by the screenwriter (Robin Swicord), and Gary and Sally's true relationship is, like nearly every other relationship in the novel, instantly set in stone.

Neither interpretation of the story was completely engaging - while cute, the film occasionally verges into the "too cute" realm of Bewitched, and isn't nearly as subtle with the magical element (another change: in the book Sally and Gillian never use any magic of their own - but they each have specific magical powers in the film) and although Alice Hoffman's language is as poetic and beautiful as ever, the narrative is unfocused and all over the place so there wasn't a lot to hold my interest.

Topher is disappointed. ("I kinda liked the movie better...")
Posted by AnimeJune at Saturday, April 07, 2007