"Again the Magic," by Lisa Kleypas 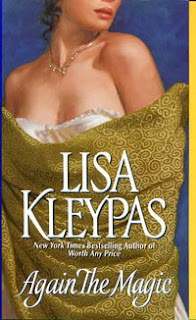 The Chick: Lady Aline Marsden, younger sister to Marcus (It Happened One Autumn) Marsden. She fell in love with McKenna, a servant of illegitimate parentage, but was found out. Her cruel father threatened to ruin McKenna's life if he ever came back, so she lied and told McKenna that he was an "amusement," but too lower-class to love.
The Rub: A few months after McKenna was sent packing, she was involved in an accident that left gruesome scars up and down her legs.
Dream Casting: Frances O'Connor, despite her involvement in that terrrrible Mansfield Park adaptation.

The Dude: John McKenna, a servant who left the Marsdens' service after Aline allegedly betrayed him. He moved to America and became a wealthy, talented, but ruthless businessman - albeit one who could never forget the love of his life.
The Rub: After twelve years, he returns to Stony Cross Park (the Marsdens' seat) - publically, to do business with the new Earl (Marcus), but secretly to punish the supposedly cold, calculating woman who broke his heart.
Dream Casting: It wasn't easy, but eventually I settled on Christian Bale.

The Plot:
McKenna: I love you!

Aline: Oh! Nothing could hurt more than this!

Aline: *on fire* I STAND CORRECTED!

Twelve Years Later
McKenna: That bitch. I know how I'll get my revenge! Give her dozens upon dozens of orgasms! That'll teach her!

Aline: Really? Because I could do with a bit more of your vengeance, if you don't mind.

McKenna: Well, is there anything else you haven't told me?

Aline: Um, I have scars on my legs I was afraid to show you in case you rejected me.

1 Romance Involving Secondary Characters (Livia and Gideon, gettin' it on)

The Word: This novel was suggested to me by the folks at Eloisa James and Julia Quinn's message board, when I mentioned to them the revenge plot I found so sickening in Susan Mallery's Sweet Trouble. Some suggested I read this offering by Kleypas, as it also had a revenge plot, so that I could see how a revenge scheme between the hero and heroine could be done well.

Aline Marsden and McKenna, a stable boy in her father's household, enjoy a secret, idyllic romance at the novel's start. Both are teenagers, passionate, and carefree, and yet both are still very aware of the dangers of their feelings for one another. Aline's father is one of the most powerful earls in England, and McKenna is a stable boy, and one of illegitimate parentage, at that.

When someone tattles on Aline and McKenna's trysts, Aline's father, the Earl, informs her of his plans to send McKenna away, and then he threatens to destroy him if he ever comes back. Aline knows that McKenna won't go quietly as long as there's a chance to maintain their relationship, so she pretends to dismiss him, claiming her feelings were only exploratory and that she'd rather flirt with real gentlemen and forget the embarassment of dallying with a servant.

Heartbroken, McKenna leaves. Twelve years pass. Aline, still unattached, acts as hostess for her brother's endless house parties with American businessmen. One day, a large contigent of wealthy industrialists shows up - one of whom is McKenna, now the business partner of millionaire Gideon Shaw. On the outside, McKenna's intentions are to conduct business with the new Earl, but he also harbours a secret desire to revenge himself upon Aline, preferably through seduction and then abandonment.

One of the differences between the revenge plot in Magic and, say, that plot in Sweet Trouble, is that Aline isn't fooled for a moment by McKenna's cold civility. She instantly recognizes his thirst for vengeance and, in an odd move, desides to fulfill it. If she gives him a few lusty tumbles, she figures, maybe he'll get over his obsession with her and find some peace, which is more than she can say for herself.

Even though her cruel father is many years dead, Aline still finds herself unable to reveal to McKenna the true extent of her feelings and the lie she'd been forced to tell him all those years ago. A few months after McKenna's initial departure twelve years past, an unfortunate kitchen accident left Aline with disfiguring burns all over her legs. In the present day, she can't bear the thought of revealing her hideous scars to McKenna and risking rejection, so she maintains the lie that she doesn't love him and never did.

Sounds like a delightful set-up, doesn't it? Sadly, no. In a nutshell, Again the Magic is the perfect example of the dangers of excess. I don't mean that the characters do things to excess, I mean excess in writing: an excess of sentimentalism, an excess of melodrama, an excess of sex scenes, and an excess in purple description. Do you know how when you eat a box of chocolates, the first ten pieces are delicious, but after that, you can't really taste the candy anymore? That's what started happening about thirty pages into this novel.

No one this book does anything by halves. All emotions are vivid, huge, and exaggerated: burning rage, deadening sorrow, heart-rending bliss, searing passion, blah blah blah. The characters are constantly battered about by hyperactive sentiment - no one is slightly perturbed, or somewhat disappointed, or more or less content. I could understand this in the first few chapters of the novel, which dealt with the protagonists when they were teenagers - young, and inexperienced and sensitive. However, by the time they're adults, they're still perpetually consumed by some particular emotion that is nearly always painful and that effectively hinders rational thought. Also, and this is a complaint I've often had with Kleypas' novels (even the pleasant Wallflower quartet): there are way, WAY too many sex scenes. I don't mean that they're too graphic, or raunchy - I simply mean that there are too many of them.

Every writing class and mentor I've ever had has told me that if something isn't directly relevant to the story I'm writing, it should be cut. No one, apparently, told the author this when she was writing the novel. Not only do we get dozens of mind-blowing moments of sexual congress from Aline and McKenna, we are also treated to a myriad of sexcapades from the completely unnecessary secondary romance between Aline's sister Livia and McKenna's business partner Gideon that seems to have been shoehorned in at the last minute.

It goes back to the box of chocolates metaphor - the sex scenes at the start are significant, but the more they happen, the less meaningful they get, and they less meaningful they get the less they contribute to the story, and the less they contribute to the story the more they bog down the plot. Very quickly, the intimate scenes became the literary equivalent of a commercial break, with Ryan Seacrest's voice booming in my brain, "Aline and McKenna discover new feelings for each other - BUT NOT UNTIL AFTER THE BREAK." *American Idol music*. Every time Aline and McKenna started panting for each other, I could feel the narrative pace coming to a dead stop.

With nearly every aspect of the novel dialed to 11 from start to finish, the book was the opposite of exciting: instead, it was dead boring. There were no dynamics - no heightening of tension, no quiet moments between scenes of significant action, no subtlety or adjustments to the tone or pace. It was just page after page of "OMG THIS IS BEAUTIFUL AND EPIC." This reminds me of another quotation, this time from The Incredibles - "If everyone is special, than no one is." It's the same thing here - if every single aspect of the novel is epic and grandiose and fantastical, than nothing really is. The total effect is lost.

As for the revenge plot - while I wasn't as offended by it as I was in Sweet Trouble, part of that could have been that McKenna's "dastardly" plan to avenge himself on Aline was so frustratingly vague. McKenna's plan at first seems to be merely to seduce and embarrass Aline into lowering herself to, ahem, dally once again with a servant. He puts this plan in motion by telling Aline precisely this, to which Aline responds, "Okay." Um, alright.

McKenna is an overpoweringly dominant character (as most of Lisa Kleypas' heroes are), so most of his seduction consists of telling Aline in no uncertain terms what he plans to do to her, while Aline squirms and giggles in secret delight at McKenna's "self-confidence." So ... McKenna's plan is to have great sex with Aline which she will also enjoy? That's not exactly a dish served cold. Also, McKenna, with all of his "dastardly" schemes, completely forgets to consider the threat posed to him by Aline's brother Marcus - a man with enough power and connections to do very, very unpleasant things to McKenna should Aline come to any real harm.

I'm sorry to say, that this wasn't a story that swept me away. Like a meal that's all dessert and no meat, it started sweet but soon became sticky, unsatisfying, and tasteless. C.
Posted by AnimeJune at Thursday, September 25, 2008