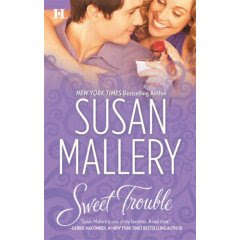 The Chick: Jesse Keyes, the youngest sister to Claire (Sweet Talk) and Nicole (Sweet Spot). Five years after leaving Seattle, pregnant with her ex-boyfriend's child, she's come back into town to make things right with her sisters and to help her son Gabe get to know his father.
The Rub: Jesse has a wild-child past that people are slow to forget. Plus, Jesse and her ex, Matt, did not part on the best of terms - when she told him she was pregnant, he called her a whore and turned her out.
Dream Casting: Throughout the series, it's been Kirsten Bell.

The Dude: Matt Fenner. A former geek, Jesse's guidance helped the wealthy computer programmer to gain some style. He ended up falling in love with her, but when he heard that she'd supposedly cheated on him with her own sister's husband, he vowed never to see her again. Even when she told him she was pregnant with his child.
The Rub: Even though Jesse told him about the baby, in the present day he's outraged and surprised that she never involved him in the child's life, and plans nasty revenge.
Dream Casting: Before I knew for sure that he'd turn out to be an abusive monster, I thought Topher Grace. Now, I think Saddam Hussein.

Jesse: Matt, it's yours!

Matt: WHAT?! How could you keep this from me? I will have my vengeance! I'll get you, my pretty, and your LITTLE BOY TOO! MWAHAHAHAHA!

Jesse: Matt, I love you.

All of Jesse's Friends and Sisters (with their powerful rich husbands): YOU'RE FUCKING DEAD.

Matt: I didn't mean it! It was a clerical error! Here, have some shiny diamonds!

All of Jesse's Friends and Sisters: Aww! How romantic! Marry him!

AnimeJune, and any reader with a shred of feminist sensibility or common sense: Motherfu@#%^&&@#$@#%!!

1 (Totally Not Secret, The Father's an Asshole) Baby

However, it didn't last. During a vulnerable moment (she'd found an engagement ring in Matt's luggage), her sister's husband tried to take advantage of her. When they were caught in the act by Nicole, the husband blamed Jesse, and because of her screw-up history he was believed. She got thrown out of the house, and worse - Nicole told Matt's mother, who told Matt, who then turned around and told Jesse that he never wanted to see her again. And when she tearfully revealed she was pregnant, he said "once a slut, always a slut," and that he didn't care if the child was his.

In the present day, Jesse's managed to clean up her life: she found a steady job and a support network in Spokane, where she's raised her son, Gabe, as a single parent. But Gabe's started asking who his daddy is, and Jesse's vowed never to lie to her son, so she heads back to Seattle to see if she can make things right. When Matt dodges her calls, she shows up in person, with pictures of Gabe, whose resemblance to Matt is worth as much as a paternity test.

Matt, when he discovers the truth, is astonished and outraged. He blames her for intentionally keeping the truth from him. When his nasty alpha-male logic collides with the rather elephantine fact that she did tell him (and he dumped her anyway), he justifies it under the ludicrous notion that she'd told him about the pregnancy at a time when she knew he wouldn't have believed her, and had done so on purpose because she's a devious whore. He immediately plans to destroy her emotionally, the first item on the list being to butter her up with friendship and (false) forgiveness, and the second being to sue for sole custody of Gabe. His first reaction to Gabe is one of total apathy - when his lawyer remarks that if he wins the battle, he'll actually have to take care of the kid, Matt reasons, "That's what nannies and boarding schools are for." Wow, what a sweetheart.

Matt Fenner is the reason I despised this book. I wanted to toss him into a burlap sack and have a gang of meth-crazed hobos beat him with sticks. I wanted him to be hit by a bus. I wanted the real hero to jump out of the bushes and sock Matt in the face.

I did not want him to end up with Jesse. There wasn't a single page of the novel in which I thought Matt was a good partner for Jesse. For the vast majority of the book, he's emotionless, callous, manipulative, vindictive, and malicious. The only thing worse than the first half of the novel, in which he says things about wanting her broken and bleeding by the side of the road, is the second half, in which he starts to actually bond with his son and develops an absurd self-righteousness about all the years he lost because Jesse had "kept" Gabe from him.

Part of my hatred is, surprisingly, thanks to the parts of the book I found enjoyable. As usual, Susan Mallery's female characters are relateable and evocatively written. Jesse, in particular - she was given pretty short shrift in the earlier novels, mainly because I think the author was trying to save her best material for Jesse's own story. Mallery movingly demonstrates, through flashbacks, Jesse's deep-seated insecurities about being the family screw-up, her wonder at finding herself in a steady, loving relationship, and the pervading terror that somehow her party-girl past will destroy her happiness - and that she might deserve to be destroyed. All of this, however, serves to make Matt's actions and intentions towards her all the more appalling.

Thankfully, Jesse's not an idiot this time. When she meets Matt again, although she still harbours feelings for him, she realizes that he's changed, and not necessarily into a nice person. He treats women like objects, he's emotionally walled-off, and is vindictive to a fault. Even through all this, Jesse still tries to repair the damage and reunite father and son, and even makes amends with Matt's mother - now a lonely, sad woman who's also a victim of Matt's selfish power-trip punishments.

The "revenge plot" is not an uncommon one in the romance world - that is, a story in which the hero or heroine initiates a relationship with their significant other for the express purpose of exacting vengeance, only to fall in love with them instead. I'm not too familiar with this type of storyline, but several romance fans have assured me that there are stories in which this type of thing works - mainly because it creates a psychological tug-of-war in the revenge-seaking protagonist between the polar opposites of love and hatred.

However, I felt this plot failed in Sweet Trouble's case because with Matt, there was no build-up of love. He consistently hates Jesse for the majority of the novel, without a sufficient resurgence of romantic feeling to balance it. While Matt acknowledges once or twice that he's still attracted to Jesse, he never considers her feelings or questions the righteousness of the pain he's planning to inflict on her. His Big Realization that he's still in love with Jesse is a Big Realization - precisely because there was no development of positive feelings for her beforehand. It was like flicking on a light switch - one minute, he's "I will destroy her," and the next it's "OH SHIT, GOTTA STOP HER FROM FINDING OUT ABOUT THOSE CUSTODY PAPERS!!"

However, I think what I despised most about this book were the ugly and misogynist undertones concerning Jesse's responsibility towards Matt. Throughout the novel, most of the blame for the five years Gabe spent without a father and Matt spent not knowing his son is placed squarely on Jesse's shoulders. Whenever Matt reflects on the years of "firsts" he missed with his son, he never, not once, at any point in the novel places any of the blame or responsibility for this on himself.

Never once does he reflect on that pivotal moment when he told Jesse that he didn't care if her child was his and derive any feeling of personal culpability for Jesse's exile to Spokane. His complete and one-sided belief in Jesse's total responsibility for their breakup remains unchanged even after he realizes that she never cheated on him. I might have been able to relate to his anger and his loss better if he'd had at least one thought of, "I'm part of the reason Gabe doesn't know me - gee, if only I hadn't lost my temper," but this never happens. I'm not saying that Matt should take all of the blame for their breakup, but he bears at least part of the responsibility. In the novel's flashbacks, a lovestruck Matt swore to Jesse that he'd never let her past affect their future, but when his vow was actually tested he broke it. The novel never dwells on this, Matt's most telling contribution to Jesse's flight to Spokane, nor acknowledges any part of his betrayal of her.

What's worse, is that even the other characters begin to think this way, too - Jesse's exile to Spokane is seen as a "mistake," yet another example of her irresponsibility and flightiness. If she'd only stayed, and waited for Matt to get over his pathetic man-boy insecurities, this could have all turned out fine. The only voice of reason seems to be Jesse herself, who believes that those five years in Spokane turned her into a better person and kept her from reverting to her screwup ways, and that Matt ultimately failed in his promise to love her despite her past.

And that's what it comes down to in Sweet Trouble - Jesse's slutty past. If she hadn't been such a whore, Nicole wouldn't have thought she'd slept with her husband. If Jesse had been a good little girl, Matt would have believed her and married her and lived happily ever after. If Jesse had obeyed society's rules, Gabe would have grown up with a father and society's happy natural order would have prevailed. The appalling connotations of this book, that Jesse's breakup with Matt, and the absence of Gabe in Matt's life, are ultimately consqeuences of Jesse being a floozy, are hideous.

Jesse, at least, proves to be a strong character who resists this bullshit for the majority of the book, but ultimately she gives in at the end, because Rat-Bastard Matt is inexplicably the hero of this piece. I closed this book after reading the last page with a mixture of rage and, yes, sadness. Rage that books are still being written that tout pathetic, abusive, self-involved and hypocritical males as the romantic ideal, and sadness, because after reading all three books in Mallery's Bakery Sisters Trilogy, I thought Jesse deserved better. F.
Posted by AnimeJune at Friday, September 12, 2008