"The Viscount Who Loved Me," by Julia Quinn 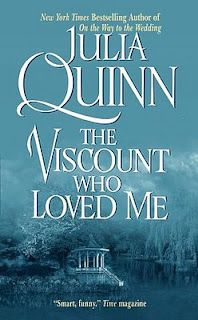 The Chick: Kate Sheffield. Thanks to her family's strained finances, she has to share her first season at the advanced age of twenty-one with her seventeen-year-old half-sister Edwina. Knowing Edwina, the more conventionally pretty one, is the more likely of the two to make an advantageous match, Kate makes it her duty to make sure Edwina doesn't fall for a cad.
The Rub: Years of living in Edwina's sparkling, gorgeous shadow have left Kate with an overdeveloped sense of her own unattractiveness. Is also irrationally terrified of thunderstorms.
The Dreamcast: Nora Zehetner, a.k.a. "Eden" from Heroes. She looks to be just the right match of pretty and pert to play the saucy Kate.

The Dude: Viscount Anthony Bridgerton. The eldest of the eight Bridgerton siblings, he lives a rakish existence but still takes his duties as head of the family very seriously, ever since his father died unexpectedly of anaphylactic shock from a bee sting when Anthony was eighteen.
The Rub: He worshipped his father to such an extent that his father's sudden death at the age of 38 convinced Anthony that, just as he supposedly can't measure up to all of his father's other accomplishments, he won't be able to surpass his dad's lifespan either, so he lives life as if his days were already numbered. Is also terrified (albeit a little more understandably) of bees.
The Dreamcast: Firefly's Sean Maher.

Anthony: I need a wife.

Anthony: NOO! MUST SUCK OUT VENOM!

Anthony: Yeah, well, that's what? Eight years? Not too bad.

Anthony: SHIT. We could have had EIGHT years!

2 Cameos from Characters from Previous Quinn Novels (Simon and Daphne!)

1 Game of Pall Mall (croquet) Involving the Mallet of Death

The Word: The second in the Bridgerton family series of romance novels by Julia Quinn, this one involves Anthony, Daphne's oldest brother who appeared in The Duke & I for almost the sole purpose of punching Simon in the face. This review is rather spoiler-heavy, so you've been warned.

Now, of course, he gets his own story. Anthony, the eldest Bridgerton, was the one who was the hardest hit when the children's father died from a sudden allergic reaction to a bee sting. At eighteen, Anthony was on the cusp of manhood already, while his brothers were sixteen, twelve, and two - and the youngest Bridgerton (Hyacinth) not even born yet. He shared a special relationship with his father and was devasted when he collapsed from a simple bee sting in the prime of his life.

The interesting thing here is that while modern readers will know it was an allergic reaction, realistically Julia Quinn uses the Regency-era ignorance of fatal allergies to create an interesting plot element. Anthony emerges from the tragedy of his father's death with the unshakeable conviction that his days, too, are numbered. In Anthony's eyes, if a man as exalted, accomplished, and unshakeable as his magnificent father could be felled by a mere bee at the age of thirty-eight, than his struggling son certainly can't last much longer.

At the novel's start, he's spent the last ten years living scandalously, all the while still maintaining his duties and responsibilities to his large family. However, as his biological clock keeps ticking towards his imagined endpoint, he decides to settle down to meet yet another duty as Viscount: marry and beget an heir. He really has only three qualities the future Viscountess must meet: 1) She must be reasonably pretty. 2) She must be reasonably intelligent. And 3), she must not be a love match. Really, Anthony reasons, it's better for both of them if neither of them loves the other, because it will only make it more painful when he meets his inevitable early fate.

He settles his eye on Edwina Sheffield, the impoverished but ravishingly lovely star of this year's Season. She's more than pretty, she likes to read, and there's no emotional spark between them. To Anthony, this is perfect, except for one small detail: Edwina refuses to consider any suitor who doesn't meet her older sister's approval. There, Anthony meets a brick wall.

Kate Sheffield's heard plenty about Anthony's rakish ways in the local gossip papers, and is not so easily charmed by Anthony. Far from being a sharp-tongued harridan, Kate is a rather enjoyable and sympathetic character. She's used to being the "other sister," and always unfavourably compared to Edwina. While jealousy's never been an issue since Edwina is thankfully a bubbly and caring person, Kate has convinced herself that no one could possibly notice her if Edwina were in the room as well, and resigns herself to the fate of seeing Edwina married off well so that Kate and her stepmother may live above the genteel poverty line.

She's already suspicious when Anthony approaches her to gain the required approval, and when Anthony tosses off a thoughtless compliment ("you're as lovely as your sister"), Kate immediately pegs him for a dishonest, caddish flatterer - the last kind of man she wants her sister to associate with. Of course, Anthony refuses to be disuaded and rises to the challenge.
I enjoyed this novel very much. At first, I was a little unsettled, because the narrative and obstacle structure of The Viscount Who Loved Me seemed almost identical to that of The Duke & I. Man whose relationship decisions are essentially decided for him by his now-deceased father fights his wrong attraction to a wrong woman, until he and she are compromised into a marriage, where his dark secret problems are confronted and eventually solved in the fourth quarter of the novel.

However, I thought the obstacles and personal problems of Anthony and Kate to be more believable than those of Simon and Daphne, so I felt the structure suited their story more. Simon's refusal to have children in order to spite his dead father came across as rather childish and disturbing and a little exaggerated. Daphne, herself, didn't have any real problems other than the fact that she was a bit too nice.

In The Viscount Who Loved Me, however, both character have realistic foibles that are complemented and eased by their partners. Anthony is terrified of falling in love because ignoring permanent attachments to people has been the only thing keeping him from fearing his early demise. Kate, meanwhile, has to struggle with the nature of their marriage - Kate, stung by a bee, is compromised when a horrified Anthony tries to manually suck out the venom to save her life. The bee stung her on the chest. You can work out the rest of the details yourself. However, while Kate is secretly thrilled to be married to Anthony, she despairs over "trapping" Anthony, hates considering herself to be the second choice, and fears that Anthony's really thinking of someone else when he makes love to her.

Kate is afraid that Anthony doesn't love her. Anthony is afraid that he does. The theme of fears and phobias (Kate is also afraid of storms, as Anthony is of bees) adds an excellent layer to a novel about two people who, to escape their deepest fears, have constructed facades and personalities in order to protect themselves. Anthony arranges his life around his belief that he won't reach his 38th birthday and lives as an emotionally unattached rake, Kate prepares herself for a life of spinsterhood and devotes her life to her sister as she believes she'll never have one of her own. I don't know, but living a life controlled by fear always came across to me as more relatable than living a life controlled by spite.

Despite the similarities in story structure, I quite enjoyed the interactions between the hero and heroine much more in The Viscount Who Loved Me, and how each became a better, less afraid person around the other.
A-
Posted by AnimeJune at Monday, September 01, 2008