"A Dance with Dragons," by George R. R. Martin 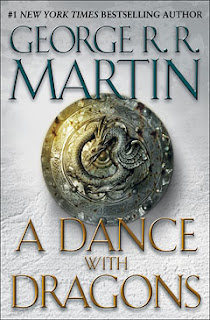 I'd like to think this goes without saying, but I might as well mention it just in case - if you are a fan of the HBO series Game of Thrones, this book is FULL OF SPOILERS. Season 5 spoilers, yes, but spoilers all the same. I highly recommend you read the books anyway rather than wait five years, but still - SPOILERS! YOU'VE BEEN WARNED!

Tyrion Lannister: Brother to a queen, uncle to a king, and The Reason You Waited Five Years For This Book, now this clever dwarf is a fugitive on the run from several crimes, a few of which he actually committed.

Daenerys Targaryen: Thanks to her gumption, her dragons, and an army of freed slaves, she captured the free city of Meereen and abolished its cruel slave trade - but how long can she hold onto it?

Arya Stark, a.k.a. "No one": Last seen being trained in the art of being a holy assassin, Ned Stark's tomboyish daughter is about to take the ultimate Final Exam.

Bran Stark: Fleeing into the woods with a motley band of companions, Bran's only hope is to find the source of his visions of a three-eyed crow - which might just be a wizard or magic-user powerful enough to restore the use of his legs.

Cersei Lannister: The evil sex-crazed murderous incestuous queen who finally gets what she deserves!

Quentyn Martell: A young Dornish prince on a secret mission to capture Daenerys' hand in marriage.

Griff: This knight, disinherited and banished from Westeros, gave up his livelihood to protect a secret heir to the throne - whose day has finally come.

Ser Barristan Selmy: An elderly knight who has sworn himself to Daenerys' service after being cast out of the Kingsguard in Westeros.

Reek: The traitor formerly known as Theon Greyjoy, this tormented pet of a masochistic lord has endured years of torture only to be released as a pawn in a dangerous game.

The Word: I can still remember when the book right before this one in the Song of Ice and Fire series came out. I remember waiting in line at Greenwoods' books to have George R. R. Martin sign it.

Ah, the halcyon days of 2005. Yes, it's been one long-ass wait for the latest book in this densely-plotted, irresistibly dramatic fantasy series. And is it worth it?

While, like the other books in this series, this novel juggles about a dozen plotlines all told, the three main ones concern the characters left out of A Feast for Crows - Tyrion Lannister, Daenerys Targaryan, and Jon Snow. People who have this read this book and are now reading this review (for whatever reason), I apologize in advance for not mentioning your particular favourite character/plotline, but there are dozens and hundreds of them and I want this review to clock in under a million words.

Anyway, Tyrion Lannister is now on the lam for the murder of his nephew, Joffrey (which wasn't his fault) and his father, Tywin (which actually was). Still reeling from his father's revelation that the love of Tyrion's life actually had loved him (and wasn't a prostitute as his father and brother Jaime had both assured him), Tyrion finds shelter with a band of rebels harbouring an enormous secret that could seriously affect the line of succession. Tyrion, now seeking vengeance against his crazed sister Queen Cersei and his lying brother Jaime, is all too willing to participate in anything that will blow over their house of royal cards. Still, as much as he wants to convince himself (and others) that he's a completely amoral, selfish Imp - there's an undercurrent of compassion, wit, and plain human decency to him that's the main reason why Tyrion is the most popular character of the series.

Meanwhile, up at the Wall that protects the Seven Kingdoms from the ravages of the north, Jon Snow has been voted Lord Commander of the Night's Watch, i.e. The Most Difficult and Unwanted Position in Existence. Much like the author himself, Jon is forced to juggle a number of demanding problems and characters while keeping everyone satisfied. His ultimate goal is to keep the Wall defended, but it's against what that is the real problem. Everyone agrees that the wights (horrifying re-animated corpses who nearly stormed the Wall in the previous books) must been driven back, but many of Jon's men disagree with Jon's decision to try and ally with the wildlings - clans of humans who live in the lawless north who also nearly stormed the Wall. On top of that, Jon has offered shelter to rebel King Stannis but must also struggle to maintain the Watch's traditional neutrality in political affairs.

Across the Narrow Sea, Daenerys has crowned herself Queen of Meereen, a bloodthirsty slave-port brought to its knees with the might of her dragons and an army of freed, adoring slaves. However, her reign is anything but stable. Her rejection of the slave trade has earned her the enmity of the neighbouring city-states, as well as violently conservative factions within her own walls. To top it all off, her dragons are becoming larger and more unstable, and when one of them is accused of hunting The Most Dangerous Game, Daenerys may well be forced to take her three most valued assets off the table.

Of these three major plotlines, Daenerys' is probably the most prominent. Her conquest of Meereen made serious waves, and several of the smaller plotlines delve into the lives of people who seek to kill, ally themselves with, or marry her (particularly this last one - no fewer than four characters seek Daenerys' hand).

But, really, there are dozens of stories, both major and minor, going on in this jam-packed novel. I recently read an article in Entertainment Weekly that compared George R. R. Martin to Tolkien, and I've never found that comparison more accurate than while I was reading this book. A Dance with Dragons' biggest weakness is its pacing - despite the book's 1000+ pages, the surplus of characters, subplots, and description means that no storyline (even the Three Major Ones) gets very much done in the larger span of things.

Like The Lord of the Rings, however, what this book lacks for in narrative momentum it makes up for in scope. A cast of thousands. A wide-spanning world, each corner of which has its own unique cultures and traditions. Three different religions (at least!). A Dance of Dragons is like the world's most glorious and colourful travel book - so even if the story isn't moving too quickly, you don't really mind because it gives you time to look around.

Yes, the pacing can be slow, but the writing is stellar, the characters are vivid, the morals are grey and blurred (just how I like 'em), the punches are un-pulled, and the scope is epic. On its own, A Dance of Dragons does shift to the bloated and unwieldy side, but as an addition to A Song of Ice and Fire it serves its purpose admirably.
A-
Posted by AnimeJune at Monday, August 22, 2011