"Then He Kissed Me," by Christine Ridgway 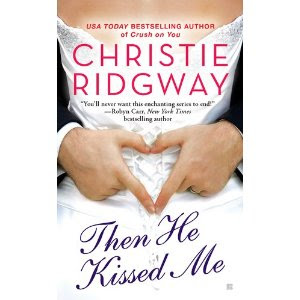 The Chick: Stefania "Stevie" Baci. When her younger sister Alessandra breaks her ankle, the middle Baci sister is roped into helping with the family winery's growing wedding business.
The Rub: Too bad this involves arranging the wedding of her recent ex-boyfriend and the beautiful blond princess he dumped her for. Dream Casting: Michelle Monaghan.

The Dude: Prince Jacques Christian Wilhelm Parini - a.k.a. "Jack." Here to celebrate his sister's wedding, when he hears that his soon-to-be brother-in-law's ex is hosting the affair, he decides he needs to pay special attention to her to prevent any sabotage of his sister's perfect day.
The Rub: His interest quickly begins to get too personal - but he's got too much baggage to lay at any woman's feet. Dream Casting: Zachary Quinto.

Stevie: Gah! I have to chauffeur my own ex and his new fiancee on New Yorks Eve! What could be worse?

Stevie's Sisters: You have to arrange their wedding!

Jack: Hey! I'm a prince and can be both romantic and sleezy in five different languages! Don't fuck up my sister's wedding!

Stevie: I find you unsettlingly attractive, but as long as we don't end up in a fake engagement, we should be good.

Jack: I don't understand what's happening. I have a past. I'm afraid of the dark. And my sister stole your boyfriend. We shouldn't be together!

Jack: OH CRAP THE CONDOM BROKE YOU'RE PREGNANT WE GOTTA GET MARRIED I'M SO FREAKIN HAPPY ... I mean, *cough* you should get tested.

Jack: Yeah, I'm kind of in love with you.

The Word: As the second book in Christie Ridgway's trilogy concerning three sisters and their struggling family winery, I enjoyed Then He Kissed Me far more than Crush On You.

Mainly because Stevie has much greater emotional impulse control than her sister Allie.

Which is a good thing, as the story begins when Stevie is talked/coerced/emotionally blackmailed into helping out with the family winery's wedding business, a relatively new venture designed to save the Tanti Baci winery from certain bankruptcy. Unfortunately, the first wedding on the docket is none other than that of Emerson Platt (her recent ex-boyfriend who callously dumped her) and Roxanne Parini (the blond princess he callously dumped Stevie for). Awwwwwkard.

While Stevie violently objects, she has little choice - her younger sister Allie broke her ankle, and her older sister is too busy running the other aspects of the winery in between acting angsty and provoking Man Fights between the two men who shall no doubt be competing for her hand in Book Three. Stevie, since her limousine service is only part-time, is the only one able to handle the job, and without the boost of their wedding service, the family winery faces certain bankruptcy.

To further complicate things, Everyone is Aware of the Intense Awkwardness of the situation - including the bride-to-be's brother, Prince Jacques of Ardenia, commonly known as Jack Parini. He and his little sister Roxy (the children of the King's second, American wife) went through a traumatic experience in their teens, and he's determined to protect her from any more pain and humiliation. The idea of a possibly jealous and bitter ex-girlfriend arranging his sister's wedding sets off every alarm bell he has, so he decides to be "the fly in her ointment, the thorn on her rose" to make sure everything goes according to plan.

As is common in Ridgway novels, there are lots of surprising character layers, a touch of darkness, and many surprises. Instead of vilifying Emerson as the weakhearted, wrongheaded, public-image-conscious cheating ex-boyfriend - Ridgeway gives him some unconventional characterization as well as a positive secondary romance with Roxy, who has some serious issues of her own to deal with.

And Jack is an interesting character - he has a reputation worse than Prince Harry's. As teens, he and his sister Roxy were kidnapped and held for ransom - but the vicious rumour that he somehow conspired with the kidnappers never died down, and instead cut Jack off from his family, kept him from taking life too seriously and kept him from making any deep emotional bonds. He's a character so used to bad press that he's started to buy into it himself.

As for Stevie, I quite enjoyed her. Yes, she's a tomboy in the sense that she's comfortable joshing around with men, but she's not too overbearingly I Don't Need a Man to ask for help from one when she needs it. Her issues are milder - mainly stemming from her recent break up, and on a deeper level, being an isolated middle child and the fractious relationship she remembers having with her mother before she died. All of this was handled pretty well (except for a Miraculous Motherly Revelation at the end that seemed too contrived to be real).

That being said, something didn't quite "gel" enough in this story to make me give it an A grade. Part of it is the curse of reviewing books from a backlog (I read this one more than a month ago), but part of it is that I was never really sure what each romantic protagonist ultimately offered the other that helped them both towards an HEA. I could see the attraction, I could see how each overcame their own issues, but looking back on it, I honestly can't remember what it was about their relationship that made it special, that made it The One. Frankly, I remember Emerson and Roxy's romance subplot more than theirs.

Still a worthy, romantic read.
B.
Posted by AnimeJune at Sunday, August 07, 2011