"To Ruin the Duke," by Debra Mullins 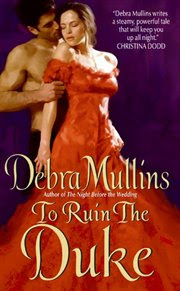 The Chick: Miranda Fontaine. When her friend Lettie dies in childbirth, Miranda swears she'll do right by the child, James, and ensure his noble father doesn't abandon him like hers did.
The Rub: When Wyldehaven swears the child isn't his, she's forced to think of other options to gain income for herself and the child - and now suddenly Wyldehaven's interested. Dream Casting: Hayley Atwell.

The Dude: Thornton Matherton, Duke of Wyldehaven, a.k.a. "Wylde." Determined to do away with his father's scandalous memory, Wylde's lived a proper and upstanding life - until an imposter starts committing offenses and blaming them on him - including fathering an illegitimate child a mysterious woman insists he claim as his own.
The Rub: This very woman makes him feel more alive than he has in years - but can he trust a woman whose background is so common and sketchy? Dream Casting: Benedict Cumberbatch.

Wylde: Damn and blast it! An imposter is ruining my reputation and being a general ass to everyone!

Miranda: You break it, you bought it, my lord! *hands over baby*

Wylde: But it wasn't me! It was my Evil Twin!

Miranda: LOL, are you for real?

Wylde's Dude Friends: Yes, he is!

Wylde: The kiiiiid is NOT my SON!

Miranda: Well that sucks. Guess I'll become an Italian Opera Singer then, since it's so easy and all.

Wylde: You look just like Miranda! Do you have an Evil Twin, too?

Wylde: You mean you *gasp* sing in *double gasp* public for *le gasp!* MONEY?! Clearly you are an untrustworthy whore!

Miranda: God I hope the baby doesn't turn out as stupid as you.

Wylde: I not-so-secretly want to have sex with you, but you won't let me put on the moves. If only a plot device could help me!

Wylde: YESSSS. We can have sleep overs and eat s'mores and have wild untamed just-for-tonight sex!

Wylde: Wow, now I totally want to marry you and love you and give you legitimate babies and shower you with money and affection.

Wylde's Evil Twin: Look at me! I'm evil! I hurt babies and look like Wylde!

Miranda: Huh. They do exist.

Wylde: Not for long! *kills Evil Twin* Oh, and the manly righteous action of murder in self-defense has cured my fear of babies! Let's have lots!

The Word: Romance is a crazy genre in a lot of ways. We have secret pasts and dead spouses, lies and phobias and general angst. And somehow in the midst of all this, our characters have to fall in love and make us believe it.

To Ruin The Duke, plot-wise, has an Overheaping Spoonful of Crazy, and while this plot is coupled with protagonists blessed with Surprisingly Bountiful Reserves of Good Sense, the result is, unfortunately, shallow, bland, and a little silly.

Thornton Matherton, Duke of Wyldehaven a.k.a. "Wylde" - has returned to London for the funeral of a close friend, and discovers that someone who bears a striking resemblance to him has been using his name and reputation to get away with beating hookers, running up debts, and cheating at cards.

Thornton has missed most of the fun because he's been in the country mourning his dead (and Evil) wife, but now that he's back, he's determined to find this imposter before he does anymore damage, and he enlists his completely useless Dudegroup of Dudes to help him. Since his Dudegroup of Dudes formed in school in order to fight bullies and read Beowulf (don't ask), they are completely out of their element, since finding an imposter can't be solved by a) running and telling a teacher or b) quoting Beowulf.

Enter our heroine, Miranda, who shows up at Wylde's door to demand he take responsibility for childbirthing her best friend to death. Her friend, before passing into the Great Beyond, made Miranda swear she would do right by her newborn son James and ensure his father raised him as befits a son of a Duke.

Wylde's denial that the baby is his holds very little water with her. The illegitimate daughter of an actress who turned to prostitution, the inexplicably genteely-raised Miranda knows all about the Evils of Man. However, not really having any Plan B when Wylde continues to deny paternity, she lets an old friend of her mother's convince her to pose as a famous Italian opera singer to sing at parties for enough cash to raise James on her own.

Apparently this works, despite the fact that Miranda doesn't speak Italian.

And apparently Miranda can sing opera and play the piano like a star, despite there being no set-up to this aspect of her character at all.

But this is a book about Secret Babies and Evil Twins, after all. Our hopes are already suspended fairly high above our heads.

And of course, Wylde spots Miranda singing under a false name and his Evil Wimmin Alarm goes off (see: Evil Dead Wife). They proceed to spit and bite and flirt with each other, until a Plot Device conveniently forces Miranda and baby James into Wylde's home, where Wylde's Distrust of Deceitful Women is briefly upstaged by his Fear of Babies (see: Evil Dead Pregnant Wife).

On the plus side for this novel, both Wylde and Miranda are, rather surprisingly given the melodramatic elements of this novel, quite sensible characters. Miranda has perfectly good reasons to suspect Wylde of fathering James (1: there are witnesses, 2: an Evil Twin is the lamest excuse in the world) and knows exactly what sheltering under Wylde's protection might and probably will entail (explaining why she initially resists the arrangement until a violent Plot Device forces her to do otherwise). Miranda is a very open-eyed character - she seems to know exactly what she's in for and whether or not she should do it.

However, the ultimate negative which pushes this novel down out of Enjoyably Crazy territory is that these characters, for all their preternatural common sense, are very shallowly drawn with no real depth or proper backstory, Miranda in particular. She lived in a tavern with a mother who was a whore, and yet somehow acquired extensive lessons in classical music, singing, deportment, and speech. Her childhood and upbringing are very sketchily established and didn't ring true, and "surprising" aspects of her backstory will suddenly appear, with little to no set-up, in order to conveniently help along a thorny Plot Device - such as her decision to become an Italian opera singer. Nothing about her character up to this point mentions music, singing, or an interest in either until her mother's friend suggests she sing - and then suddenly she's awesome at it and "suddenly" remembers her mother "somehow" managing to get lessons for it.

It's the same with Wyldehaven - he apparently had a father with a scandalous reputation (to the point where bastards and by-blows are dropping by for hand-outs every other week), which is meant to explain why he's such a stickler for propriety and dislikes how this imposter is resurrecting his father's memory. And yet, Wyldehaven himself never discusses why his father's reputation bothered him, and his mother gets mentioned in one line and then never brought up again. Whenever I considered these characters' actions and motivations and tried to tie them up with what I know of their pasts and upbringing, I kept coming up with question marks.

Similarly, the plot's quick descent into Total Crazy (an Evil Twin Gunfight, a Secret Dad, a Thieving Friend, a Traitor Friend, a Secret Murderous Sister) further kept me from enjoying the novel. I can tolerate (and often quite enjoy) novels with Crazy elements so long as they have well-developed and interesting characters - because then it's fun to watch them react and deal with the Crazy, and learn more about themselves in the process. With characters as flimsy and unattached as Wylde and Miranda, the plot bats them about like a cat with a ball of yarn, and I had little to no emotional investment in any of it.
C+
Posted by AnimeJune at Sunday, August 28, 2011