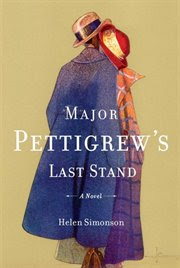 Our Protagonist: Major Ernest Pettigrew. A quiet, staunch English villager, he's a man who enjoys tradition and the smooth beaten path - until he wanders off it, big time, when he develops a friendship with Mrs. Ali, the Pakistani owner of the village shop.
The Rub: Stupidity knows no race or geographical boundary - and the Major runs into a lot of it when his friendship with Mrs. Ali starts to possibly blossom into something more.

Mrs. Jasmina Ali: The widowed owner of the village shop who helps the Major deal with his grief over his brother's death. Loves reading and soaking up knowledge, but must deal with societal pressures from her traditional Muslim in-laws.

Amina: A young single mother who befriends Mrs. Ali and the Major.

Roger Pettigrew: The Major's self-absorbed and ambitious son who's gotten engaged to a sophisticated American, but has no real plans for marriage.

Grace DeVere: The village spinster, mutual friend to both the Major and Mrs. Ali.

The Word: If I had to list two settings I love to read about, practically heedless of whatever the plot involves, it would have to be small towns and Britain. I'm an Anglophile - love the books, the TV, the architecture, the history, the music. But I also love stories that take place in insular, small settings with strong communities - where a whisper in one ear travels to every other's in the span of a Sunday afternoon.

So I was fully expecting Major Pettigrew's Last Stand to be my crack, to become one of those books that I bury myself in, dead to the rest of the world until I emerge.

Well, not quite - but it was still a pleasant, substantial read. One that I enjoyed while I was reading, that also had me thinking afterwards.

Major Ernest Pettigrew, a deeply-rooted inhabitant of the picturesque English village Edgecombe St. Mary, has his structured and orderly life upended when he learns of the sudden death of his younger brother Bertie. Half of his mind copes by considering the problem of what to do with his brother's shotgun, one of a matching set of family heirlooms bequeathed to the brothers by their father. While the Major just wants to reunite the pair, Bertie didn't officially bequeath it to him - and the prospect of selling the guns for a small fortune brings all sorts of family members out of the woodwork.

The other half of his mind reaches out for comfort and finds it from a surprising source: Mrs. Ali, the widowed owner of the village shop. Warm, compassionate, insightful, and intellectual, Mrs. Ali surprises and delights the Major, and they start spending more time together, bonding over Rudyard Kipling, roses, and tea. However, the insidious antagonists of pride and bigotry (both from the Major's family and white neighbours and Mrs. Ali's own relatives) strive to keep them apart.

The novel focuses on setting and character more than plot - because Major Pettigrew is, structurally and narratively, a romance (*gasp!*). But I don't think the novel would have worked any other way, for without a singular character like the Major, none of the subplots about real estate, pushy Americans, grasping sons and familial politics would be nearly as interesting.

Major Pettigrew is a fascinating character because he's so old-fashioned that you'd almost never expect this story to happen to him. He's a great believer in The Good Old Days - he lives for tea, tradition, hunting, classic British literature, the right of primogenitor, and untamed English countryside. The book is told entirely from his point of view, with loving descriptions of the fields behind his house and of the tea cups his wife Nancy cherished, as well as passages fraught with disgust and horror at the garish crisp-wrapper-strewn landscapes of more modernized towns and lifestyles.

Yet at the same time, the Major is like the embodiment of idealized Good Old Days - the Major extends politeness and friendship (and eventually, more) to Mrs. Ali almost without even considering her race or religion. While characters who advocate Modernity (such as the Major's cluelessly ambitious son Roger) are vilified in this book, so are the characters who espouse (or appear to) the appeal of the Traditional English Village, but to whom Traditional English means "white." Their racism is all the more potent and painful to read because more than half of it is unintentional.

But the Major isn't perfect either - it's easy to see it that way when he's the major voice in the story, but from time to time Helen Simonson does give us tantalizing glimpses that show us how the Major's adherence to old-fashioned notions of inheritance and behaviour may have strained his relationships with his brother Bertie and his son Roger.

But mostly the Major is delightful - a lonely figure of common sense who must tight-rope walk between the old and new to discover that certain rules of decency, compassion and love don't alter with age.
A-
Posted by AnimeJune at Tuesday, September 06, 2011