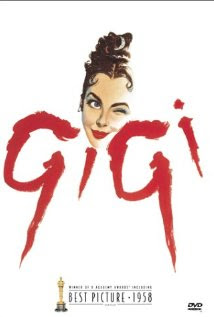 This is a story about a man who falls in love with a (possibly underage) prostitute. Almost. Sort of.

Let me back up and explain. My plans for today were derailed by a shopping trip spent with my Mum (an awesome individual) that ended with us watching one of the old movies I'd bought on a whim - the 1958 best picture winner, Gigi.

And boy is this movie alternately funny and creepy to watch in a modern context. Enough to warrant one of my rare and spontaneous film reviews.

The lovely teenage girl of the title (played by Leslie Caron) is the daughter of a flighty fourth-rate opera singer who has been raised by her grandmother Madame Alvarez (Hermione Gringold) and her great-aunt Alicia (Isabel Jeans). What the film plays coy with for much of its running time is the fact that both Madame Alvarez and Aunt Alicia are retired courtesans who have been training Gigi to follow in their footsteps - although most of their lessons seem to involve table manners, how to eat tiny birds and cold lobster, and maintaining a firm grip on the saucer when pouring a cup of coffee.

But instead of this being creepy and appalling, it is instead romantic because they are French and this takes place in France.

But you see, he is charming and not at all a cradle-robbing pedophile because he is French and the French are shameless romantics. In France.

The movie actually opens with Gaston le boo-hooing over his rich white boy problems about how bored he is with all his money and material comforts. The only people he's not bored with are Gigi and Madame Alvarez, whom he visits on a regular basis - he apparently knows them because Madame Alvarez and Gaston's Uncle Poonhound used to bone back when she was Not Old. He enjoys Madame Alvarez's company (only in the platonic sense - because she is Hella Old) and he treats Gigi fondly like a beloved pet - playing cards with her, regaling her with stories, and bringing her sweets from his travels.

His pride is dealt a blow, however, when he takes his current mistress (played delightfully by Eva Gabor) out on a date and realizes (in song, naturally) that she's fallen in love with someone else and is no longer bestowing her amply-paid-for-charms upon him with the same skill as before. Even worse, she's in love with a low-class skating instructor! He revenges himself by paying her lover 1000 francs to le scram and dumping her in a humiliatingly public fashion, prompting her to commit suicide ("Your first suicide!" croons Uncle Poonhound proudly).

Of course this is hilarious and not offensively callous because this is Eva Gabor's fourth "suicide," which seems to involve taking just enough poison to make her sick enough to elicit sympathy but not enough to actually kill her. Because the French! They are just so French! And so crazily romantic!

Meanwhile, Gaston's Overabundant Male Ego won't let him lick his wounds and admit to the public that he's been thrown over, so he simply has to throw amazing parties, date dozens of ladies, and engage in debauched revelry in order to keep society from turning him into a laughingstock. But you see, Poor Little Rich Boy is just so bored with his Poor Little Rich Life that in between Wealthy Douchebag Gigs, he crawls over to Madame Alvarez' to whine and bitch and play cards with the charming Gigi.

Things change when Gaston decides to spend the weekend by the seaside in Toulouse and agrees to take Gigi and Madame Alvarez with him. Gigi and Gaston have a grand old time, which doesn't go unnoticed - either by the general public or Madame Alvarez (who gets a lovely musical number with Uncle Poonhound about How They Used To Bone). While Gaston continues on by himself to Monte Carlo, Madame Alvarez and Aunt Alicia decide to take advantage of the rumours swirling around about Gaston and Gigi by speeding up Gigi's Ho Training, hoping that by the time Gaston returns, he'll have a ready-made Virgin Mistress standing by.

Unfortunately, Gaston comes home to find a newly Sexified Gigi and freaks out when he realizes his coltish pet has boobs. Moreover, Gigi's Retired Ho Guardians declare that as a man with his reputation, he can no longer take Gigi out unchaperoned - unless he makes a certain offer. Realizing he can no longer get his underaged milk for free but must buy his newly-adult cow, he storms off in a huff and complains about how Life is Unfair and how Unattractive Gigi is. But the Healing Power of Song reminds him that Gigi has boobs now, he realizes he's in love with her, and he goes back to make an offer to the Retired Ho Guardians.

So up until this point, the movie is fluffy and enjoyable and full of flamboyant hats - provided you can turn your brain off and ignore that the story is actually about a teenager being trained to be a courtesan and that the man who's known her since she was a child is now going to buy her.

But let us not forget that this movie is French! The characters are French and the setting is French and the lifestyle is French and the French are just so irresistibly and scandalously and un-Americanly passionate! Up until this point, the movie executes a lot of smoke and mirrors and emphasizes the foreign setting, characters, and culture to get a 1958 American audience to excuse, ignore, or mistake the plot of prostitution.

Moreover, the characters do this as well. They frequently talk about the perks and the romantic aspects of their profession. The jewels and the moonlit nights and the fancy dinners and the attention.

But then the movie surprised me. Gaston brings his offer to Madame Alvarez and Aunt Alicia, and they break the news to Gigi, and then Gaston meets Gigi and offers to "take care of her." This movie is all about the euphemisms, and being coy, and playing up the public face of being a courtesan (the fashionable, romantic aspect) rather than the private face (the sexual aspect).

But then Gigi refuses Gaston's offer. "When say you want to take care of me, you mean you want me in your bed," she says. In one line, she cuts through all movie's hypocritical romantic bullshit and shifts the entire paradigm of her character.

Moreover, when Gaston replies that he wants to make her his mistress because he's in love with her, she flies into a tearful rage, demanding that if Gaston loved her, how could he offer her this lifestyle, with all of its accompanying shame and heartbreak? How could he be so horrible?

All we've seen of Gigi up until this point of the movie is a young, innocent girl who's been trained in dance, table manners, how to roll cigars (a more Freudian task you'll never see) and the arts of romance. She never gives any indication that she understands what she's really being trained for, but in that one scene, you realize that this lively, bubbly character understands all too well what she's been trained for, what the unspoken realistic consequences of such a lifestyle are, and that she no longer wants to do that. With that one powerful scene, Gigi bursts the movie's musical technicolour bubble.

Gaston, prince that he is, flounces out, outraged at Gigi's "lack of romance" (how dare she refer to his intention to pay for her romantic and sexual favours as prostitution! How vulgar!) and he's convinced it's just a plot to secure better terms. But then Gigi sends Gaston an apologetic note agreeing to be his mistress, explaining that she'd rather be miserable with him than without him.

It all stinks a little too much of a romantic cop-out, until he takes her out to dinner and she flawlessly rolls his cigar, makes poisonously catty remarks about poorer courtesans, coos over the emerald bracelet he's bought her and flaunts it for everyone to see - just like every other mistress he's ever had. A classic case of "you get what you pay for." Uncle Poonhound shows up to seal the deal by commenting that Gigi as a mistress "could keep your entertained for months!" Horrified, Gaston drags a sobbing Gigi back to her Retired Ho Guardians and leaves in order to Think Deep Thoughts Set To Significant Musical Accompaniment. He then returns and asks for Gigi's hand in marriage and all is right with the world.

Yeah, Gigi is an interesting and entertaining movie in many ways but Gaston can go and jump off the Eiffel Tower, thank you very much. He's a repulsive individual, a classic Duke of Slut character with all the money and power in the world who nevertheless whines about How Life Is So Boring and Difficult - even when he's visiting Madame Alvarez and Gigi, who have barely enough to live on as it is.

His botched affair with Eva Gabor's character is a clear example of how money can buy you a sexy horse but it won't make her drink. He can buy her attention but he can't buy her love and it offends him on a deeply personal level when he discovers she's in love with a skating instructor - not because she's cheating on him, but because she has the gall to fall in love with someone poor and lower class over the wealthy protector who's paying all her bills. He's outraged that he cannot control that and so he burns her and humiliates her.

I loved that Gigi had the stones to stand up to him. The refusal scene saves this entire movie and gives it a depth and resonance I appreciated. I also enjoyed how her "capitulation" to Gaston served to demonstrate how everything Gaston thinks he wants is wrong. I loved how she finally showed Gaston that if he insists on controlling everything in his life according to his own rigid personal tastes, of course he's going to be bored because everything is going to be the same.

And that's how I came to actually appreciate why the movie used prostitution as a plot device - because prostitution is a form of "controlled" love. Gaston uses mistresses and courtesans because it's a form of love and romance he believes he can own and control. However, it isn't really love, but only a cheap, pretty surface gloss that covers falsehood, greed, and desperation - much like the movie itself, which uses flamboyant costumes, lavish sets, and chirpy songs to mask the fact that Gigi's being trained as a courtesan because she doesn't have many other options (her father is never mentioned, and her mother is a floozy opera singer too concerned with her failing career to take care of her daughter or even appear on-screen).

In order for Gaston to achieve "true" happiness and romance, he must accept Gigi for who she is by marrying her, not by purchasing her. I quite enjoyed that aspect.

Yes, some aspects of the movie are still creepy from a modern context, like Uncle Poonhound's bon-mots and Gigi's age - it's never mentioned how old she is, but she's often dressed in a schoolgirl uniform and unbound hair to look about 15 or 16. But the music is cute, the costumes are amazing, and Gigi is a terrific character (if you can ignore how she ultimately ends up with a toad instead of a prince) who, unlike the movie, would rather live an ugly truth than a pretty lie.
B+
Posted by AnimeJune at Saturday, September 10, 2011

Labels: B Plus Reviews, Movies, Romance