"The Girl Who Circumnavigated Fairyland in a Ship of Her Own Making," by Cathrynne M. Valente 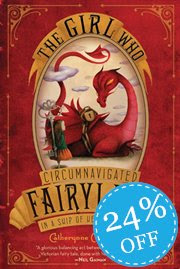 The Protagonist: September Morning Bell. A partially Heartless little girl in WWII-era Nebraska who gets the chance to escape her boring life and fly off into Fairyland.The Rub: Living a fairytale adventure is exciting, but a happy ending isn't necessarily guaranteed.
The Secondary Cast:

Ell, a.k.a. "A-through-L": A half-wyvern son of a library with encyclopedic knowledge (except for things beginning with M and beyond).

Saturday: A marid - a wish-granting water spirit who is rescued by September.

The Green Wind: A jolly air spirit to steals September off into Fairyland and lends her his sentient smoking jacket.

The Leopard of Small Breezes: A large cat who, with the Green Wind, helps September fly through Fairyland.

The Marquess: A curly-haired little girl who is not nearly as kind and forgiving as September - she rules Fairyland with a tiny, soft, adorable iron fist.

1 Surprise Appearance of an Offspring

The Word: I adored Cathrynne M. Valente's The Orphan's Tales, the groundbreaking, soul-shattering two-volume collection of stories-within-stories-within-stories, so when I was offered the chance to review a copy of her new children's book, The Girl Who Circumnavigated Fairyland in a Ship of Her Own Making, I knew this was an opportunity I couldn't pass up.

What little I knew of the book before going in was that it was an attempt to recreate the Victorian/Edwardian children's novel - and, true enough, The Girl nails that balance between sugar-coated whimsy and razor-sharp menace. Some of the best horror of 19th and 20th century literature (and film!) was made for children. And even though most contemporary stuff tries to keep the scary bits out, that only means that kids will go looking for it somewhere else, because being a child is the absolute best time to have the pants scared off you by books.

In my elementary-school and junior high days, I turned to R.L. Stine - and not even his goofy-scary Goosebumps series, but his older, teenage-slasher books where stepsisters and ex-boyfriends and mysterious foreign exchange students stabbed the more interesting characters until the less interesting characters found them out and reported them to the authorities.

I used to think that I didn't want to be scared or disturbed anymore. Heck, I don't like trying any carnival rides riskier than the merry-go-round. But with people like Neil Gaiman (Coraline) and now Cathrynne M. Valente bringing it back, it's past time to rediscover just how well a little terror can spice up a thrilling adventure.

Our protagonist, September, is swept away from a normal, boring life in Nebraska by the Green Wind, and this ill-tempered, well-read, and mostly Heartless youngster (a term very likely borrowed from J.M. Barrie, whose Peter Pan was all about how children are voracious little sociopaths before maturity grants them a conscience) finds herself in Fairyland. But this isn't Disney's Fairyland - this is Old School fairyland, where there are sharp teeth behind every smile, tricks hidden beneath every treat, and very real, dangerous consequences for every decision September makes.

While searching for an adventure, September captures the attention of the Marquess, the tyrannical young despot who rules Fairyland with an iron fist and a splendid hat. This solves September's quest for a quest rather nicely, as the Marquess has definite plans for September and not all of them involve September surviving until the end.

Besides borrowing from Peter Pan, Alice in Wonderland, Narnia, Greek mythology, fairy folklore, and dozens of other stories, Valente's storytelling also succeeds because it maintains an undercurrent of reality that follows September around the labyrinth of fantasy like Ariadne's thread. Although September is at first apathetic towards the life she left behind, it subtly seeps into her memories, behaviour and consciousness regardless, such as her fears for her father (who is fighting overseas) and her isolation from her mother (who fixes machines in a factory).

And September herself is a tough, resourceful little nut - a nice, modern change from the sweet-natured little Pollyannas who normally tumble down rabbit holes and walk through wardrobes and get carried away by tornadoes. As the novel progresses, September is forced to make some drastic, painful changes in order to rescue her friends, most especially in how she creates that "ship of her own making" - but I won't spoil that for you.

As much as I loved this book, I could just have easily have hated it. A book like this requires a delicate balance between a number of factors, but Valente pretty much nails it - it's old-fashioned while still being relevant, the worldbuilding is fluid without being inconsistent, the language is self-referential without being twee, and while it subtly and not-so-subtly references a number of previous books and materials, it still remains its own original creation.

I honestly can't describe any more of the book to you - that would be an immense disservice, because, like Narnia and Oz, the joy comes from exploring the discovering Fairyland on one's own. The Girl Who Circumnavigated Fairyland is a lively literary gumbo that will not only have you racing through it, but will have you poring through the children's section of your library to re-read the classics that brought both you and Cathrynne M. Valente to this point.
A+
Posted by AnimeJune at Sunday, September 25, 2011