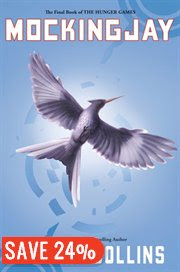 The Heroine: Katniss Everdeen, the Girl on Fire - a.k.a. "The Mockingjay." Due to her actions in both of her Hunger Games, she is now the face of a revolution that could finally topple the tyranny of the Capitol.
Her Angst: Her face, unfortunately, is more important than her actual actions - her handlers are more concerned with keeping her in the limelight than actually having her fight or help.

The Secondary Cast:
Gale: Katniss' right-hand man and a highly-ranked soldier in District 13's war with the Capitol.

Peeta: Currently in Capitol custody, probably under torture, thanks to the rebels' failure to rescue him from the Quarter Quell.

President Alma Coin: The leader of District 13, she's willing to use Katniss as the figurehead of the rebellion, but she's got a personal agenda of her own when it comes to the war and the future of Panem.

Prim: Katniss' sister - now training as a medic to help the rebel cause.

Finnick: One of the former victors of the Hunger Games to survive the Quarter Quell with Katniss. While definitely an ally, he's still recuperating mentally and physically from his ordeal.

Johanna: Another former victor. Mayor of Bald Crazy-Through-Torture Town.
The Word: I didn't like this book.

No, I didn't like this book - and the strong start of The Hunger Games is partly to blame. The first novel created a heroine of such strength and determination, that it made her lack of agency in this book that much harder to swallow. I was less tolerant of the flaws of this book because I knew how good it could be, and was frustrated when it wasn't.

District 12 is in ruins after being firebombed by the Capital, and Katniss is now living in District 13, the "secret" district that rebuilt itself underground after being nuked by the Capital years ago. The people of this district, however, are ready to come out of hiding and end the rule of President Snow once and for all - and they want Katniss to be the Mockingjay, the face of the revolution that everyone in the world instantly recognizes.

And I have no problem with that. The actual worldbuilding in The Hunger Games trilogy is pretty shaky - its strong point has always been how it explores the social aspect of government-sanctioned violence. In Mockingjay, Katniss' image is just as important as it was in the first book, as footage of her fighting Capital troops can stir up the people when released to the media at the correct moment. It also means, however, that Katniss' handlers are eager to put her in the spotlight but loathe to send into her into actual danger.

This would be fine if this was just the introduction of the novel, but the first, oh, 70% of Mockingjay is a) Katniss being moved to a strategic point and acting like a good obedient puppet (albeit one with angsty thoughts), b) something going drastically wrong, ending with a minor character dying in a ridiculously over-the-top way, or c) Katniss doing something stupid and winding up in the hospital for pages and pages after, and the cycle restarts anew.

The remaining 30%, of course, is a wildly inventive, fast-pasted, gratuitously violent and heartbreaking climax that, if you've carried any emotional investment at all for any of the characters, will tear you inside out. If only the lead up to it was less sluggish and boring. And if only Katniss had more control over it. Much like Catching Fire, Katniss is removed from the majority of the major action in the novel. Until the last third of the novel, it still felt like the real story was happening off-screen and we just had to experience it third-hand from Katniss' handlers.

And through it all, Katniss is just trying to keep the pieces together. In the case of Mockingjay, I think the realism Collins tried to impart onto her narrative actually hindered how I enjoyed the book. Katniss deals with repeated traumas in a very understandable and realistic way - she is put through the physical and emotional and psychological wringer. She is butchered and burned and cut up and abandoned and frequently suicidal and witness to countless atrocities.

But the constant pressure lends her character a note of tedium. I wondered who she really was when she wasn't busy reacting to something awful. The one time she is asked to make a significant choice about Panem's future (near the end, with her vote being the deciding one), she goes with a choice that made me instantly lose all respect for her. I wondered, Is this the person she really is? and realized I still wasn't completely sure.

But Gale and Peeta are two of the best-developed love interests I have come across in fiction. Neither of them is the obviously wrong or obviously right choice. They both come from different worlds and upbringings and contribute their own unique takes to the world. Gale is the revolutionary. Peeta is the diplomat. Honestly, Gale has the balls to force a change in the horrid status quo, but Peeta has the smarts and social far-sightedness to make that change stick. Gale is the lifelong friend. Peeta is the obstacle turned ally.

And finally, they both love and (more importantly!) respect Katniss. There's refreshingly little dick-waving or "YOU HAVE TO CHOOSE" moments. I really enjoyed that. Neither of them tried to force the issue or guilt Katniss. And I have to say, while I agreed with Katniss' ultimate choice, I really, genuinely liked both boys as independent characters, not just as love interests.

Okay, so I didn't really like the experience of reading Mockingjay. It was tedious and frustrating for the most part, and the ending, while cathartic, seemed a little rushed and random. However, as the final entry in the series, it's a fascinating endpoint. The trilogy as a whole is a creative and engaging examination of cultural morality, social media, organized violent sports, and how good intentions in the wrong hands can lead to bad ends.

Mockingjay by itself: C+

The Hunger Games Trilogy: B+
Posted by AnimeJune at Wednesday, March 07, 2012