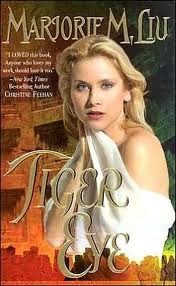 The Chick: Delilah "Dela" Reese. A skilled metalsmith vacationing in Beijing, she is talked into buying a mysterious riddlebox at a local market by a mysterious old woman.
The Rub: The box releases a powerful warrior cursed to serve her every whim, but can he protect her from assailants who also want the box - or who have a personal vendetta against Dela herself?
Dream Casting: A younger Gwyneth Paltrow.

The Dude: Hari. A tiger shapeshifter cursed into eternal servitude by an evil Magi, he is bound to Dela until the end of her days, regardless of either of their wishes.
The Rub: While Dela is kind to him, his experience tells him it's only a matter of time before the temptation to command him grows too great.
Dream Casting: A younger Keanu Reeves with flashy highlights.

Dela: Sure! What could possibly go wrong?

Hari: I am cursed to serve you hand and foot, shall I commence sexual stimulation while wearing an expression of total and profound disgust?

Dela: Wow, not so sweet.

Dela: Oh no, let me defend you! For as a seven foot tall trained warrior with 2000 years of experience, you are far more susceptible to pain and injury than an unarmed blonde woman!

Hari: After 2000 years of torment, your insane and unreasonable Mary Sue Martyr tendencies are strangely appealing!

Dela: Let's get out of China!

Three Hot Sequel Baits: Hey Dela! Let us protect and cherish you, in a totally platonic and angsty way!

Hari: I am totally cool with this - they are clearly destined for future novels.

Hot Sequel Baits: Someone's trying to kill you - because someone used one of your artsy knives to kill a child!

Dela: WHAT?! Someone used a SHARP METAL BLADE that I fashioned into an item EXPRESSLY DESIGNED FOR CUTTING AND STABBING THINGS to do just THAT? My world is falling apart!

Hari: Well that was easy!

Antagonist #3: Despite having no build up or true motivations and only sporadic appearances throughout the novel, it turns out I'm your big bad! Watch as I tell instead of show you what happened to me because I'm obviously just a narrative plot device whose motivations remain pretty sketchy!

1 Use of The "Love Fixes Everything" Cure-All

The Word: It's always interesting when one finds a favourite author, because no matter how awesome an author and some of their books are, everyone has their bad days. All books aren't created equal. It's even more interesting when it comes to evaluating a favourite author's series, and how the quality degrades or evolves from the first book onward.

I started on the eighth book of Marjorie M. Liu's Dirk & Steele series, then moved on to the ninth. They were both excellent paranormal romances, and this comes from a gal who does not often enjoy paranormals. So I thought I would see where the series started, and went to the very beginning with Tiger Eye, and was intrigued with the result.

Dela Reese, an artist with the psychic ability to manipulate metal, is vacationing in China when an old woman convinces her to purchase a mysterious, beautiful riddle box. Soon after, she is attacked by a malevolent stranger but she escapes. Back in her hotel room, she manages to open the box and is astounded when a super-hot, 7-foot-tall man-genie with awesome highlights appears.

Okay, so he's not technically a genie, just a tiger shapeshifter (hence his crazy striped hair) cursed by an evil Magi to serve whomever opens his box, but that's close enough. Hari has endured 2000 years of torment as a slave, bodyguard, hired killer, and very reluctant lover to a parade of cruel, bloodthirsty masters, and he expects Dela to be no different.

Dela, however, is appalled at Hari's curse and all-but-literally clasps the poor, tormented mankitty to her bosom. All bosom-clasping is put on hold when another mysterious assailant tries to kill Dela - with a dagger she herself designed. With Hari's help, they escape, and Dela calls her pals at Dirk & Steele (the world's only Secret Magical People Detective Agency) to help them out of this jam.

I'll be honest and flat-out say that Tiger Eye was not to my taste. It had an interesting setting, a solid mystery, and beautiful writing, but dull characters and superficial characterization. Dela just plain annoyed me. I felt I was being told she was a tough, independent, smart character while being shown that she was a naive, inexplicably innocent and easily-bruised Mary Sue whose only flaw is Caring Too Much. When she learns that one of the weapons she forged was actually used in a crime, she acts all appalled and surprised - while I kept thinking, if you hate violence so much, WHY DO YOU MAKE WEAPONS FOR A LIVING? There are a MILLION other things you could do, artistically, with metal!

I also felt her romance with Hari was very simplistic. She is literally the only person who has ever been kind to Hari in the entire 2000 years of his imprisonment, and before you know it love bounds in on heavy tiger feet and they're both perfectly in sync by the halfway mark. The attraction is very much of the "you are pure kindness and light," "you are pure bravery and sacrifice bound up in angsty pain I will heal with my pure kindness and light" variety. Again, it's not badly written, it's just not to my taste at all.

It makes the rest of the book pretty dull in terms of romantic development. What relationship obstacles they have seem token and easily brushed aside. Ultimately, they're too busy fending off assassins and bantering with the Three Sequel Baits (three hot dudes from Dirk & Steele who are friends with Dela) to really worry at or build on their relationship past It's True Love. As for fantasy elements, they're okay but the flaws show here and there - mostly in the presentation of the novel's main antagonist, a cartoonish, sketchily-drawn villain.

What interests me about my reaction to Tiger Eye is that it seemed, to me, to be very conventional. While the language reveals burgeoning amounts of the linguistic grace Liu would put to good use in later books, the use of language and the plotting and the development of the romance was very derivative, and even cheesy. All the hallmarks of a standard paranormal starter are there - copious amounts of exposition, hot super-powered angsty manfriends fated for their own sequels, obvious plot threads left tantalizingly dangling by novel's end.

But when I think about it, it makes sense. An established, successful author can take more risks, be more creative and defy more conventions because she already has a demonstrated regular readership. Someone just starting out with a series would still be required to be original and creative (of course!), but I think maybe they're expected to follow the more established "rules" of what's popular and desired in their genre because they're just starting out, and have to hook an entirely new pool of readers who have no prior experience with them.

Take it from me, though, when I say that her series has nowhere to go but up from Tiger Eye.
B-
Posted by AnimeJune at Wednesday, March 21, 2012