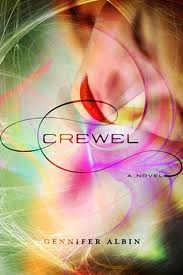 The Protagonist: Adelice Lewys. While born with a miraculously powerful ability to weave the fabric of reality, her parents have taught her to suppress it to avoid calling attention to herself.
Her Angst: Unfortunately, the government finds out about her powers and proves willing to do just about anything to control it for themselves.

Amie: Adelice's little sister, who is captured by the Guild after their parents try to protect Adelice from being taken away.

Maela: Adelice's superior, and an insanely power-hungry villain who may or may not be anger-banging her personal assistant.

Erik: Maela's personal assistant, who may or may not be getting anger-banged by her, all the while trying to love-bang Adelice with his eyes. Love Interest #1.

Jost: The head valet of the Coventry, assigned to care for all the Spinsters. Gruff, but kind - and fully aware of the Guild's evil ways. Love Interest #2.

Cormac Patton: The leader of The Guild, who has a definite thing for underage girls.

Loricel: The Creweler - the one Spinster capable of creating (rather than just re-weaving) raw matter. Without her, their world is toast, and she's not a spring chicken anymore.


The Word: I really wanted to like Crewel. It seemed to have such an interesting story - in an alternate world, the fabric of reality itself is maintained and woven by powerful women known as Spinsters, and every girl who demonstrates potential for weaving is taken away at the age of sixteen to train in the Coventry to help maintain the ordered nature of their world.

Unfortunately, Crewel turned out to be a dud for two major reasons. Firstly, it tries way too damn hard to be The Hunger Games. Secondly, for all of its colourful attempts to present gender roles in an interesting way, it only ends up solidifying sexist ideas.

In the dystopian world of Arras, Adelice Lewys returns home after being tested for Spinster abilities, unwilling to tell her parents that she failed. Not that she failed to prove herself a Spinster - but the very opposite. She failed to hide the amazing weaving skills her rebel parents have trained her to repress since childhood, and she can't bring herself to tell them that the Guild will soon be coming to take her away.

Which turns out to be a monumentally stupid decision, since once the Guild shows up, her parents resist and her father winds up murdered. Captured and sedated, Adelice is dragged off to the Coventry against her will.

As Adelice quickly learns, the Spinsters and the Guild can control the very weave of reality itself, and they use this phenomenal cosmic power to make life harder for just about everyone in existence. Not only can they kill people from a distance (by "ripping" their threads), but they can rewrite people's very identities. Revolution is impossible because Spinsters can even "spot" treasonous thoughts because they cause a person's thread to change colour. Even though Adelice has the potential to be an incredibly powerful Spinster, she has no desire to play God or by the Guild's rules.

Now, all of this would be lovely and exciting, except that the storytelling in Crewel is incredibly derivative of its literary predecessor, The Hunger Games. See if any of this sounds familiar - Crewel has:
As well, I found the gender dynamics of Crewel were incredibly troubling and hypocritical, even though the unfair treatment of women seems to be a major theme of the novel. The society of Arras is incredibly repressive towards women: girls are segregated from boys and held to high "Purity Standards." The only jobs available for women are as as secretaries, teachers, nurses, and factory workers. In fact, most people in society want their daughters to become Spinsters, since it seems to be a far more powerful and influential position than any woman could expect otherwise.

And yet, almost every female character other than Adelice is either a) a shallow twit who cares only about make-up and clothes, b) an evil power-hungry slut, or c) a victim.

Every woman who is depicted as ambitious, as wanting more than what the male establishment allows her to have, is not only written as a villainess, but as a sexually aggressive and/or promiscuous one. Maela is the main baddie - a violent and unstable psychotic who apparently keeps Erik (Adelice's Love Interest #1) as a sexual plaything while secretly wishing to be the wife of Cormac Patton (the President Snow leader of the Guild).

Second to that is Pryana. Pryana - without actually doing anything evil  - is depicted as evil and inferior to Adelice because she uses men's physical attraction to her to gain power for herself, such as when she dances and flirts with (gasp!) ugly, old, fat men at a social function while Pure Heroine Adelice only dances and flirts with thin, young, hot boys. Oh, and Pryana likes shopping, clothes, and looking hot! TOTALLY EVIL, right?

Because Adelice, our heroine, is such a fine, upstanding individual. So selfless, so caring. So in love with burly, rebellious valet Jost, who tragically lost his teen bride and baby daughter to the Evil Guild of Evil. Yet when our Selfless, Caring Heroine discovers her Super-Special-Spinster powers don't involve time-travel, her first thought is relief because if she had the power to go back in time and save Jost's family, she's not sure she'd be able to do it.

I am dead serious. Adelice, our heroine, is glad that she doesn't have the power to go back in time and save her OWN family, because it would also mean she would have to save THE WIFE AND BABY of the boy she has a crush on. Really. REALLY. TOTALLY SELFLESS HEROINE, right?

But what about the Spinsters? They have the power to control weather, transport matter, rewrite existence, and even read people's intentions in the colours of the threads. Surely there must be a girl-power reason that all Spinsters are women? There is! As Adelice discovers, the (entirely male) Guild only chooses to train women as Spinsters because women are more easily controlled.

I almost threw this book at a wall.

I am not even kidding. That is seriously the book's worldbuilding. Women, apparently, are chosen to be Spinsters not because only women have this power but because women are just naturally more easy to manipulate than men. Just dangle some diamonds and Colin Firth DVDs in front of their faces and they'll do anything, am I right ladies?! Women won't care that they're murdering people or ripping entire societies out of existence so long as those hot baths and foot rubs keep coming!

Do yourself and your ovaries a favour - avoid this misogynist Hunger Games rip-off.
C-

You can purchase Crewel here. But don't say I didn't warn you.