"The Blessed," by Tonya Hurley 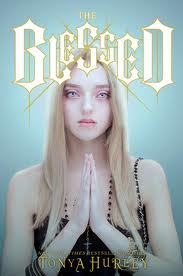 Agnes: Even though her suicide attempt fails, this naive Catholic schoolgirl still holds out hope that true love exists. But why is she drawn to this strange church during a hurricane?

Cecilia: An underground musician who's left to drown in a puddle and wakes up in the hospital with a strange new purpose. Just don't let her go near any open iron maidens, she's super clumsy. You can get stigmata from those things!

Sebastian: The book's Hot Male Mentor and designated Catfight Lightning Rod, Sebastian escaped from a psych ward to find our three heroines and inform them of their destinies - in the slowest and vaguest way possible.

Dr. Frey: An eeeevil psychiatrist whose motivations and allegiances remain unclear for the entire book. His villainy's demonstrated by his desire to, uh, prescribe the proper treatment and medication for mental illness. Apparently treating mental disorders should be left up to Jesus. It says a lot about this book that his weapons of choice against our heroes are logic and medical reasoning. If logic is an enemy to your story, you need to look at your book, and look at your writing choices.

Tweet It! My livetweets reading this hot mess are Storified here.

The Word: I spent about 4 hours figuring out how to write this review. How best to convey the utter disgust and rage I felt reading this terrible, offensive, insane-in-the-membrane book. I must have stopped and started a dozen times. Finally, I decided to keep it simple, and let the madness flow out of me naturally.

I was actually excited to read this book, if you can believe it. As a practising Catholic who is also writing a novel about saints for NaNoWriMo, I thought this book (which I picked up at BookExpo America) would provide the perfect creative inspiration.

Our three "heroines" (and I use that term extremely loosely) all wind up in the ER on the same night after their Darwinian attempts to remove their defective genes from the YA Heroine gene pool failed - Agnes tried to kill herself to spite her mother and her ex-boyfriend, Cecilia the pretentious-preachy indie musician drunkenly drowned in a puddle, and professional famewhore Lucy accidentally overdosed at a club.

While convalescing, they each mysteriously receive a strange bone chaplet with a unique gold charm on it that draws them to a run-down church in Brooklyn.

Now, in a decently-written YA, this would start the plot going and lead these heroines on a journey to find out who they really are and what their purpose is. However, that would require writing and developing a female character deeper than the layer of dust this book will soon acquire at the Used Book Store. And why do that when it's so much easier to describe their designer outfits or the expensive furniture and accessories in their bedrooms?

To save on having to give the protagonists enough character development to motivate their own choices, the book has the heroines do things because they mysteriously "feel" that they should, or because a vague force compels them to make uncharacteristic decisions.

It's thanks to these inexplicable plot contrivances that our booze- and pretension-addled heroines wind up in a decrepit old church where a Hot Mysterious Male Mentor Figure named Sebastian awaits. Because he is a Male Person with Abs, it takes about five minutes before all three of our heroines are venomously catfighting for his attentions.

And that's pretty much the book. All these girls do is snipe at each other, fawn over Sebastian, and find new and Catholic-inspired ways to hurt themselves.

No, really. The Blessed is aggressively, offensively stupid for a number of reasons - the vapid and unpleasant heroines, the grotesque random violence, the wonky plotting, the overly-vague and half-assed world building, and the amateurish writing larded with unnecessary adjectives and speech tags.

Worse, The Blessed fails because nothing of note really happens for the vast majority of it. Sebastian waves his arms around and makes a lot of open-ended and non-specific statements about finding a destiny, and it takes him until nearly the very end of the book to reveal what the cover artwork, book marketing, and back cover blurb already did: that the heroines are the reincarnations of the Saints Agnes, Cecilia, and Lucy.

So for the first 300 pages of this book there is no conflict, there is no explanation, there isn't even any development of the very, very slight supernatural plot.

Even by the end, the worldbuilding is laughably threadbare - Agnes, Cecilia and Lucy have to save the world by doing, uh, good stuff, and by fighting the evil people who are hunting them, er, because they're just evil. What, were you reading this book hoping to learn something?

Plus, if one of the girls dies, the whole world is screwed. Because it's not like there are literally hundreds of other saints waiting in the wings. Or, you know, Jesus. He's usually on hand for these world-ending events. Unless, of course, the author just pilfered random bits of Catholicism without grounding it in any sort of internal logic or actual research. Gee, wouldn't that be offensive?

Honestly, The Blessed is just a heinous mess of random unpleasantness strung together with pseudo-Catholic-hipster pretension. It's ugly and convoluted and disorganized and violent and pointless. It portrays girls as glitzy objects of ridicule who are destined to be brutally victimized. The narrative has no established purpose until the very end and even then it cannot conclude it.

I suffered this book so that hundreds of thousands of you could be spared. Don't let my miraculous sacrifice be in vain.

Avoid this book, in memory of me.
F
Posted by AnimeJune at Thursday, November 15, 2012